G.M. and U.A.W. Reach Deal That Could End Strike 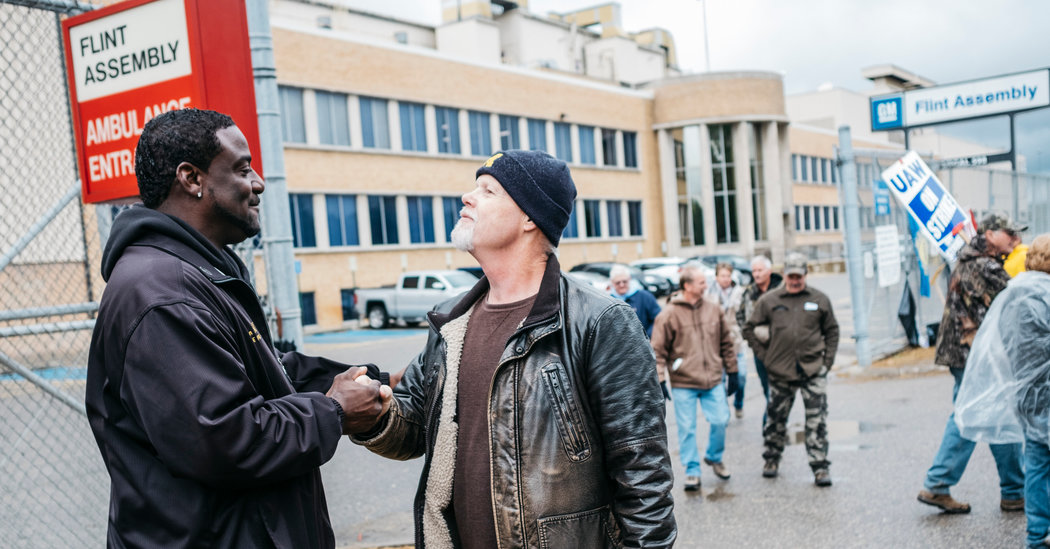 General Motors and the autoworkers’ union, confronting a period of flagging sales after years of record profits, reached a tentative contract deal on Wednesday that could end the company’s longest strike in half a century.

The four-year agreement provides for a signing bonus of more than $8,000, as well as wage increases of 3 percent in some years and lump-sum payments of 4 percent in others, according to people familiar with the terms. They said it also included a path to permanent employment for temporary workers.

The United Automobile Workers, in announcing the agreement, said it had “achieved major wins.” It plans to lay out the terms to representatives of its G.M. locals at a meeting in Detroit on Thursday morning, a chance for the leadership to frame the victories it feels it won.

G.M. confirmed the accord in a terse statement. But it was not clear how some of the most contentious matters — like narrowing pay gaps between long-term employees and more recent hires, and G.M. commitments to domestic production — had been resolved.

The stakes were high for both sides. G.M. must plan around a sales slowdown in the United States and China, and the need for big investments in electric vehicles and self-driving cars. And the autoworkers were intent on getting a bigger share of the gains the company has made since its bankruptcy a decade ago.

The walkout has left a mounting economic toll since it began on Sept. 16. It has cost the union, its members and G.M. itself hundreds of millions of dollars in lost dues, wages and revenue, and has idled truckers and suppliers that serve the automaker.

The local leaders could decide Thursday to end the strike immediately or to wait until the contract is ratified by G.M.’s 49,000 union members. The U.A.W. will then turn its attention to Ford Motor or Fiat Chrysler, seeking similar terms.

Wiley Turnage, president of Local 22, which represents 700 workers at G.M.’s Detroit-Hamtramck plant, said he hoped that his members could get back to the assembly line quickly. But he said he needed to review the details of the tentative agreement before deciding whether to vote in favor of it on Thursday — including whether it commits G.M. to keeping the Hamtramck plant open.

“It has to be fair to our members,” he said.

The U.A.W. chose G.M. as its initial contract target because the company has closed plants in the United States this year, and over the last several years has substantially increased production at its four plants in Mexico. The union pointed to G.M.’s record profits in North America and more than $10 billion in stock buybacks since 2015.

With negotiations at an impasse last month, the union declared the first nationwide strike against a Detroit automaker since 2007. The talks appeared to turn rancorous, at least episodically, with the union negotiator declaring this month that the U.A.W. “could not be more disappointed with General Motors.” G.M.’s chief executive, Mary T. Barra, inserted herself directly into the talks on two occasions over the last week.

One of the union’s aims was to reduce pay disparities between those hired before and after 2007, when a two-tier pay scale was negotiated to help ease G.M.’s financial distress. The union also wanted G.M. to make firm commitments to producing future vehicles in the United States, but said the company had resisted doing so.

G.M. entered the talks hoping to reduce its health care costs and limit increases in wages and benefits. Last week the company said it had offered to invest $7.7 billion in its domestic plants from its own coffers, and $1.3 billion through ventures with other companies, including a battery plant that would hire union workers under a separate contract. It proposed to locate that plant near Lordstown, Ohio, where a G.M. factory assembling the Chevrolet Cruze ceased production this year.

The tentative agreement, if it becomes final, would solve the most immediate challenge facing Ms. Barra, and should provide certainty in calculating labor costs over the next four years.

“It’s critically important to have certainty about the costs the manufacturers have to plan for,” said Mark Wakefield, a managing director at AlixPartners, a consulting firm with a large automotive practice. “It’s important to get a deal that’s fair and equitable, but also one that doesn’t put you at a competitive imbalance.”

When G.M. and the U.A.W. last negotiated a contract in 2015, a tentative settlement failed to win ratification, and the terms had to be reworked. But the workers never walked out, as they had for 67 days in 1970, when their ranks exceeded 300,000.

The U.A.W. is likely to try to hammer out similar terms with Ford and Fiat Chrysler, a standard practice known as pattern bargaining. Those talks may be smoother because the two companies have done less than G.M. to shift production south of the border. Ford, in fact, canceled plans to build a new plant in Mexico, and Fiat Chrysler has chosen to put a new Jeep factory in Detroit.

In the last five years, as American consumers flocked to high-margin trucks and sport utility vehicles, both G.M. and its unionized work force have prospered. In the last three years, G.M. has made $35 billion in profit in North America, and workers have been given profit-sharing checks averaging $11,000 a year.

But even though G.M. was scaled down in bankruptcy, it still has excess production capacity. The company has enough plants to make about one million more vehicles than it is selling, according to the Center for Automotive Research, an independent, nonprofit group.

At the same time, G.M. is spending heavily to develop electric vehicles and self-driving technology, and its business outlook is uncertain. Auto sales have slowed in the United States, and some analysts expect a substantial decline in new-vehicle sales in 2020. Sales in China, the world’s largest auto market, have also softened.

Mr. Wakefield said automakers were expected to spend some $225 billion over the next five years on development of electric and self-driving vehicles. “Industry profit is still good, but it’s down from its peak of a few years ago,” he said. The combination of heavy spending and slowing sales “has created some problems for them.”

That’s one reason that G.M. has been eager to retain flexibility in the size and deployment of its work force. Among the issues in dispute was the extent of G.M.’s use of temporary workers — now 7 percent of its head count — and their path to full-time status.

Marisol Gonzalez-Bowers worked for G.M. at Lordstown for about 24 years, most recently in “materials,” transporting parts to the assembly line. Relocating after the shutdown, she recently took a job at the company’s Lansing Delta Township plant in Michigan, where she was trained to assemble the insides of doors — the wires and plugs. Her trainers were almost all classified as temporary workers, she said, though they had been there four years.

[Watch the back story of G.M. and its workers’ fight for survival in Lordstown on this episode of “The Weekly,” The Times’s new TV show.]

“They’re working their butts off,” Ms. Gonzalez-Bowers said — and “making half my wages.”

Most temporary workers earn $15 an hour, compared with roughly $31 an hour for workers hired before 2007. Most permanent workers hired after 2007, known as “in progression” workers, earn about $17 to $25 an hour.

Veteran workers are guaranteed pensions in retirement. In-progression and temporary workers have 401(k) accounts to which they contribute.

Robin Sweet, an employee at a Ford Ranger plant in Wayne, Mich., said workers were upset at both the automakers and the union for not doing more to make them whole after the concessions made during the last downturn. “We want that money back in our pay,” Ms. Sweet said in a text message.

The agreement with G.M., even if followed by accords with Ford and Fiat Chrysler, won’t end the strain on the U.A.W. president, Gary Jones, and several of his top lieutenants. A federal criminal investigation has yielded corruption charges against several union officials over the last four years, including a union vice president who was sentenced to 15 months in prison.

The scandal “is concerning to the membership,” said Kristin Dziczek, vice president for industry, labor and economics at the Center for Automotive Research. “It’s cast a shadow, and hangs over the union, and appears to ensnare high-ranking officials.”

The G.M. strike was the latest push by labor for a larger share of the billions of dollars in wealth created as the United States recovered from the recession of a decade ago.

On Saturday, about 3,600 U.A.W. members went on strike at Mack Truck plants in three states, demanding better wages and benefits.

Last year, teachers in West Virginia, Oklahoma, and North Carolina secured better working conditions after walking off the job. And grocery workers in Southern California narrowly averted a strike this month when the United Food and Commercial Workers union reached a deal with several California supermarkets. The new contract includes wage increases totaling $1.55 to $1.65 an hour over three years, as well as improved health care benefits and pension contributions.

Rajiv Bajaj takes a dig at an electric and established two-wheeler company: Here’s what he said