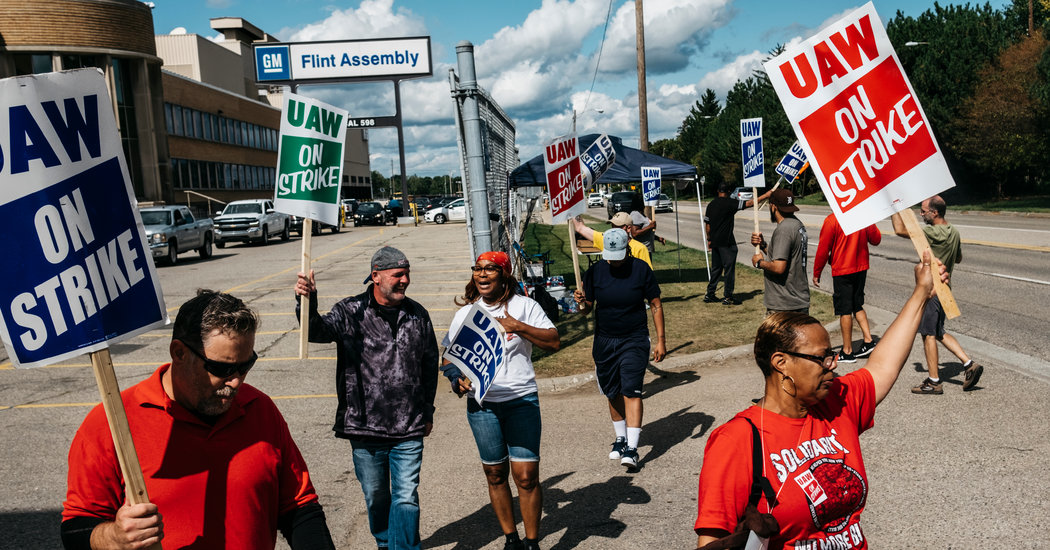 General Motors said Thursday that it would continue health care coverage for striking workers, reversing an earlier decision, as the company and the United Auto Workers union negotiated a new labor contract.

The company said last week that it would cease payments providing coverage at the end of September, prompting the union to scramble to arrange temporary health insurance for the 49,000 factory and other workers who walked off the job on Sept. 16.

G.M. said it realized the pending switch was causing confusion for workers and health care providers. “Given that confusion, G.M. has chosen to work with our providers to keep all benefits fully in place for striking hourly employees, so they have no disruption to their medical care, including vision, prescription and dental coverage,” a spokesman said in an email.

In a letter to G.M. on Thursday, Terry Dittes, the union vice president leading the negotiations, complained that the automaker was “toying” with the lives of union members with the back and forth on health coverage. “There is no doubt that public sentiment sees these actions of G.M. as a shameful act!” Mr. Dittes wrote.

In the contract talks, the union is pushing G.M. to increase pay for temporary and less-senior workers, reopen plants it has idled and allot more future production to factories in the United States instead of those it operates in Mexico. G.M. would like to limit wage increases and cut health care costs. It has closed or idled three plants in the United States to bring its production capacity in line with slowing sales across the nation and elsewhere.

The two sides have come to basic agreements on topics that had been discussed by committees of G.M. and U.A.W. negotiators, Mr. Dittes said in a letter to workers on Wednesday. The talks were shifting to what is known as the “main table,” where negotiators face off in a single room.

“All unsettled proposals are now at the main table and have been presented to General Motors, and we are awaiting their response,” he wrote. “This back and forth will continue until negotiations are complete.”

People close to the talks said that while they were making progress, it might take at least a few days to reach agreement on the remaining issues.

[Read more: Key points about the strike at General Motors.]

Workers continued to picket at G.M.’s 34 factories and other locations in the United States. Striking workers qualify for weekly payments of $250 by the U.A.W., a quarter or less of what most typically take home.

Once a tentative agreement is reached, union leaders must vote to end the strike before workers can return to the assembly lines. Workers would then vote on ratifying the contract.

After the union reaches an agreement with G.M., it will turn to talks with Ford and Fiat Chrysler. Union members at those two companies have been reporting to work without a new contract while senior U.A.W. officials focus on G.M.

The talks are taking place amid a federal investigation into corruption involving the use of union funds for lavish personal travel and spending. So far, 11 people have been charged, including three Fiat Chrysler officials. Homes owned by the current U.A.W. president, Gary Jones, and his predecessor, Dennis Williams, were raided last month, although neither man has been charged.

G.M. Strike’s Economic Toll Is Showing: ‘I Might Lose the Business’