G.M. Strike’s Economic Toll Is Showing: ‘I Might Lose the Business’

The truck drivers at Phoenix Transit & Logistics in Dearborn, Mich., are long gone. Around three dozen of the trailers they once ferried between auto plants — packed with dashboards, engine components, lights and other parts for General Motors — are sitting in a lot with nowhere to go.

It’s an increasingly familiar scene as the strike against G.M. by the United Auto Workers enters its fourth week. From suppliers to shippers to restaurants, the impact of the work stoppage is spreading through the web of businesses whose fates are tied to the biggest American automaker.

Wael Tlaib, the owner of Phoenix Transit & Logistics, said he had laid off nearly his entire staff, including 80 drivers, and had dipped into his personal savings to keep his company afloat. “I might lose the business next week,” Mr. Tlaib said.

The most intense economic pain is being felt in the industrial Midwest, where G.M.’s network of plants and suppliers is thickest. It is a difficult time for the region’s manufacturing industry, which even before the strike was contending with slowing auto sales, a weakening global economy and the trade war.

An economic blow to the Midwest would have broad consequences in part because the region is an important political battleground that will help determine who wins the 2020 presidential election. In 2016, President Trump’s narrow victories in Michigan, Pennsylvania and Wisconsin put him over the top in the Electoral College tally.

The state of the auto industry “usually has political ramifications that are beyond its direct economic influence,” said Matt Grossmann, a political-science professor at Michigan State University. “A lot of Democrats here are running on the promise to help the factory workers and the working class, and saying Trump hasn’t done it.”

Nearly 50,000 U.A.W. members walked off the job on Sept. 16, the largest stoppage since G.M. workers went on strike in 2007. The union is pressing for more job security as well as the reopening of plants in the United States that the company has recently idled. For its part, G.M. wants to limit wage increases, slow the growth of health care costs, and gain flexibility in how plants are staffed and operated.

After signs of progress over the last week, the two sides hit a roadblock this weekend on how production might be moved to the United States from Mexico. Terry Dittes, the U.A.W.’s lead negotiator, said on Sunday that the talks had taken a “turn for the worse.”

The impact of the strike stretches from Mexico to Canada, where G.M. plants that depend on American factories have been shuttered, putting thousands out of work. Analysts estimate that G.M. has lost $600 million as a result of the strike.

In the United States, 34 G.M. plants have gone dark. And striking workers are making do with a $250-a-week subsidy from the union. 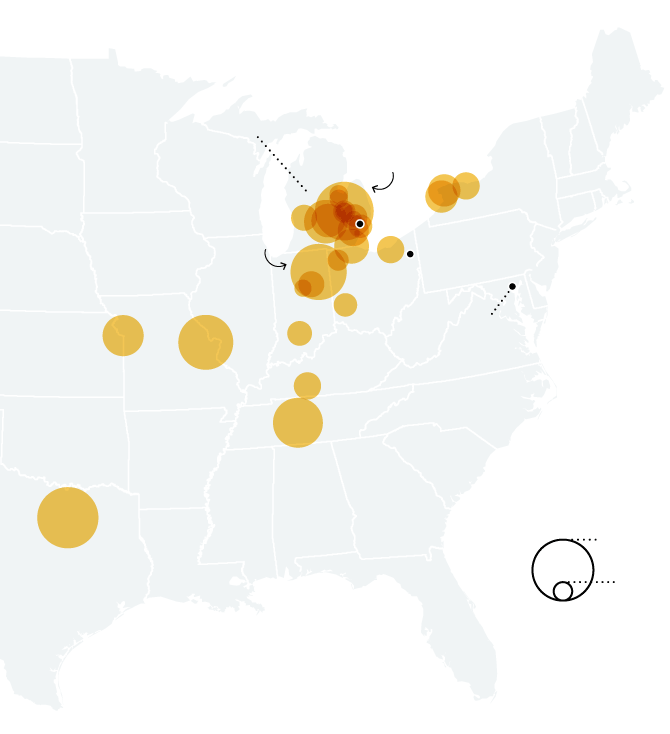 Where G.M. Workers Are on Strike 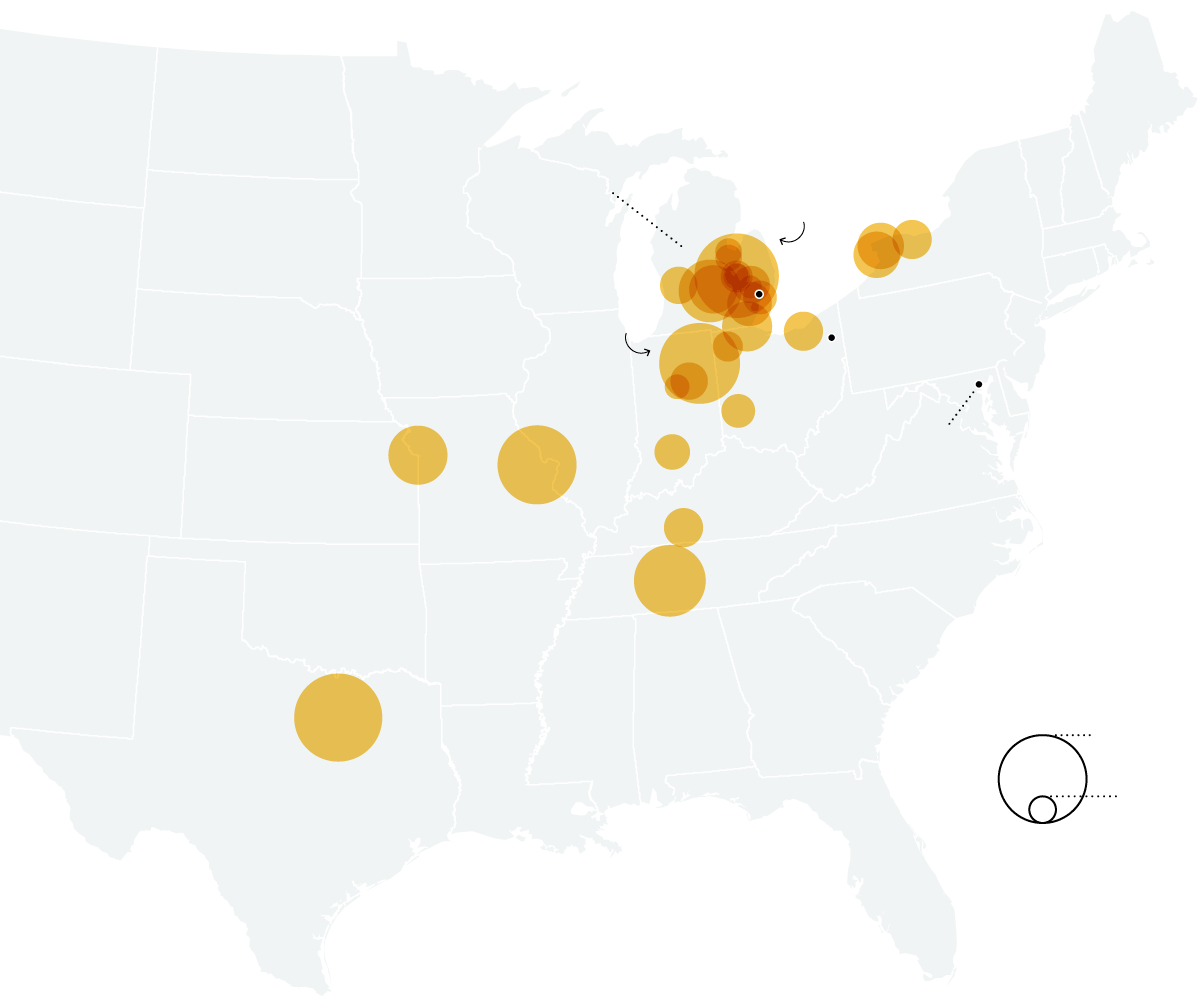 [Watch “The Weekly,” The Times’s new TV show, report on GM and its workers’ fight to survive in Lordstown, Ohio.]

In the first three weeks of the strike, $412 million in wages were lost, according to Patrick Anderson, chief executive of Anderson Economic Group.

“Each week the damage grows geometrically,” Mr. Anderson said. “First you lose your U.A.W. workers, then the immediate suppliers, then the next tiers.”

Michigan has the most exposure to the auto sector, with roughly 8 percent of the state’s economy linked to the industry. Even after factory closings decimated employment in the car industry in recent decades, the state remains dotted with auto plants and suppliers.

Gabriel Ehrlich, director of the University of Michigan’s Research Seminar in Qualitative Economics, estimates that the Michigan economy is growing at an annual rate of 1.4 percent. Without the strike, he said, that number could be 0.1 to 0.2 points higher.

Even before the strike, manufacturing employment in Michigan fell by 1,300 jobs in the first eight months of the year. By comparison, manufacturers added 43,000 jobs nationally in the same period.

“There’s been real damage to the economy,” said Charles Ballard, an economics professor at Michigan State. “It hasn’t been huge yet, but the ripple effects will get bigger the longer this goes on.”

In Flint, at least 1,200 truckers and production workers from suppliers have lost their jobs because of the strike. That includes hundreds from a supplier of seats to G.M., Lear Corporation, according to Duane Ballard, the financial secretary for U.A.W. Local 659, which represents employees at that factory.

A Lear spokesman did not respond to a request for comment.

Many of those workers are new hires who have not worked at the Lear plant long enough to qualify for state unemployment insurance, Mr. Ballard said.

On a rainy night last week, more than two dozen people affected by the strike showed up at the Martus Luna Food Pantry in Flint, said Art Luna, who runs the pantry.

They “are the ones that are really hurting,” he said. “They’re anxious to go back to work.”

The fallout has extended beyond the auto industry, disrupting local businesses that serve autoworkers.

On a typical Saturday night, Luigi’s Restaurant, a short drive from the Lear factory, sees around 350 customers. But in recent weeks, that number has fallen by as many as 60 people, according to Tom Beaubien, who runs the Italian restaurant.

“After one week without pay, everybody starts to suffer, from McDonald’s all the way to Luigi’s Restaurant,” Mr. Beaubien said.

It’s unclear just how many workers have been laid off by G.M.’s suppliers. Magna International, one of the world’s largest auto suppliers, has idled “a few” plants, according to a spokeswoman, Tracy Fuerst.

“We attempted to keep our employees at these impacted plants working as long as possible through training, maintenance and inventory,” she said.

Some G.M. suppliers are finding creative ways to keep workers occupied, whether repairing machines or building an inventory of auto components to ship later.

“Your smarter suppliers are being very careful about how they lay people off,” said Michael Robinet, an expert on the auto industry at IHS Markit. “They don’t want to lose their better employees to a competitor or to another occupation.”

Of course, Michigan’s economy is not as dependent on the auto sector as it was even two decades ago. Lansing has two G.M. plants, but their economic weight is counterbalanced by the state government and the city’s hospital system, said Andy Schor, the city’s mayor. Another large employer, Michigan State University, is nearby.

“The sooner they resolve this the better, but I wouldn’t say everything has shut down in Lansing,” Mr. Schor said. Over all, G.M. and its suppliers account for 6,600 jobs with $250 million in annual wages in the city, which has roughly 118,000 residents.

Mr. Schor said autoworkers had been asking the city-owned utility for more time to pay their electric and water bills.

Yet even at companies that are not highly dependent on G.M., the effect of the strike was immediate. Pridgeon & Clay, a component maker that sells to G.M.’s suppliers, froze hiring right away.

“We heard from our customers within hours,” said R. Kevin Clay, the company’s president. Business had already been a little soft at Pridgeon & Clay, which is based in Grand Rapids, Mich., when the strike began.

G.M. suppliers account for about $13 million of the company’s $300 million in annual revenue. Now parts destined for the automaker are piled up in corners of the company’s distribution center.

Mr. Clay said he was determined to avoid layoffs. “It’s certainly eating into profitability, but rather than cut people, you pinch every penny,” he said.

Other manufacturers, like Stripmatic in Cleveland, say manpower has been tight recently, and the strike has freed workers for other tasks.

But Bill Adler, the company’s president, said business could suffer if G.M.’s plants didn’t resume production soon. “If the strike goes on much longer, what started out as a very good year could turn into a mediocre year,” he said.

“We had a pretty deep shelf when the strike started and are at about average inventory right now,” said Mark Scarpelli, president of Raymond Chevrolet in Antioch, Ill.

G.M. said last week that its American dealers had 760,000 vehicles at the end of September, down 5 percent from a year ago. That’s enough to last several weeks, but dealers are nearing the time when they place orders for the brisk sales they usually see around the end of the year.

Back in Dearborn, Mr. Tlaib of Phoenix Transit & Logistics is doing what he can to get trucks back on the road. He emptied five of his trailers into a warehouse, freeing them to carry parts for other companies. But that has made barely a dent in the G.M. inventory in his yard.

“We don’t know what’s going to happen next,” he said. “We just sit down and smoke and watch the news.”