Lordstown Plant Is Idle, but It Hovers Over G.M. Strike Talks 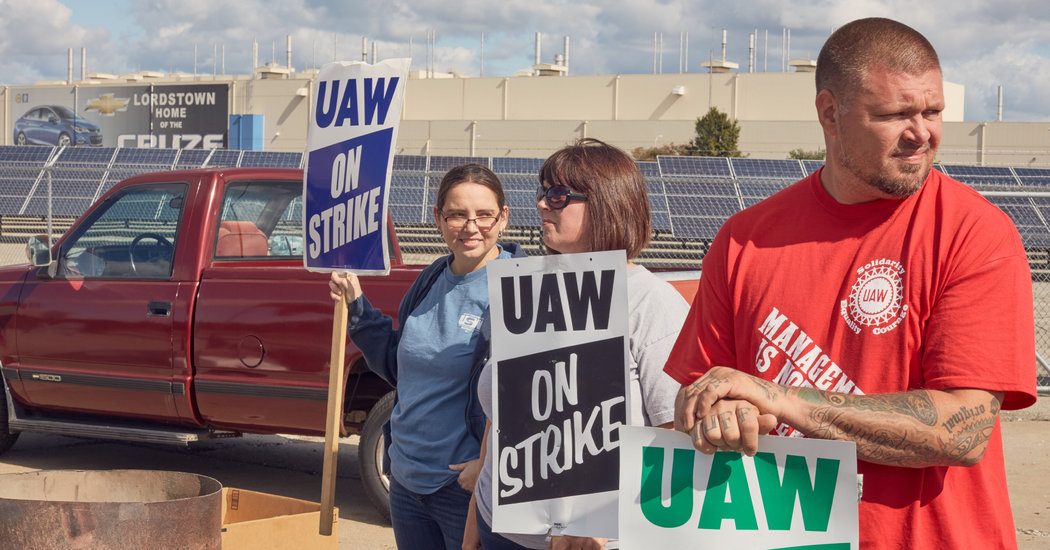 In its negotiations with the striking United Auto Workers union, General Motors has put a seemingly tantalizing offer on the table: It has proposed building a new plant in Ohio to produce batteries for some of the one million electric cars it hopes to sell globally by 2026.

The plant would be near the Lordstown factory where G.M. stopped making cars in March. It would create several hundred jobs in the hard-hit region, and give the union a foothold in the industry’s coming transition to electric vehicles.

But in other ways, the offer illustrates the technological and economic shifts that have left manufacturing workers across the United States worrying that their living standards and their prospects are in decline.

According to people familiar with the outlines of the offer, the plant would probably pay about $17 an hour, well below the $31 an hour that many assembly workers earned in Lordstown. The operation would be under a separate contract. And the work force would be far smaller than the more than 3,000 who once assembled the Chevrolet Cruze there.

“Any new jobs will help the economy here, but it’s not the same jobs,” said Darlene Maddox, 48, a U.A.W. member picketing at the shuttered Lordstown plant on Tuesday. “It’s lower pay. A battery plant is nice, but it’s not going to help all the Lordstown people who’ve been pushed out.”

Technically, G.M. has not closed the Lordstown plant, but has simply not allocated a vehicle to be built there. It says it plans to sell the factory for use by a fledgling maker of electric trucks. Still, its idling has become a point of contention, bringing political pressure on G.M. from President Trump as well as Democratic politicians. And reopening Lordstown has becoming a rallying cry for the union rank and file, fueling militancy that has ended in picket lines.

The strike, the first nationwide walkout against G.M. since 2007, enters its 10th day on Wednesday with the two sides at odds on several issues, the people familiar with the talks said.

In a new contract, G.M. is hoping to limit increases in wages and health care costs. The union wants the company to reopen idled plants, add production in the United States and increase wages for temporary workers and those hired in recent years. Many earn $10 to $14 an hour less than the top rate because of a two-tier structure imposed a decade ago, when the industry was reeling.

The strike’s effect continues to grow. G.M. dealers say they have plenty of cars and trucks in inventory, but analysts estimate that the company is losing tens of millions of dollars a day. Starting this week, the workers will receive $250 a week in strike pay from the U.A.W. The union is also providing assistance with health care costs and insurance premiums, but the lack of regular paychecks may begin to pinch. And with the assembly lines idle, G.M. has laid off several thousand workers at its Canadian plants, whose work is tightly integrated with the American factories.

G.M. has said that its offer before the strike included an investment of $7 billion in United States manufacturing plants, with some of the funds coming from joint-venture partners. It said the investment would create about 2,700 new union jobs and save another 2,700 from elimination.

The Lordstown plant was idled because it was making a small car that few consumers wanted to buy. When operations ceased, it employed about 1,400. G.M. said Tuesday that 1,381 former Lordstown workers had been transferred to other plants making trucks and sport utility vehicles.

Ms. Maddox is one of them. She recently moved to the Lansing, Mich., area with her two children and started work at a G.M. plant making S.U.V.s. Still, it has been difficult because her ex-husband, who also worked at the Lordstown plant, has been transferred to Spring Hill, Tenn.

The proposal to build a battery plant near Lordstown, in Ohio’s Mahoning Valley between Cleveland and Pittsburgh, fits in with G.M.’s plan to introduce 20 battery-powered vehicles by 2023. Most automakers are following suit. Volkswagen, Ford, Toyota, Volvo, Mercedes-Benz and others plan to add dozens of electric models to their car and truck lineups in the coming years, anticipating a gradual transition away from internal-combustion engines.

A shift to batteries from gasoline would slash carbon emissions, but it might also have an effect on the number, quality and location of auto-industry jobs. Electric vehicles require far fewer parts than traditional automobiles, and they can be assembled with fewer workers. According to a report issued by the U.A.W. this year, an internal-combustion engine has more than 100 parts, while the electric motor in a Chevrolet Bolt has three.

Since electric vehicles lack transmissions, require no exhaust or fuel systems and have much simpler motors, a rise in sales of battery-powered models “could have a negative impact on employment levels at plants making these components,” the report said.

Those familiar with the contract talks said, however, that the battery plant proposal remained under consideration. Elements of the plan have been reported by Bloomberg and other news organizations.

The proposal would give the U.A.W. a place in battery production.

The wage of $17 an hour is about the rate paid to workers at Tesla’s giant battery factory in Nevada, which is not unionized. It is also in line with the wages that Nissan, Toyota, BMW and other foreign automakers pay in nonunion plants in Southern states.

Among striking G.M. workers, the prospect of fewer jobs and lower pay is a worry, and union leaders have vowed to fight for a solid future. “We gotta protect those jobs for the next generation,” David Green, president of U.A.W. Local 112 in Lordstown, said in a text message.

Tina Cunningham, another worker walking the Lordstown picket line, said she did not like G.M.’s battery plant idea, but said there might be no better alternative. “A battery plant is unacceptable,” she said. But “if they put in a battery plant with union jobs, I’ll take them.”

VW Executives and Ex-C.E.O. Are Charged With Market Manipulation