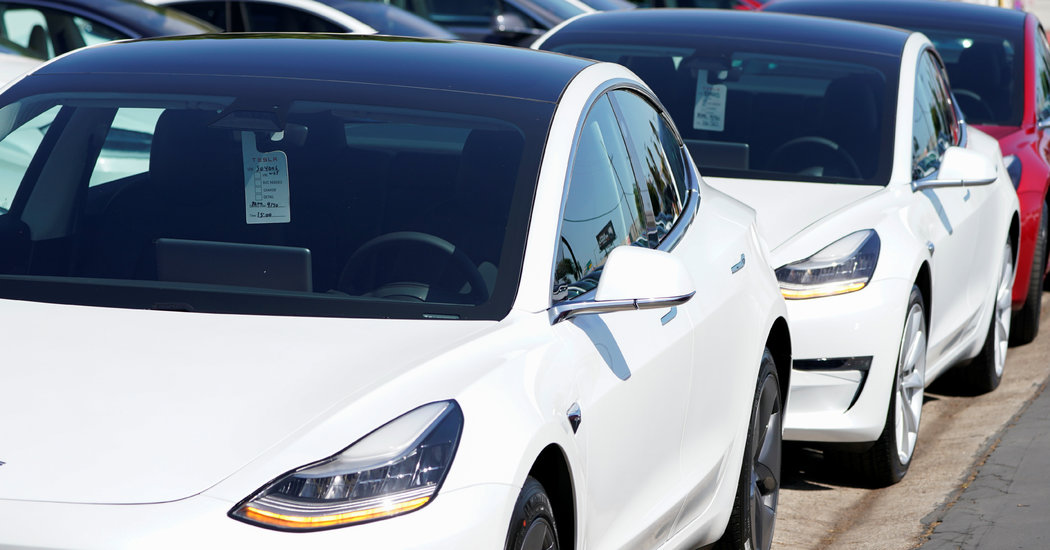 Tesla reported record quarterly deliveries on Wednesday, putting the electric-car maker within reach of its goal for the year. But analysts remain skeptical that the company will show a profit for the period.

The company said it delivered 97,000 new cars in the third quarter, a rise of almost 2 percent from the previous period. Production rose to 96,155 cars, a 10 percent increase. Tesla said that it took in a record number of net orders in the quarter and that it was entering the fourth quarter with a growing backlog.

The sales report was released after the stock market closed. Tesla’s shares lost more than 4 percent on Thursday and are now down almost 40 percent from their 52-week high.

Last week, Tesla’s chief executive, Elon Musk, told employees in an email that the company had “a shot” at delivering more than 100,000 vehicles in the quarter, adding that “demand is strong.”

One challenge in translating demand into profits lies in the figures for individual models.

Tesla said it delivered 79,600 Model 3 sedans in the quarter, an increase of 2.6 percent from the second quarter. But deliveries of its larger, more established offerings — the Model S and the Model X — totaled 17,400, a decline of 250. Analysts say that is a problem for Tesla, since those vehicles often sell for $90,000 and produce far more profit than the Model 3, which sells for as little as $39,000.

Jeffrey Osborne of Cowen & Company said in a recent note to clients that unless Tesla cut costs enough to make money on the least expensive version of the Model 3, “margins are likely to continue to be under pressure and we don’t see sustainable profitability in the near to midterm.” He added that Cowen saw “a lot more that can go wrong than can go right.”

Tesla lost $408 million in the second quarter even as it reported record deliveries and a substantial increase in revenue. Its third-quarter financial report is due in the weeks ahead.

Since introducing the Model S in 2012, Tesla has become one of the top producers of luxury cars in the United States, rivaling more established brands like BMW and Mercedes-Benz. But the company has yet to turn an annual profit since its founding in 2003. And automakers including Porsche, Volvo and Audi are rolling out competing electric cars at a time when Tesla is at least a year away from the next addition to its lineup, the Model Y, a roomier version of the Model 3.

[Read more: A police Tesla nearly ran out of power during a chase. The department isn’t worried.]

Mr. Musk has promised that by next year a million Tesla vehicles will be on the road with the ability to drive themselves and operate as driverless taxis. Other automakers working on self-driving cars say it will take several more years for the technology to be put into widespread use.

Tesla is also spending heavily to build a factory in China, develop an electric pickup truck, improve customer service and expand its network of charging stations.

One handicap that Tesla has faced in the United States this year resulted from its own success. Its cumulative sales reached a threshold at the end of last year that cut the federal tax credit available to buyers by half, to $3,750. That figure was halved again on July 1, and the credit will cease at the end of this year.

There have also been concerns about the capabilities of Tesla’s Autopilot driver-assist system. Last month, the National Transportation Safety Board said Autopilot was at fault when a Tesla vehicle ran into a stopped fire truck in California in 2018. “The system was unable to immediately detect the hazard and accelerated the Tesla toward the stationary truck,” the agency said.

And on Wednesday, federal safety regulators said they were looking at a new Tesla feature called Smart Summon, which is supposed to enable a vehicle to navigate from a spot in a parking lot to a waiting driver. “Your parked car will come find you,” the company website says of the technology.

But since Tesla began adding the feature to some cars in recent days through a software update, videos have appeared in social media showing crashes or near accidents while Smart Summon was in use.

In a statement, the National Highway Traffic Safety Administration said it was aware of reports about Smart Summon and was “in ongoing contact with the company and we continue to gather information.” The agency’s action was reported Wednesday afternoon by Bloomberg.

A Police Tesla Nearly Ran Out of Power During a Chase. It Wasn’t the Car’s Fault.