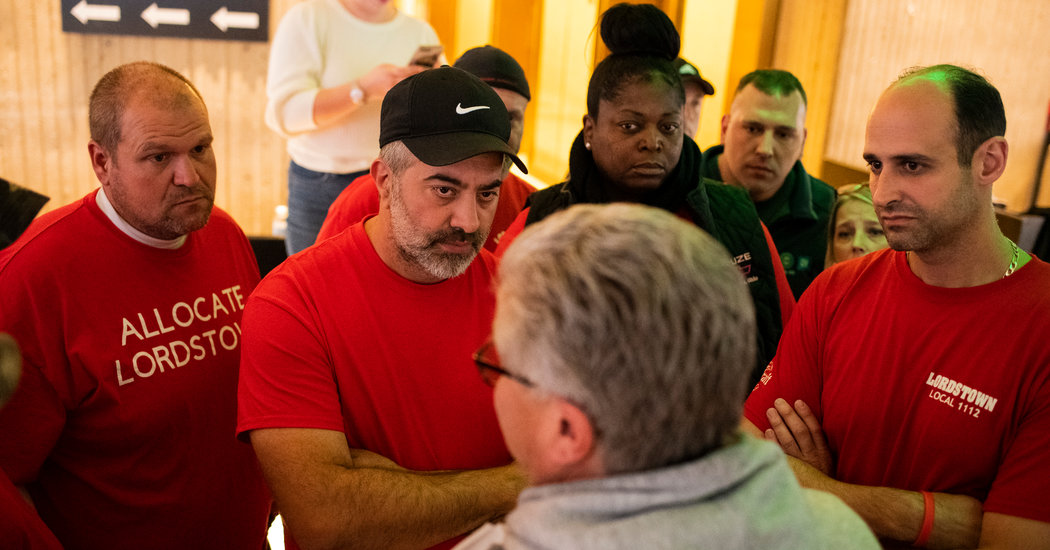 DETROIT — The longest strike against General Motors in half a century isn’t over yet.

Leaders of union locals voted Thursday to approve a tentative contract agreement with the automaker, but said the strike — already a month old — would continue until workers voted to ratify the deal.

After meeting for more than five hours in Detroit, the group said voting by the 49,000 members of the United Automobile Workers at G.M. plants would begin on Saturday and be completed within a week.

The union leadership did not comment after the meeting, which brought together nearly 200 U.A.W. representatives, and it was not clear whether there had been dissension in the room. But it will now be up to those representatives to sell the agreement to members.

According to a summary posted online by the union, the four-year deal includes wage increases, and a formula for allowing temporary workers to become full-time employees. It also provides for workers to reach the same top wage regardless of when they were hired, overhauling a dual-scale system that has produced wide pay disparities.

But the union appeared to fall short of its objectives for reopening plants and bringing jobs back to the United States from Mexico.

The tentative agreement would keep production going at the Detroit-Hamtramck plant, a factory for Chevrolets and Cadillacs that G.M. had said it would close. But the deal does not reverse plans for three plants that have been idled, including one in Lordstown, Ohio, though it provides retirement incentives for displaced workers.

Brian Rothenberg, the union’s spokesman, said after Thursday’s meeting that the U.A.W.’s negotiating team “did everything they could” to save jobs.

“This was a strike not just by U.A.W. workers,” he said. “It became a strike for American workers and the middle class.” Workers walked off the job, he added, to secure fair wages and “a fair share of the profits.”

The company’s profits — and its implicit ability to share more of them with workers — were a continuing refrain for the union in the long negotiations with G.M., which started in July. In the last three years, the automaker has reported earnings of $35 billion in North America.

The contract negotiations grew tense at times. The union accused G.M. of not negotiating fairly and assailed the company for seeking to cut off workers’ health insurance during the strike, a move it ultimately did not make.

When the talks appeared to be at a stalemate last week, the chief executive, Mary T. Barra, met with the union’s top negotiators to get discussions back on track.

Remaining on strike is likely to be seen as a move by the union leadership to take a hard line with the company, a position that could rally support among the rank and file. In the last contract negotiations, in 2015, some workers complained that the union didn’t fight hard enough and gave in to too many management demands.

In announcing the accord on Wednesday, the U.A.W. said it had “achieved major wins.” But ratification is not a foregone conclusion. In the union’s last negotiations with G.M., in 2015, approval of a tentative agreement was delayed for a month and the terms had to be reworked.

A rejection of the proposed contract would be a rebuke to the U.A.W. president, Gary Jones, and his negotiating team.

“If the rank and file vote down an agreement their leaders send them, they also are voting down the leaders,” said Erik Gordon, a business professor at the University of Michigan who follows the auto industry. “Workers may ask whether it was worth being out of work a month to get a deal that could be close to what they would have gotten with no strike and no loss of pay.”

G.M. issued a statement urging the union “to move as quickly as possible through the ratification process, so we can resume operations.”

But for at least another week, the walkout will continue to take a financial toll on the company, its workers and its suppliers. Analysts estimate that the strike has cost G.M. $2 billion in operating profit. Workers are getting by on strike pay of $275 a week.

If the contract is ratified, each full-fledged U.A.W. worker will receive a signing bonus of $11,000, a 3 percent wage increase in the second and fourth years of the contract, and a 4 percent lump sum in the first and third years. Temporary workers would get a signing bonus of $4,500, the same wage increases as full-time workers and the possibility of becoming permanent employees within three years.

A notable provision would allow workers hired since 2007 to reach a top wage of $32 an hour after four years of service, the same maximum as more senior workers. The change would essentially eliminate the two-tier wage system, which the union says is a source of workplace tension.

Since 2007, new hires have started at about $17 an hour and moved to a top wage of $29 over eight years. Workers hired before 2007 earned the top wage of $31 an hour. That left some workers earning far less than more senior colleagues doing similar work.

The two-tier system was introduced when G.M., Ford Motor and Chrysler were struggling and needed to lower labor costs to compete with the nonunion, foreign-owned auto plants that had sprung up across Southern states.

The tentative G.M. deal would also eliminate a $12,000 cap on annual profit-sharing payouts, which could have a significant upside if G.M. continues its recent earnings performance.

Health care benefits are unchanged, with workers paying about 3 percent of the cost.

There were signs of dissent Thursday from union members outside the Renaissance Center office complex, where G.M. has its headquarters and where the union meeting took place. As the union officials arrived, they were greeted by about 30 workers from the Lordstown plant in red T-shirts shouting, “Vote no!”

“It’s no deal for us,” said one of the protesters, Todd Piroch, a Lordstown worker who has been transferred to a plant in Bowling Green, Ky., that assembles Chevrolet’s Corvette sports car. He said he was going to vote against the contract, but said he wasn’t sure workers elsewhere would do so.

G.M. has promised to invest $7.7 billion in its manufacturing operations in the United States over the next four years, and a further $1.3 billion in ventures with partners, saying those moves would create or preserve 9,000 jobs. But the deal includes no specific promises to expand domestic production or to move manufacturing to the United States from Mexico, both of which were goals of the union going into the negotiations.

Mr. Rothenberg, the union spokesman, said the U.A.W. would make the details of G.M.’s investment plans public soon. In previous years, the union has presented a breakdown of plant-by-plant investments.

One of the union’s main objectives was getting G.M. to reopen the car factory in Lordstown, a goal that President Trump endorsed. But there is no indication that the matter was ever on the table in the contract talks. G.M. stopped production at that plant, and others in Baltimore and in Warren, Mich., as part of a cost-cutting effort that eliminated 2,800 factory jobs and thousands of white-collar positions.

In a statement on Thursday, General Motors said it was looking into building a battery factory near Lordstown that would employ about 1,000 workers. The plant would be built with a partner and unionized, but under a separate contract.

An electric-truck company that hopes to buy the Lordstown plant from G.M. would employ about 400 production workers, the automaker said.

The company has not indicated that displaced workers from its Lordstown plant would be given preference in hiring at either operation.

G.M. reaffirmed a plan announced in May to invest $700 million in three existing plants in Ohio — in Parma, Toledo and the Dayton area — with an expected net gain of 450 jobs.

“G.M. is committed to future investment and job growth in Ohio,” the company said.

If the G.M. contract is ratified, the U.A.W. will turn its focus to Ford Motor or Fiat Chrysler. Contracts with those manufacturers expired on Sept. 14, but workers continued reporting to assembly lines while the union negotiated with G.M.

Digilocker not enough if you encounter these situations!

When a Ferrari’s in a Fender-Bender