¨If he doesn´t also pull down the audio in 2 days, I will do it myself!¨ Magix Enga issues another ultimatum to Harmonize

Despite pulling down his ¨Uno¨ video on You Tube, Magix Enga demands that Harmonize does the same for the song´s audio in 2 days lest he faces the consequences.

According to the Kenyan producer, he doesn´t understand why he can still see the song´s audio up on You Tube.

So his demands are that the bongo star either pulls down the audio too or pleads for forgiveness otherwise Magiz Enga will pull it down himself, in a span of 2 days.

Harmonize´s ¨Uno¨ audio still up on You tube

Harmonize failed to communicate back even after I sent him a warning. So one week was over and You Tube deleted the song ¨Uno¨. Tanzanians were asking how I was able to pull down the video from You Tube, but I did and it is no longer on You Tube. If he is not careful, I will also pull down the audio. I have seen it is still available on You Tube, I had not even checked.

Mzazi Tuva went ahead to ask whether he also has the capacity to pull down the audio and this was Magix Enga´s response:

Yes, I can also pull it down. I can give him [Harmonize] 2 days to figure it out otherwise I will pull it down and let him start from scratch. 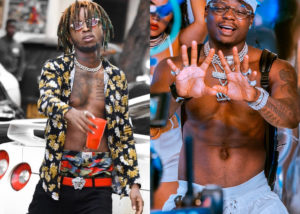 Wahu caught on the wrong side of the Law, now facing legal charges