The mother of 5 appealed to fans online, to save Maureen´s life through blood donation.

Her campaigns finally bore fruit and fans turned up to donate blood to save the life of Lady Maureen.

Akothee pleaded with fans to be sensitive to the singer´s predicament by standing-up, mobilizing and giving hope.

The Ohangla star´s condition worried the madam boss admitting that Maureen was in bad shape and critically needed several pints of blood. 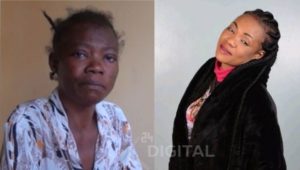 Akothee even offered transport to those willing to donate blood and she was not disappointed.

In return, the President of Single mothers penned:

Thank you so much, we got donors from Migori and Kissi, now the story has changed. The hospital has said, time has elapsed and no one is in the laboratory to conduct the donation process. doctors have left for the weekend and will be back on Monday.

Upcoming artists are very idisciplined ,ungrateful, and tiring, they will like to use your name to elevate themselves, They come to you on their knees with crocodile tears 😭😭😭 when no one knows them, they cry and beg, even kneeling down on their knees 🙏🏾🙏🏾🙏🏾, claiming they love you soo much ,and respect you alot 🤷‍♂️once you get into the pity box, support them, 🙆‍♂️🙆‍♂️ Once their music play ,just once on a tv channel, then blogs talk about it, THEY HAVE MADE IT IN LIFE 🏃‍♂️🏃‍♂️🏃‍♂️ Once they cant meet the standards they expected in afew months ,you become an enemy 🙄they run to the blogs thinking they can eat fame! My friend FAME WITH NO BRAINS ,CONTENT OR LUCK is like Havin 1 million acres of bare land Now the problem is, you are famous and broke 🤷‍♂️ with enemies isntt this too much I have invested heavily in music over years Only upto last year I started making money from music with over over 20 songs both video and audio, sasa wewe mwenye uko na video sijui mbili with 200 followers , sijui miracle itatoka wapi , tulieni jamani 🙏🏾🙏🏾🙏🏾, be patient please , success is a marathon not 100 meters race

The mother of 5 further transferred Lady Maureen to a different facility in Kisumu. Further appealing to Kenyans to help contribute in order to support the ailing singer´s expenses.

Previously, word doing the rounds had it that Lady Maureen had passed on, forcing her to rubbish the claims and confirm that she is still alive.

I am not dead. I was rushed her by my family when my condition worsened, but I am currently being transfused with blood. It has never been clear what I am suffering from but the condition has worsened in recent days.

It has been three years since Maureen´s health condition saw her in and out of hospital several times as doctors reveal they are not able to tell what is ailing her. 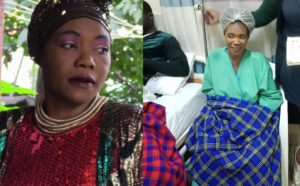 A condition that sees her need close to three litres of blood daily.

The turn of events have affected Akothee who has tried putting herself in the shoes of Lady Maureen´s mother who is running all over in search of her daughter´s cure.

Watch as Akothee breaks down to tears: