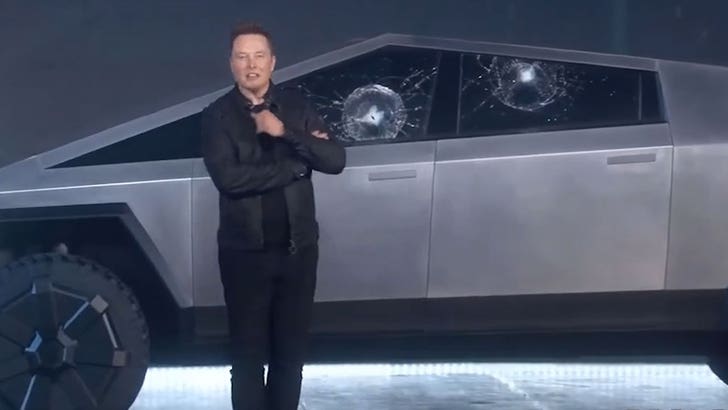 Elon Musk has a smashing success on his hands, and we mean that in the worst way possible, because his new Tesla Cybertruck — billed as shatterproof — shattered moments after he unveiled it.

We’ll say this … if Elon isn’t firing a handful of people right now, he’s going soft. On Thursday at SpaceX HQ in Hawthorne, CA … he pulled back the curtain on the Cybertruck, and had a staffer throw a metal ball at the driver side windows to prove the near-indestructibility of its “armor glass.”

It couldn’t have gone worse as both windows shattered. Elon seemed to vamp to find a silver lining, saying … “It didn’t go through. That’s a plus side.”

It was reminiscent of some of SpaceX’s early Falcon 9 rocket disasters. ‘Memba this one? Juuuuust a bit outside of the landing pad, and into the drink!

To be fair, the Falcon 9 works like a charm now, so maybe that bodes well for the Cybertruck’s future, but calling its introduction an embarrassment is an enormous understatement.

In fact, it went sooooo badly, it smells of a setup. The question — was Elon in on it, just to make sure the new Cybertruck unveiling went viral? OR, was Elon set up by prankster employees?

If it’s the latter, like we said … someone’s looking into unemployment benefits right now.