How Surreal! How Radical! How Avant-Garde! How Broadway? 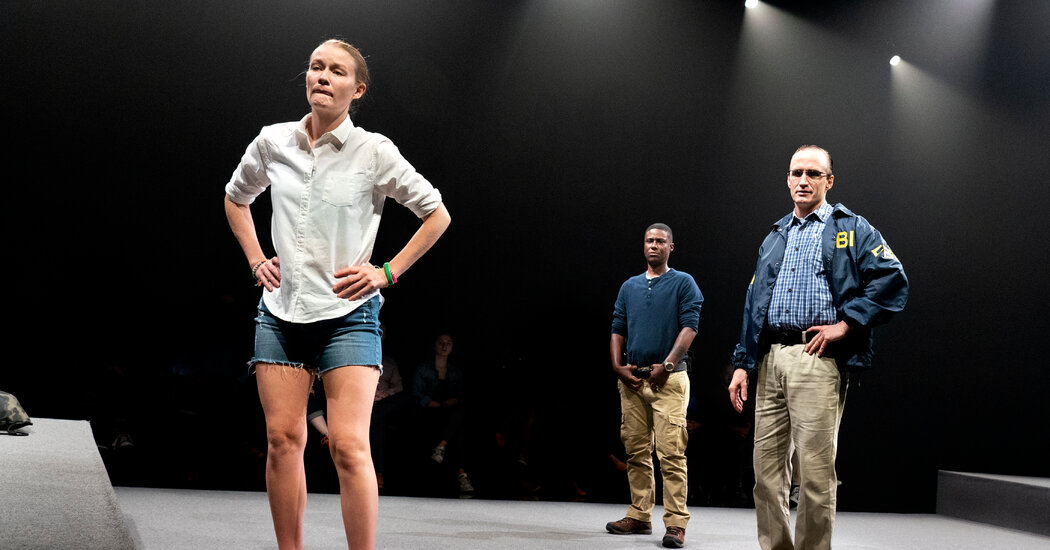 Among the 21 returning and 19 new productions scheduled to begin performances on Broadway before the end of the year, the seven plays written by Black playwrights have received the most attention. And rightly so: It’s long past time that the commercial theater paid more than lip service to representation and inclusion.

But another change is also happening on Broadway, this one about genre and provenance instead of authorship and inclusion. An unusually large proportion of the 10 plays opening this fall are what one producer calls “formally inventive” and what others might label downtown, avant-garde, experimental or (that dread word) challenging.

Three of the most prominent — “Is This a Room,” “Dana H.” and “Pass Over” — come from Off Broadway and Off Off Broadway theaters. That is not in itself so odd; the noncommercial world has fed the commercial one for years. But even allowing for their origins, the current crop includes some very daring plays: surely (along with “Slave Play” in 2019) among the most daring in recent memory to make the leap.

Or rather, the leaps, because each had several gulfs to cross. It was already unexpected when “Is This a Room,” conceived and directed by Tina Satter for her company Half Straddle, transferred in 2019 to the Vineyard Theater Off Broadway after its premiere at the Kitchen. Even at that Off Off Broadway experimental performance space, its format was novel, consisting entirely of verbatim enactments of edited transcripts of the F.B.I. interrogation of Reality Winner, a linguist and CrossFit competitor accused (and later convicted) of leaking classified government reports. Between you and the story the play carefully erects two layers of abstraction, on the theory that a play’s emotions, when forced to work so hard to be heard, will in the process be amplified.

A similar technique informs another surprise transfer from the Vineyard: Lucas Hnath’s “Dana H.,” directed by Les Waters. In Hnath’s script, recorded interviews he commissioned between his mother, the Dana Higginbotham of the title, and Steve Cosson, the artistic director of the theater group the Civilians, are lip-synced live. Again, a terrifying, true story — in this case about Higginbotham’s abduction by a violent psychopath — is refracted through several lenses.

Though “Is This a Room” is about governmental overreach and “Dana H.” is about the charisma of sociopathy, they are both psychological thrillers with tiny casts, one set and no stars. (The leading roles in each, however, are played by revered downtown figures: Emily Davis as Reality Winner; Deirdre O’Connell as Dana H.) Perhaps that’s why it makes sense that they are coming to Broadway together; in a rare arrangement, they will play a rotating schedule at the same theater, the Lyceum. (“Is This a Room” begins previews on Sept. 24; “Dana H.” on Oct. 1.)

Whether they should be coming to Broadway at all is a different matter. From an aesthetic perspective, I’m glad they are: The hub of the country’s commercial theater has for too long failed to reflect the profound experiments going on elsewhere.

But Broadway is not run as an experiment; it’s run as a business. And from that perspective plays like “Is This a Room” and “Dana H.” may not “belong” on Broadway as conventionally conceived, which is to say they seem too strange, too subtle and too noncommercial to draw crowds and make money. Especially as the theater moves into an uncertain phase in its response to the pandemic, when no one is sure whether the returning war horses will succeed, how can even a gem of the avant-garde expect to do so?

And then there’s this worry: If the plays fail financially, for reasons that may have little to do with their inherent appeal, might that become an excuse for the Broadway gatekeepers to slam the door on similar works in the future?

One person who doesn’t buy that argument is Matt Ross, a lead producer of “Is This a Room” and “Dana H.” It was he who pushed to move the two plays to Broadway and who came up with the notion of pairing them. When I asked how long he’d dreamed of producing risky noncommercial shows on Broadway, he laughed but then pointed out that another show for which he was a lead producer, “What the Constitution Means to Me,” earned back its investment of $2.5 million, and nearly 60 percent beyond that, after it transferred to Broadway in 2019. Its national tour, interrupted by the coronavirus, will resume this month in Minneapolis.

“I don’t think there’s an increased appetite for these plays,” Ross said. “What I think has increased is our acknowledgment of an appetite that has long existed. Look at television. There are a lot of very successful shows you would define as formally inventive, that jump around in chronology or mess with point of view. Independent film is now a dominant form of film as well. Why couldn’t these plays be a dominant form of Broadway?”

Certainly, the pandemic has opened a door. Not coincidentally, Ross is the lead producer of “Pass Over,” Antoinette Chinonye Nwandu’s play about young Black men resisting the dehumanization of police violence. A hit in Danya Taymor’s production at Lincoln Center Theater’s small LCT3 space in 2018, it’s another work that could seem too “special” for Broadway — not because of its themes but its surrealistic style. Yet for the incarnation at the August Wilson Theater, capitalized at $2.5 million, Nwandu has doubled down on its difference instead of papering it over.

That the August Wilson had an opening in its schedule at just the right moment would seem to be part of what made the transfer possible, yet Ross said there were no special accommodations from Jujamcyn, the theater’s owner, other than wanting to book such a challenging show in the first place. “We were definitely not the only horse in the race” to get a slot there, he said, or at the Shuberts’ Lyceum.

What the pandemic has done, though, is interrupt the usual model. “It’s hard to make changes when things are going well,” Ross said. “But when the impossible happens, it frees us up to think about things in a new way. We don’t have to cater to tourists right now, for instance, which is healthy” — the local audience presumably being more adventurous.

“When you can no longer point to ‘this is what works, this won’t’ — which was probably false to begin with because wouldn’t all shows be hits if that were the case? — that’s when you can do things differently,” Ross added. “Maybe it means we’ll find better ways.”

Pokémon Oreos Would Be Cooler If Nabisco Workers Weren’t Striking

The Podcasts Opera Pros Tune To