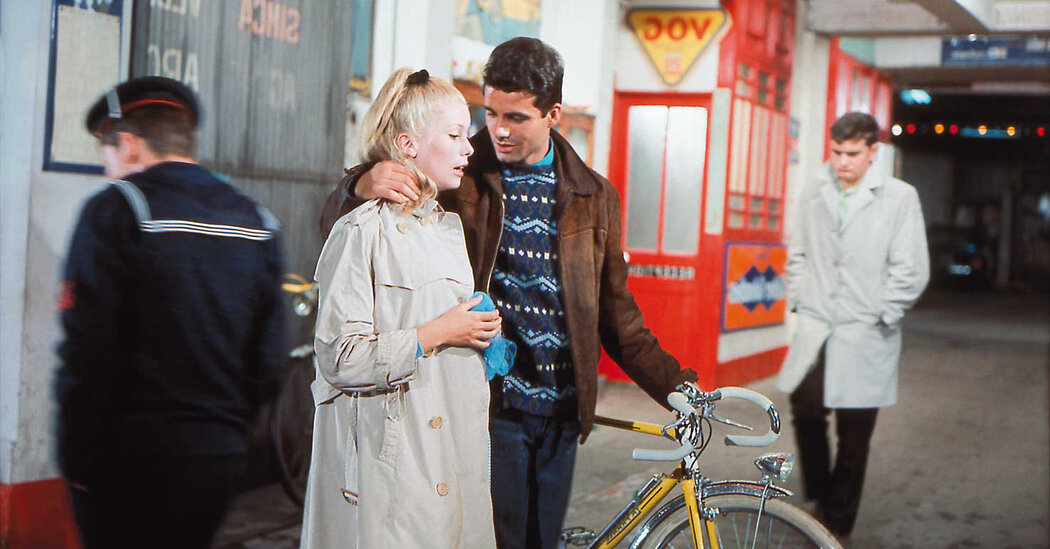 Nino Castelnuovo, a popular Italian film and television actor who found success beyond his home country when he starred alongside Catherine Deneuve in the soaringly sentimental French New Wave musical “The Umbrellas of Cherbourg,” died on Sep. 6 in Rome. He was 84.

His death, in a hospital, was confirmed by his representative, Simone Oppi.

Mr. Castelnuovo, who brought an incandescent charm to the screen, became a star during a golden age of Italian cinema. He collaborated with leading directors like Luchino Visconti and Vittorio De Sica and acted alongside greats like Alberto Sordi and Claudia Cardinale.

If he achieved international notice with “Umbrellas,” he did not truly attain fame in Italy until 1967, for his role as Renzo in a television series based on Alessandro Manzoni’s 1827 literary epic, “The Betrothed,” which takes place during a plague in the 17th century. Such was that show’s popularity, Mr. Castelnuovo once said, that Pope Paul VI became a fan and requested to meet him. (“Castelnuovo, I wish you to be as good, wise and respectable as your Renzo,” he recalled the pope telling him — to which he said he replied, “Likewise.”)

Mr. Castelnuovo became a fixture in Italian living rooms in the 1980s as the athletic middle-aged spokesman for Olio Cuore, a brand of corn oil. In television commercials for the product, he vaulted over a fence to display his good health.

“He’s one of the excellent underrated Italian actors,” Antonio Monda, who teaches a course on Italian cinema at New York University and is the artistic director of the Rome Film Festival, said in a phone interview. “He was praised abroad, especially in France, but was somewhat overlooked in Italy. His curse was doing that infamous oil commercial.”

Mr. Castelnuovo secured his place in the international film canon for his performance in “The Umbrellas of Cherbourg,” Jacques Demy’s 1964 New Wave romance in which all the dialogue was sung, almost as though it were a cinematic opera. (Michel Legrand wrote the music; Mr. Castelnuovo’s voice was dubbed.) The movie was awarded the Palme d’Or at the Cannes Film Festival and received five Academy Award nominations, including one for best foreign-language film and one for the song “I Will Wait for You.”

“The Umbrellas of Cherbourg,” set in a Normandy port town, recounts the youthful love affair between a garage mechanic named Guy, played by Mr. Castelnuovo, and Geneviève, the daughter of an umbrella shop owner, played by Ms. Deneuve. Their romance ends when Guy is drafted into the Algerian war. Geneviève soon discovers she is pregnant with Guy’s child. When they finally meet again, they have married other people, and their love is a bittersweet memory.

Revisiting the film in 2011, The New York Times critic A.O. Scott called it “one of the most romantic films ever made.” “The romance between these young lovers was not meant to be,” he added, “but our romance with this incomparable film will last forever.”

Francesco Castelnuovo was born on Oct. 28, 1936, in Lecco, Italy. His father, Camillo, worked in a button factory. His mother, Emilia Paola (Sala) Castelnuovo, was a maid.

Growing up, Francesco held jobs as a mechanic and a house painter to support himself. He often found refuge in the darkness of movie theaters and idolized Fred Astaire, whose films inspired him to become a gymnast and a dancer in his teens.

In 1955, he moved to Milan to study at the Piccolo Teatro repertory theater. He also found work as a mime on a children’s television show about a magician named Zurli. He made his film debut in 1959 with a small part in Pietro Germi’s crime thriller “The Facts of Murder,” and he appeared the next year in Visconti’s acclaimed “Rocco and His Brothers.”

Among Mr. Castelnuovo’s other films were “The Hunchback of Rome” (1960), which was notable for featuring the director Pier Paolo Pasolini in an acting role, and De Sica’s 1966 drama, “A New World.” He appeared in Jean-Luc Godard’s segment of “Amore e Rabbia” (1969), a series of short stories directed by various cinema luminaries. He reunited with Deneuve in Agnès Varda’s film “The Creatures” in 1966.

He is survived by his wife, Maria Cristina Di Nicola; his son, Lorenzo; and his sister, Marinella.

In 1996, at the age of 60, Mr. Castelnuovo played the archaeologist D’Agostino in Anthony Minghella’s “The English Patient.” He continued acting into his 70s, performing in productions of works by the Venetian playwright Carlo Goldoni and playing a judge on the television series “Tuscan Passion” from 2013 to 2015. He also worked to raise awareness of glaucoma, from which he had long suffered.

In interviews, Mr. Castelnuovo often reflected on the glorious era of Italian cinema that he had witnessed firsthand. He sometimes complained that Italian films had become less, well, Italian.

“I come from a cinema that is very different from now,” he said in a Roman television interview in 1999. “It was a time when Italian film was the most respected cinema in the world.”

“We’ve decided to follow the Americans and other big nations,” he continued. “We’ve lost sight of just how much talent we Italians have.

“We’re a country of marvelous people. Marvelous in the sense that, without our imaginations, we cannot live. We’re not very good realists, which makes us very imaginative people.”