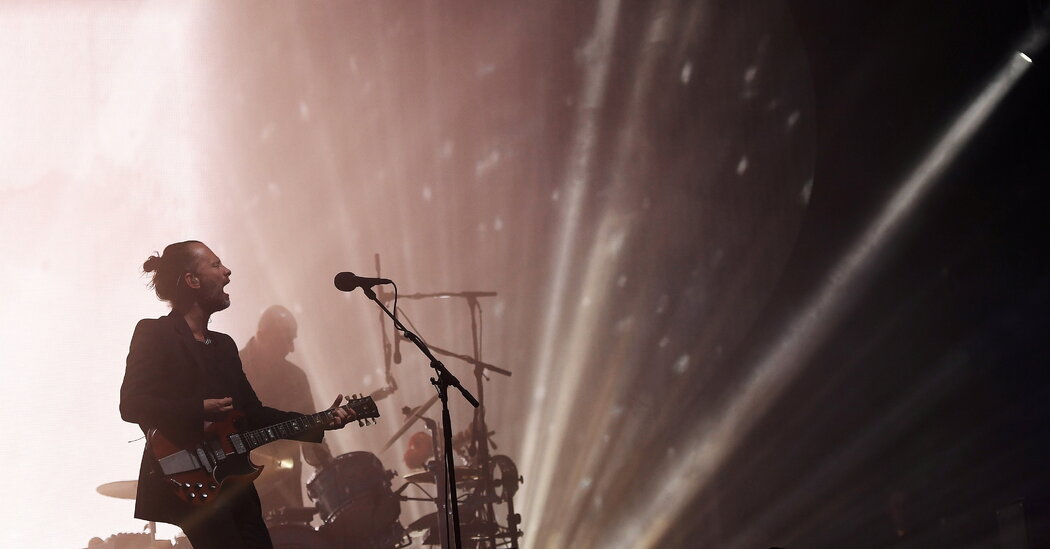 In 2000, Radiohead ripped apart old, pompous Britpop assumptions. With the sessions that yielded the albums “Kid A” and “Amnesiac,” the band followed its most arty, experimental inclinations and looked inward at the same time. “If You Say the Word” is a song that the group completed but shelved, which will appear on its expanded reissue “Kid A Mnesia.” Its sound is still relatively live — a band with a steady drummer going minimalist — with lyrics that contemplate entombment and liberation. JON PARELES

The producer Max Martin may have coined the phrase “melodic math,” but Ed Sheeran absolutely embodies it in his lyrics, music and production. “Shivers” is just packed with pop trigger words — love, heart, fire, kissed, party, car, dance, sunlight, soul, “tear me apart,” “lipstick on my guitar,” “all day and all night,” “do it like that” — backed by a track that pulls in pizzicato strings and flamenco handclaps over a solid four-chord structure. If computers will dance or fall in love, this is their song. PARELES

A balmy track about the one who got away, “23” is about how the power of memory is sometimes more than enough. Sung with wistfulness but no malice, Sam Hunt recalls a love who moved on in a different direction, and he sounds almost as soothing remembering their good times together as imagining how her future might have turned out: “I really hope you’re happy now/I’m really glad I knew you when.” JON CARAMANICA

The solo debut single from Lisa of Blackpink is politely exuberant and tautly bubbly. Perhaps her group’s most nimble rapper, she sashays her way through this thumping, popping song. It’s an extension of a familiar brand, with a sprinkle of innovation when the track and video nod to Lisa’s Thai heritage. CARAMANICA

Jazzmeia Horn and Her Noble Force, ‘Where Is Freedom!?’

The vocalist and composer Jazzmeia Horn closes her new album, the rousing big-band effort “Dear Love,” with “Where Is Freedom!?,” carrying a message of self-liberation over a groove that could have come off a 1970s soul record. “What does it mean to ascend after your journey begins?/You just might lose all your friends to be free,” she sings defiantly, as the track nears its summit and the horns’ harmonies pool together behind her. GIOVANNI RUSSONELLO

How does a band built for brash, high-gloss, defiant pop address pandemic times? Brashly and knowingly, summoning its usual muscle and melody — Derek Miller’s walloping drum-machine beats and loud guitars behind Alexis Krauss’s chipper voice — but now, on its new album “Texis,” with lyrics that stare down dread and mortality: “Strip away armor, strip away fear/I think I lost it but here it comes again,” Krauss sings. “I’ll find my way out of the grave.” PARELES

The genre-crushing group Ìfé is a revelation. Its new song, “Fake Blood,” is a reminder of the boundless promise of music, collaging Auto-Tuned Yoruba prayer, the steady shakes of a maraca and thumping bass into a meditation on colonialism, police violence and mass shootings. Over clattering hand percussion, deep bass and razor-sharp synth stabs, the group asks, “¿Qué es lo que pasa aquí?” (“What’s going on here?”) Drawing on sounds and styles from across the African diaspora, it is an exercise in divination — a demand to imagine a better future, right here, right now. ISABELIA HERRERA

The early waves of Brooklyn drill were light on storytelling, so Fivio Foreign’s breakout performance on Kanye West’s “Donda” album came as a shock. “Story Time” underscores that his narrative gifts are here to stay. It’s a vivid tale about a young man in jail facing unthinkable choices: “He was a little fish when he jumped into the water/and then he grew into a shark.” CARAMANICA

Like the neon glow of a below-ground cocktail lounge, Tirzah’s “Hive Mind” flickers into cool tranquillity. A kick drum thumps under oblique, dog-bark synths. Tirzah and the vocalist Coy Sey offer a serene, call-and-response conversation: “But who we were/Do we see things through?” By the song’s end, the question is seemingly left unanswered. The effect is a bit haunting and a bit loose, and all the more hypnotic. HERRERA

Saint Etienne, which arrived in the 1990s as a suave, optimistic, crate-digging corollary of trip-hop, is downright somber on its album “I’ve Been Trying to Tell You,” billed as music for the film of the same name. “Pond House” meditates in a wide-open soundscape, with a vocal sample from Natalie Imbruglia’s “Beauty on the Fire” — “Here it comes again/Cannot outrun my desire” — hovering above a thudding reggae beat and bass line, as percussion and sea gull sounds open out the horizon. PARELES

Visiting Kolkata, India, years ago, the saxophonist Aakash Mittal became inspired by the throbbing energy and lively soundscape of night in that crowded city, and endeavored to write music that captured the feeling. He ended up living there for the better part of two years, and came away with a book of compositions that he referred to as his “nocturnes.” On “Nocturne III,” he was specifically thinking of the way drivers use their car horns — freely, as a form of chattery communication — while drawing from the Carnatic raga of Bageshri. Mittal and his trio (the guitarist Miles Okazaki and the mrudangam drummer Rajna Swaminathan) play in unison, repeating an increasingly urgent rhythm at one pitch before jumping to another, like different cars stuck in a jam. RUSSONELLO

Haley Fohr, the composer and singer who records as Circuit des Yeux, brings operatic drama to a sense of loss in “Sculpting the Exodus” from her album due Oct. 22, “-io.” It’s an elegy that begins with a modest, tolling harpsichord motif and swells to an overwhelming orchestral peak in a swirl of ghostly voices, as Fohr clings to a kind of memorial, singing, “The signal goes on repeating.” PARELES

“Abeyant,” a new work from the experimental luminary Sarah Davachi, is deeply reverent of time. The song is simple but potent: For seven minutes, the fuzz of tape hovers under subdued piano keys and synths, repeating, suspending and lulling melody into a kind of extended, decomposed aria. This is the kind of music that demands repeat listens, urging us to listen closely, deeply and intimately to what might appear to be just texture, but contains the promise of deep contemplation under the surface. HERRERA

He Taught Ancient Texts at Oxford. Now He Is Accused of Stealing Some.