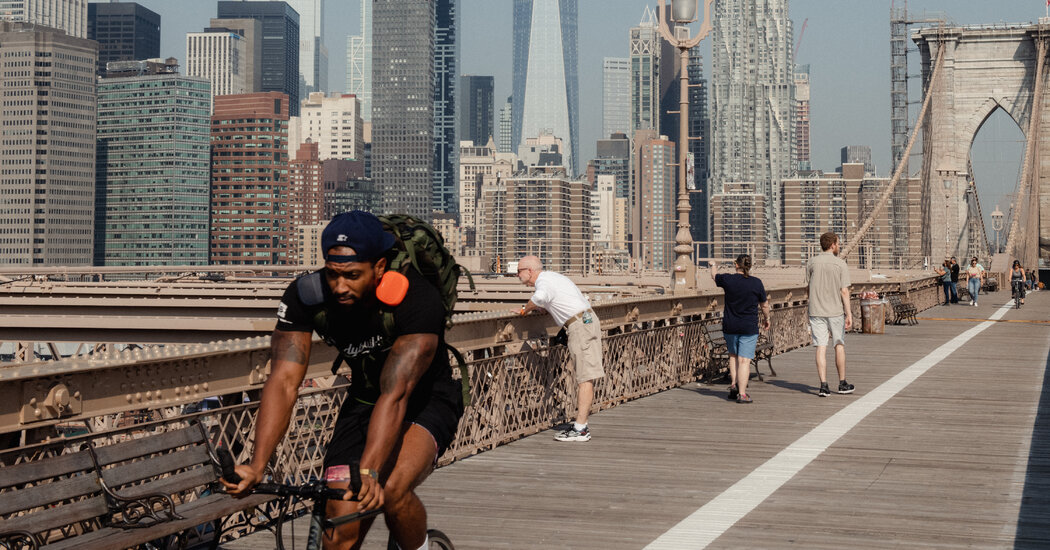 The architects Michael Manfredi and Marion Weiss took to walking across the Brooklyn Bridge. Others started bicycling. For a while, a small flotilla, Dunkirk-like, ferried neighbors across the East River, colonizing the waterways as a sixth borough.

After Sept. 11, New Yorkers did what they do — coped, improvised, found one another in public spaces, reimagined the city. Two decades on, Lower Manhattan, still a work in progress, is mostly better than it was. The outcome seemed unlikely for a time. The reconstruction at ground zero was a mess and remains a massive, missed opportunity.

But it may well be the mess, not the memorial or the office towers — half conceived to reignite the economy, half as middle fingers raised to Osama bin Laden — that has ended up being the ultimate retort to Sept. 11 and the emblem of New York’s resilience.

City-building in a fractious democracy is a slow, lurching, multipronged process, after all. The southern tip of what the Lenape called Mannahatta has been contested territory and a civic petri dish since the September morning in 1609 when a community of Lenape watched a Dutch ship, carrying Henry Hudson, sail through the Narrows.

In the wake of another September morning, New York has become less Manhattan-centered since the attack on the twin towers, less a hub with spokes and more multi-nodal, hastening the booms in Brooklyn and Queens. The old model of urban economics, agglomerated vertically in a clutch of downtown skyscrapers, has gradually ceded to a broader vision of mobility, remote access and live-work neighborhoods. After Sept. 11, proponents of walking, cycling, public transit and public space began to find allies on Wall Street and in City Hall, ones who recognized Lower Manhattan’s viability depending on more than a memorial and commercial skyscrapers where the twin towers had stood.

“For us and many of our friends who started walking across the bridge,” as Manfredi puts it, “9/11 fundamentally changed how we envisioned the city.”

A new urbanism began to emerge from the rubble, in other words — but in tandem with fresh challenges around affordable housing, a widening of income gaps and also climate change, which few in authority or in the media 20 years ago were focused on. Headlines and official plans after Sept. 11 were fixated on bollards and checkpoints, on collective security and preventing more truck bombs and hijacked planes. They focused on the pleas of the grieving families of victims, some of whom lobbied to turn the entire 16-acre site where the towers had stood into a memorial.

The authorities struggled to reconcile families’ demands with the herculean task of restoring downtown. New York’s governor, George E. Pataki, seeking a path to the White House, rushed to settle ground zero’s fate. By June 2002, he had committed to a huge memorial occupying the footprints of the fallen towers, surrounded by new skyscrapers. When the city’s mayor, Michael R. Bloomberg, proposed housing and schools instead, alongside a more modest memorial — arguing sensibly that a living, breathing neighborhood might make a better memorial and answer to the terrorists — he was shouted down.

“The combination of big money, prime real estate, bottomless grief, artistic ego and dreams of legacy transformed ground zero into a mosh pit of stakeholders banging heads over billions in federal aid, tax breaks and insurance proceeds,” as Deborah Sontag wrote in The Times on the fifth anniversary of Sept. 11.

Even so, New Yorkers and city leaders pursued their own plans. Starting in the mid-1990s, residential conversion incentives undertaken by the Giuliani administration, along with efforts by groups like the Downtown Alliance, had already begun to rethink Lower Manhattan as more of a live-work district, an evolution the Bloomberg administration and the Lower Manhattan Development Corporation then encouraged after the twin towers fell, funneling federal recovery money and other resources toward housing, schools, refurbishing the East River Esplanade and Hudson River Park.

Notwithstanding the doomsayers who predicted that no one would ever live or work in tall buildings or the neighborhood again, the residential population in the district tripled to something like 70,000 post-Sept. 11.

As for the World Trade Center site, it was by a fluke of history, six weeks before Sept. 11, that the developer Larry A. Silverstein took the title to a 99-year lease on the property, putting up just $14 million of his own money. After the attack, Governor Pataki and the Port Authority, seeing crucial revenue in commercial development, decided to honor Silverstein’s lease — prioritizing the desire of a private businessman to build millions of square feet of Grade A office space over other possible outcomes at ground zero.

I won’t dwell on all the public money spent constructing the stegosaurus-shaped PATH Station and underground shopping mall called the Oculus by the architect Santiago Calatrava, a visually spectacular $4 billion vanity project of the Port Authority. It’s a pity plans were quashed to dig a tunnel to divert traffic and narrow the highway called West Street, which cleaves Lower Manhattan, separating the trade center from Battery Park City.

That was a good idea. But Goldman Sachs objected.

A few decent commercial buildings got built, including 7 World Trade Center by Skidmore, Owings & Merrill, and the immaculate 4 World Trade Center by Maki and Associates, with its creased corners and a reflective facade that nearly dematerializes on the skyline. Its calm seems an implicit response to the violence and grief.

Next door, the more muscular 3 World Trade Center by Rogers Stirk Harbour + Partners, corseted by steel braces, steps back and upward 80 stories. Between it and 4 World Trade runs one of the restored streets that used to connect the World Trade Center site to the rest of Lower Manhattan, which disappeared when the twin towers were built. The restoration of the streets was an attempt to reknit the urban fabric and integrate the neighborhood.

But the whole trade center site still feels like an alien zone, cordoned off by security, with office buildings around a park whose design and policing tend to thwart joy, or even the eating of a sandwich at lunchtime. The 9/11 Memorial & Museum, with its vocabulary of voids and negative spaces, attracts hordes of tourists, but seems more suited to the Washington Mall than to downtown Manhattan.

Two decades is barely the flap of a hummingbird’s wing in city-building time. During the 18th century, American colonists began poisoning their own freshwater supply. They built toxic tanneries along the shore of the Collect Pond, which, for centuries, had supplied the Lenape with drinking water.

Outbreaks of cholera and yellow fever killed thousands of Americans before Aaron Burr persuaded city leaders to support a new business enterprise of his, the Manhattan Company, which proceeded to tear up the district’s cobblestone streets and lay miles of log pipes to deliver clean water.

But the Manhattan Company was more intent on accumulating capital than on public safety. Today the Manhattan Company is JPMorgan Chase, the largest bank in America. When the log pipes failed, New Yorkers had to construct a new infrastructure of reservoirs and aqueducts to get fresh drinking water, which by the early 20th century had seeded, among much else, the creation of Central Park, the development of Midtown Manhattan around the 42nd Street Library and neighborhoods all across the island.

Eventually, in other words, the crisis of the Collect Pond helped give birth to the modern banking system and what we now recognize as New York City. Progress takes not just time but also unanticipated forms.

Lower Manhattan now has some of the poorest air quality and highest noise levels in town because of traffic congestion. Since Sept. 11, City Hall has failed to add much-needed affordable housing in the neighborhood. And in an old waterfront district with few protections against rising seas, climate change presents an existential challenge that dwarfs the rebuilding at ground zero.

But this set of issues is also a legacy of Sept. 11. The conversation has moved on. After Superstorm Sandy in 2012, a plan called the Big U to gird miles of the area’s waterfront against rising seas started wending its way through the city’s bureaucratic maze. Servicing residents in the neighborhood, a weekly farmer’s market has colonized the plaza under the flying ribs of Calatrava’s stegosaurus. With the pandemic shuttering offices, there’s increasing talk now about converting more commercial buildings into residences.

Plans for a Freedom Center and cultural program at ground zero were canceled two decades ago when Pataki caved to right-wing protests, but the Ronald O. Perelman Performing Arts Center, in a building designed by the firm REX, is now scheduled to open in 2023. And better late than never, the still-undeveloped World Trade Center parcel formerly occupied by Deutsche Bank is slated to become an apartment tower (with subsidized units).

Other dreams of remaking Lower Manhattan today include proposals by organizations like the Financial District Neighborhood Association to institute open streets, shared by cars and pedestrians, and green the zone between the Brooklyn Bridge and City Hall.

The concept pictures 21st-century Lower Manhattan as a kind of high-rise version of the Marais in Paris or the Gothic Quarter in Barcelona.

“We hardly got it perfect,” Carl Weisbrod, the city’s former planning commissioner, responded when asked to sum up what he and other officials involved in the rebuilding accomplished after Sept. 11. “On balance, the area is better than it was — we got it more right than wrong.”

Weiss, the architect, put it another way: “People periodically declare New York over — they did with 9/11, the financial crisis, Hurricane Sandy, now Covid — but the city endures.”

“It turns out that every crisis,” she added, “is a rebirth.”

As Concerts Resume, H.E.R. Will Headline Two Festivals of Her Own