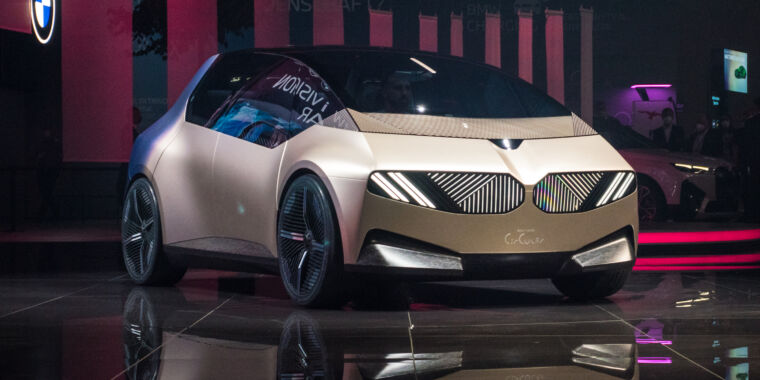 BMW provided flights to Munich and seven nights in hotels so we could attend IAA Mobility and then later this week drive its two new electric cars, the i4 and iX (which you’ll be able to read about in the next few weeks). Ars does not accept paid editorial content.

MUNICH, GERMANY—The BMW i Vision Circular is not the company’s new Neue Klasse. But the new concept, revealed this morning at IAA Mobility, explores idea which the company says will inform that electric vehicle, due in 2025.

Not so much in the way it looks, which is a shame since this compact one-box shape—described by a fellow journalist as a Cyber Twingo—is a refreshing break from oversized SUVs. Instead, it’s the car’s approach to sustainability that BMW is running with—”Circular” refers to the car’s lifecycle, which aims to use entirely recycled materials resulting in a vehicle that is entirely recyclable too. Currently, BMW says that across its brands (which include Mini and Rolls-Royce), it’s already at 30 percent recycled and reused materials.

“The BMW i Vision Circular illustrates our all-encompassing, meticulous way of thinking when it comes to sustainable mobility. It symbolises our ambition to be a pioneering force in the development of a circular economy,” said BMW Chairman Oliver Zipse. “We lead the way for resource efficiency in production and we are seeking to extend this status to all stages of the vehicle life cycle. This is a question of economic sustainability too, as the current trend in commodity prices clearly shows the financial consequences in store for any industry that is reliant on finite resources.”

The I Vision Circular ditches the idea of painted bodywork. Instead, the car’s panels are made from recycled aluminum that’s been anodized, and the bumpers are made from recycled plastic. BMW’s traditional kidney grille is no longer a physical thing, now replaced by a digital surface that also function as the headlights, and the car’s badges and logos are engraved or lasered rather than being physical pieces of trim that have to be attached.

Making a car that can be easily recycled has required BMW to rethink the way it’s put together. Instead of bonding components together, it uses connectors like press studs and quick-release fasteners for things like the seats and instrument panels. BMW has designed the quick-release fastener—which you can see on the back of the seats—to undo with a single rotation of a special tool. Even the steering wheel is 3D printed.

The car’s UI is perhaps the best clue that this concept imagines the car of 2040, freeing it from having to use technology that’s here or almost ready. Forget touchscreens—here you interact with the car’s systems via a 3D printed crystal structure on the dash (or via more traditional controls on the steering wheel). BMW says that “this is where the vehicle’s “thinking” is visualised, allowing the user to see its intelligence at work.” There isn’t even a main instrument display in front of the driver; rather, the i Vision Circular projects its display onto the windshield.

‘An eyesore’: An armada of ghostly cruise ships is clogging the Italian Riviera, and locals are fed up – Fortune

Punjab Congress Crisis: Sukhjinder Randhawa likely to have 2 deputy CMs, one Hindu and one Dalit

‘An eyesore’: An armada of ghostly cruise ships is clogging the Italian Riviera, and locals are fed up - Fortune

Interoperability in the Indo-Pacific Region – IN and RAN start AUSINDEX