How to Motivate Yourself to Resist Temptation and Eat Clean 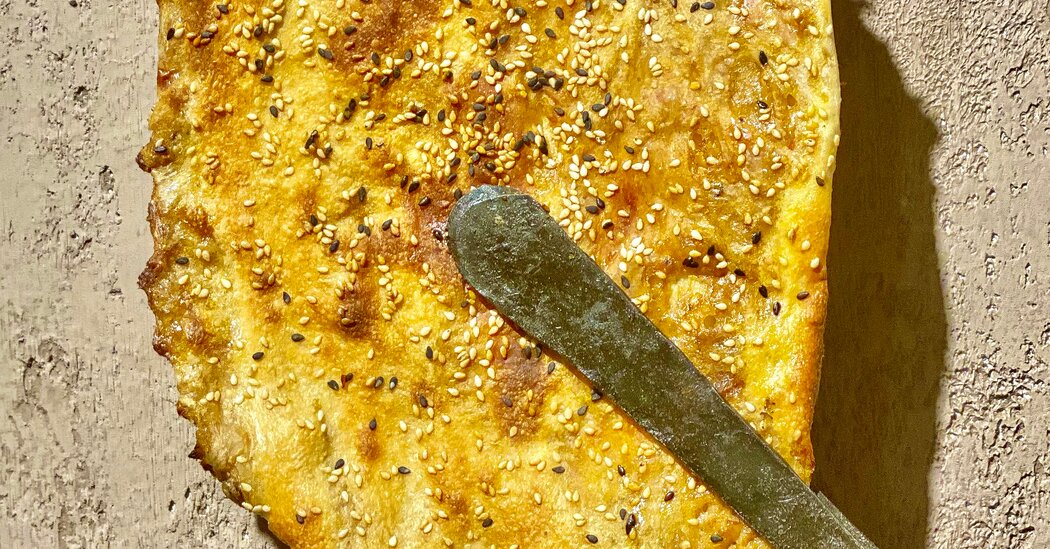 Guokui, a Chinese flatbread, stars at this new Greenwich Village spot. A big, crisp, nicely burnished oval that’s baked in a clay oven, this style of guokui comes with an improbably thin layer of filling that packs a flavorful punch. Here, you can choose from shrimp, spicy beef, pork, chicken, preserved vegetable and sweet brown sugar, among others ($5.75 to $7.50). Spicy beef and the preserved vegetables pack the most heat. The restaurant’s owners, a group of Chinese entrepreneurs, wanted to introduce the version made in Jingzhou City, in Hubei Province, to a wider audience. They taught their chefs, Michael Zheng Chen and Zhuobu Zheng, who are from Guangdong in Southern China, how to make it. Rice noodle rolls, typical of Guangdong, are also on the menu, as are steamed dumplings. Right now, the dish is available for takeout and delivery, but will eventually be served for dining in.

The chef and restaurateur Rodrigo Abrajan had a taco truck, then a restaurant with this name in East Harlem for more than 30 years. Now he has moved the restaurant west and reopened it with a garden, sidewalk seating and a new partner, Victor Medina. The menu features ceviches, tacos, classics like chiles en nogada, and family-style boards loaded with various meats, accompaniments, sauces and tortillas. Reservations are available for parties of six or more, with socially distanced seating.

In the space that was his Plant Food and Wine, the vegan chef and restaurateur Matthew Kenney has installed this pasta bar with only patio seating for now. Dishes like “brown butter” gnocchi with walnuts, sage, pumpkin seeds and dairy-free “Parmesan” and rigatoni with plant-based Bolognese ragù are a couple of the specialties. Desserts include zeppole with hazelnut-chocolate ganache. The restaurant is also selling meal kits to prepare at home. (Opens Friday)

This new outdoor dining offering is kosher, with Raymondo Sanchez, the sous chef of U.N. Plaza Grill, doing the cooking. His menu is varied and features ceviche, tuna tacos, lamb shank samosas, chicken paillard and a rib-eye for two.

The seasonally changing rooftop dining area at Eataly Flatiron is an explosion of flowers this summer: Socially distanced tables are set in a space filled with paper blooms. Even the menu carries floral themes. Crudités and fava bean dip are served in a flower-shaped stoneware pot, and special dinners every other Thursday feature ingredients like pollen, petals and seeds.

Seat your private bubble of up to 10 people outdoors at a table at the back of this newly reopened Basque spot in the East Village. There’s also sidewalk seating under a tent in front of the restaurant. In addition to an a la carte menu for pickup, delivery and outdoor dining, the restaurant offers subscription plans: $30 a month for an assortment of Spanish tinned seafood with accompaniment, $60 per month for Spanish wine and cheeses with accompaniments, and $80 for a combination. (Only the $30 tinned seafood assortment is available for nationwide shipping.) The restaurant is donating $1 of each to-go order through the end of the month to Dine for Democracy, an organization that supports voting rights.

Fries with that? At the TriBeCa restaurant now reopened with sidewalk seating and a new bistro-style menu, every main dish — including roast chicken, skewered kidneys, grilled swordfish and rotisserie lobster — comes with fries. Or a salad.

As a response to the lockdown, the chef closed his Flatiron space, which housed Bouley at Home as well as his test kitchen and an event space, in March. In a letter on his website, he has stated that he plans to relocate to TriBeCa, his former base of operations for more than 30 years. Exactly where he will be moving has not yet been decided, but he said he expected to continue focusing on nutrition, high-quality ingredients and fine cooking. Additionally, his short-run television series, “Magic in a Dish,” produced by the Japanese broadcaster NHK, had its premiere on PBS stations on Monday. He is also finishing a book, “Bouley at Home Living Pantry,” and will develop a line of frozen foods to complement it.

Mr. McGinley and Mr. Lewnes are now at the helm of American Brass, the huge brasserie on the Long Island City, Queens, waterfront. Mr. McGinley, formerly of Bâtard, is executive chef and Mr. Lewnes, who was at Augustine, is the chef de cuisine. The restaurant is serving food outdoors only.

Ms. Schiff, the pastry chef at Gage & Tollner in Downtown Brooklyn, and Elyssa Heller, a food industry professional, will be hosting a pop-up version of Edith’s, a Jewish-American restaurant that Ms. Heller plans to open in Chicago in a year or so, with a possible Brooklyn branch in the distance. Every Thursday through Friday until the end of October, from 9 a.m. to 2 p.m., the two will be serving food at Paulie Gee’s in Greenpoint, Brooklyn.

Finding the Soul of Sonora in Carne Asada

How to Motivate Yourself to Resist Temptation and Eat Clean

What to Watch This Weekend

Outdoor Dining in N.Y.C. Will Become Permanent, Even in Winter

11 Sex Tips From (And For) Trans People