At Museums Around the World, a Focus on Food

This Fish Is as Easy as Dinner Gets

For Haggis Purists in the U.S., the Law Is No Obstacle 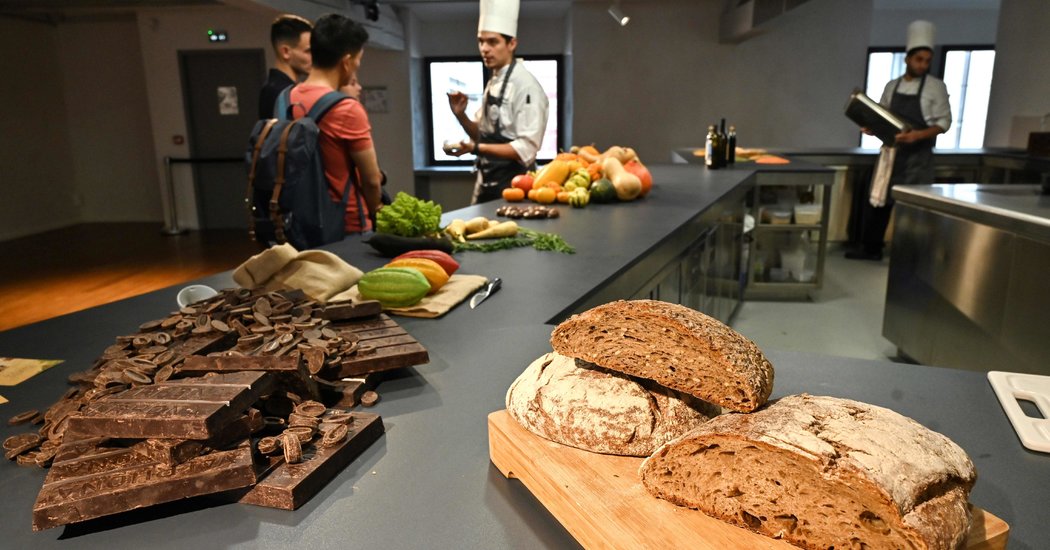 The city of Lyon, France, is hoping to cement its reputation as the cradle of French gastronomy with the opening of a new cultural gastronomy center that is being described as the first of its kind in France, and the largest of its kind in the world.

Six years in the making, the Cité Internationale de la Gastronomie de Lyon (International City of Gastronomy) opened its doors last month inside the Grand Hôtel-Dieu, a former hospital that dates back to the 12th century.

Spanning four floors and 43,055 square feet, the center, which cost €20 million (around $22 million), is designed to be an interactive and sensorial experience for visitors: The smell of chicken bubbling away in a casserole pot wafts through the space dedicated to traditional Lyonnaise cuisine, while a virtual exhibit recreates the sights and sounds of an open-air farmer’s market.

Florent Bonnetain, project director and general manager, said that the culinary center aims to draw on the building’s heritage as a former hospital by exploring the connections between food and nutrition, along with sustainability, economics and international food culture.

“We’re looking at the subject of gastronomy as a whole,” Mr. Bonnetain said. “There are thematic food museums around the world, but here we wanted to take gastronomy and approach it from a cultural and educational point of view.”

Indeed, thematic museums centered around a single food item have been around for decades, be it chocolate, ice cream, French fries or ramen. Then there are the branded food museums from SPAM, Guinness, Coca-Cola or Jell-O. They can tend to be cartoonish or self-promotional, and verge on kitsch.

But in recent years, conversations around food security, climate change and public health have led to more ambitious and thoughtfully curated exhibitions around the world.

After first launching as a mobile exhibition in 2013, the Museum of Food and Drink found a permanent space in a 5,000-square-foot studio in New York City in 2015. It has explored natural and artificial flavors in the food industry, the evolution of Chinese-American restaurants and, next February, will open an exhibition on the contributions of African-American chefs, farmers and producers to food culture.

The executive director, Peter Kim, began pitching the idea in 2012, and said he was met primarily with skepticism and “bewilderment.” But since then, he’s noticed a sea change in the museum’s reception, and the way people think about food, thanks to a confluence of factors: food-related public policies, immigration, media attention, climate change and growing interest inside academia.

“All these things feed into each other and reinforce an understanding of food as being much more than just gustatory experience. Instead, there’s an understanding that when you take a bite of something, you plug into the world every time,” he said.

International media interest also helped the Disgusting Food Museum — which opened last fall as a temporary exhibition in Malmӧ, Sweden — become permanent this January and organize pop-up versions globally. Despite its name, the exhibition is meant less to provoke revulsion, but to challenge people’s notions of what’s edible and what’s not, as one person’s trash, be it maggot-infested cheese or bull testicles, could be another person’s delicacy. Moreover, curators point out that changing our ideas of disgust could help us embrace more environmentally sustainable foods — notably bugs and insects — in the future.

In Europe in recent months, the Museum of Mankind in Paris opened the exhibition “I Eat, Therefore I Am,” exploring the evolutionary, ecological and cultural role of food in civilization, and the Victoria and Albert Museum in London just wrapped up “Food: Bigger than the Plate,” which looked at urban farming, gastronomy, politics and sustainability.

At the Cité, working kitchens, experimental laboratories and spaces for conferences and debates are designed to enrich the visitor experience. The overall concept mirrors Bordeaux’s Cité du Vin, a wine museum which opened in 2016 and explores winemaking throughout civilization and also hosts industry conferences.

“We know that gastronomy is a big tourist attraction for Lyon,” Mr. Bonnetain said. “With the museum, our hope is that visitors will be able to experience gastronomy differently here. We want to be a complementary experience to restaurants in Lyon.”

52 PLACES AND MUCH, MUCH MORE Follow our 52 Places traveler, Sebastian Modak, on Instagram as he travels the world, and discover more Travel coverage by following us on Twitter and Facebook. And sign up for our Travel Dispatch newsletter: Each week you’ll receive tips on traveling smarter, stories on hot destinations and access to photos from all over the world.

The Full Frost Moon Is In Taurus, & It’s Time To Indulge

Who’s in the Kitchen: A Quartet of Culinary Narratives

This Fish Is as Easy as Dinner Gets

For Haggis Purists in the U.S., the Law Is No Obstacle

Haitian and Jamaican Patties, Traditional and Not, in Brooklyn

With Mezcal, Smoke Is Only Part of the Story

How to Throw a Dinner Party Like a Gallerist

The T List: Five Things We Recommend This Week

Cheese Smells. Deal With It, a German Court Rules.

Your Thanksgiving May Be Classic, but Your Leftovers Don’t Have to Be