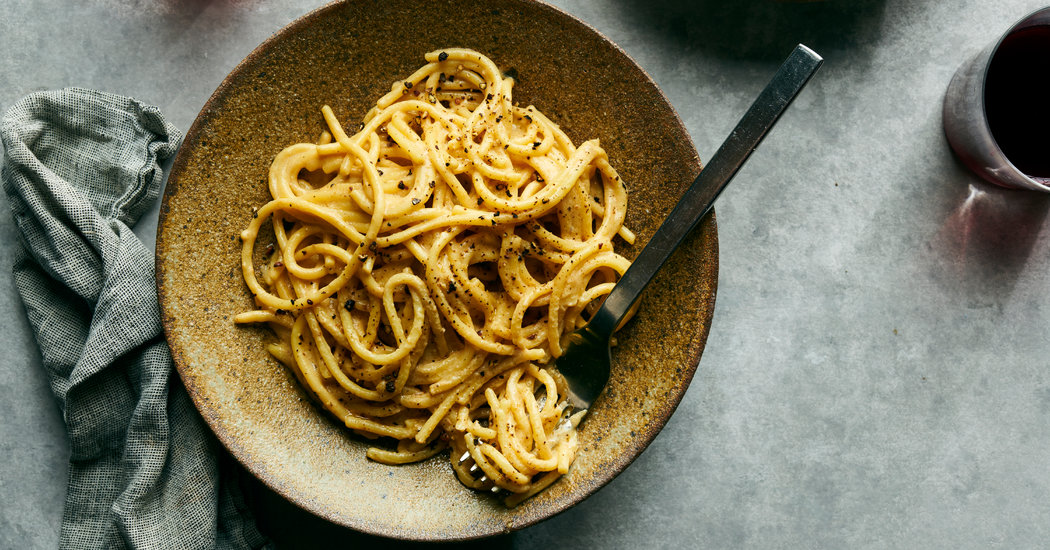 Cacio e pepe pasta — quite literally, cheese and pepper pasta — is as defined by its ingredients as peanut butter and jelly.

Like many classic Italian dishes, it requires just a few good-quality items (pasta, cheese and pepper) and attention to technique (emulsifying grated cheese and starchy pasta water into a silky, salty sauce). But it turns out that the cheese isn’t entirely fundamental: Cacio e pepe’s flavor is dominated by pepper and salt, not specifically cheese.

The combination of “salinity and pepper is the flavor that jolts you,” said Brooks Headley, the chef-owner of Superiority Burger, a vegetarian restaurant in the East Village of Manhattan.

Unlike vexing bait-and-switch concepts like a cauliflower steak or pork-free mushroom bacon, this vegan take on cacio e pepe is shockingly similar to the original, delivering a result that is so uncannily similar, in both mouthfeel and flavor, that the people you feed might not realize it lacks dairy.

The secret lies in a combination of nutritional yeast, miso and cashew butter that packs a salty, complex funk to rival pecorino or Parmesan.

Many vegan recipes for creamy pasta imitate the richness of cheese with soaked nuts, especially cashews, whirred into cream. Instead, store-bought cashew butter provides heft and creaminess to this dish in an instant.

Once limited to the realm of health food stores, the condiment is now widely available, and its subtle taste is less pronounced than that of other nut butters, imparting the necessary fat without flavor.

The requisite salt and funk come from both the miso, earthy and high in sodium, and the nutritional yeast, which adds tang. (A staple in many vegan pantries, flaky nutritional yeast is a vitamin-rich seasoning that is often used to add cheesy flavor and bolster health benefits to a variety of dishes, from roasted vegetables to popcorn.)

Then, there’s technique, elevating all the elements, in just three primary steps: Cook your pasta, toast your peppercorns in olive oil, then toss in your pasta with its starchy water and its flavorings (miso, nutritional yeast and cashew butter), adding just the right amount of pasta water to achieve that perfectly glossy-but-not-greasy coating.

Like the classic, it delivers a surprisingly complex, weeknight-friendly bowl of pasta with just a few vital ingredients. This version just happens to be vegan, and defiantly delicious.

The Way to Cook Now

What Will We Eat in 2020? Something Toasted, Something Blue

Growing Meat in a Lab That Doesn’t Look Like Mush