Fondue Flavor, but Make It Pie 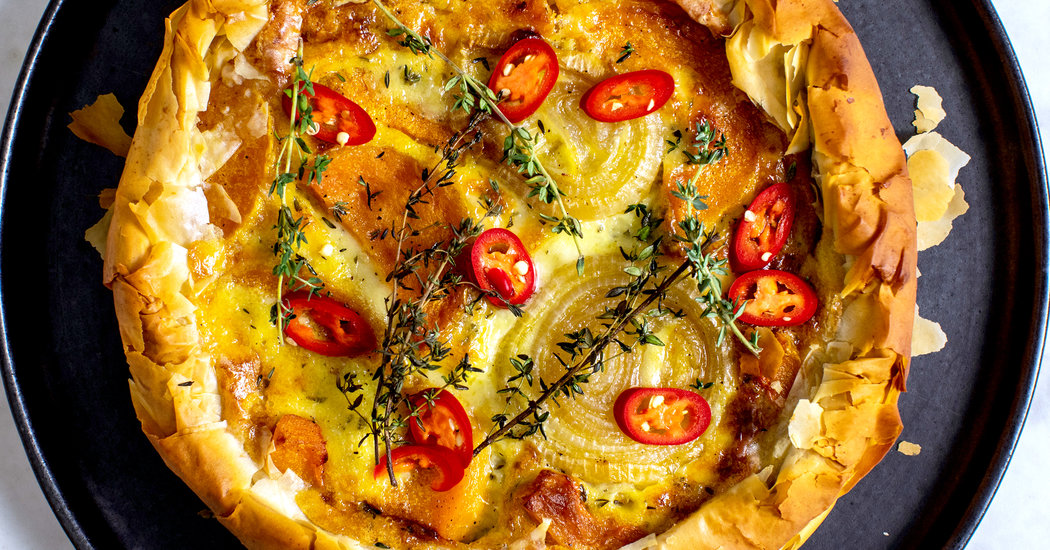 LONDON — The combination of wine and cheese is one that I particularly cherish. Often, instead of dinner or as a bedtime snack, I see my day off with a glass of Chianti and chunk of Parmesan or mature pecorino. I am obviously not the first to discover the power couple that is wine and cheese, but it works particularly well for me because, after a day of testing recipes, all I want is to tickle my taste buds without overloading my stomach.

Though it happened some time ago, I suspect that I first noticed the particular alchemy that happens when cheese meets wine during a ritual that took place in our home every couple of years, long before I was actually allowed wine. I am talking about the fondue ceremony, which many people over a certain respectable age may still remember.

I assume it was similar everywhere (unless you were living in Switzerland, I suppose): a dusty old set brought out from hibernation; cheese and wine bubbling away under ethanol; room smelling like incinerated cheap vodka; bread stuck on sticks; bread dunked; bread falling off sticks never to be found; cheese setting and sticking to the bottom of the pan; party over and fondue set tucked away for as long as it takes for the memory to fade.

You are right to detect a note of cynicism here, but it is true that I did start to enjoy wine, gradually, from one fondue night to another. The cheese (creamy, salty and rich) was an ideal vehicle for introducing a tender palate to the wonders of wine (acidic, bitter and complex). The two have never completely managed to disentangle themselves in my mind. On the rare occasion that I take a break from wine — say, for a short-lived New Year’s resolution — cheese seems to lose its point.

Though this may seem only to say something about me and my private flavor associations, the symbiosis between wine and cheese, at least in fondue, is validated on a chemical level as well. The tartaric acid in wine, and the wine’s diluting effect on the melted cheese, are essential for preventing the casein proteins in milk from clumping and creating the all-too-familiar sight of a cheese sauce seizing up and turning tight and stringy.

I love it when taste considerations are endorsed in this way by science but I am afraid that, in a cheese fondue, the wine doesn’t dilute the cheese quite enough to make it, at least for me, an everyday affair.

The fondue flavors that I like so much but can’t have too much of work best in dishes where the intensity of the mature cheese is moderated by vegetables, like in this butternut squash and fondue pie. For this time of the year, I chose a squash, its mellow sweetness blending effortlessly into the creamy sauce. Onion and garlic are brilliant additions at all times, their sulfur compounds cutting through fat like a knife.

On top of these vegetables, my fondue pie is served with a quick pickle of red chiles. This final flourish of acid and heat, though seemingly odd in this very Swiss context, does an excellent job finishing what the wine started: complementing cheese with acid, making you want more.

The dominant flavor and sensation in this dish will be its rich cheesiness. You need an incisive wine that can cut through the creaminess. That calls for a fresh white with plenty of lively acidity. Chablis or Sancerre would be delicious, as would an Austrian riesling. If you wanted a regional pairing, you could look for a white from Savoie, in the Alpine foothills on the French side of the Swiss border. A Roussette de Savoie, made from the altesse grape, would be terrific. So would a Seyssel sparkling wine, also from Savoie. Lambert de Seyssel is a fine producer. If you found a chasselas from Switzerland, it would be fun to try, though the wines are sometimes low in acidity. If you prefer a red, try a Beaujolais or any number of Savoie reds. ERIC ASIMOV

Hey, Look! Nonna and Her Pasta Are on YouTube

Putting the Fried in Fried Rice

When Did Gluttony Become So Glamorous?

Is There Such a Thing as a ‘Sugar High’?

How To Be Happy When You’re Single (Yes, It’s Possible)

The Joy of Cooking Naked