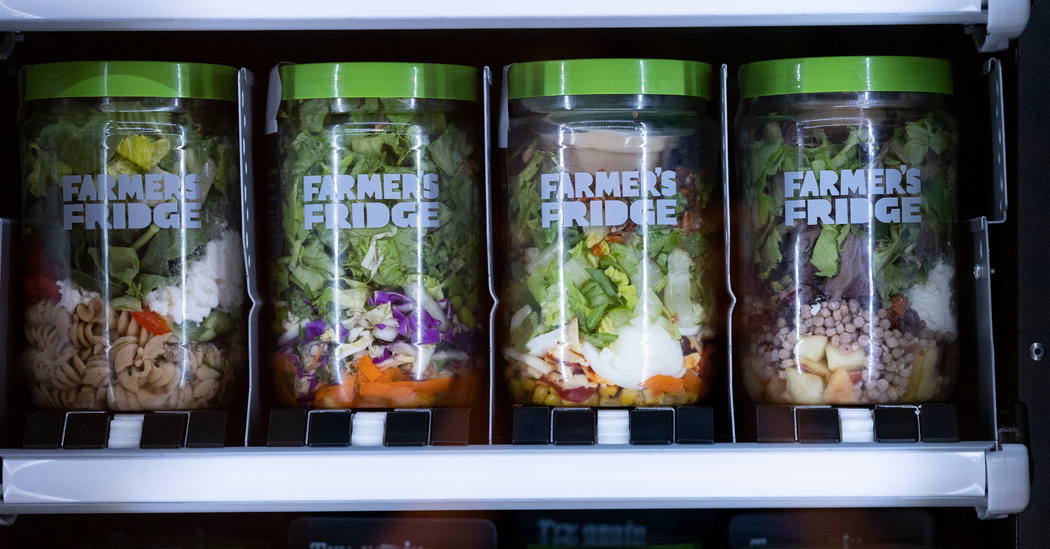 On Oct. 30, an inspector from the New York City Department of Health and Mental Hygiene was making her rounds when she came across a vending machine unlike any she seen before. Called Farmer’s Fridge, it was made of washed white wood, with a giant touch screen and a built-in recycling bin. Inside was not the usual candy and soda, but tall jars packed with salad greens, Thai noodle and falafel bowls, and yogurt parfaits.

Within hours, her concerns were relayed to the highest levels of the department. Two days later, the Chicago-based start-up Farmer’s Fridge voluntarily shut down all 55 of its vending machines in New York.

In negotiations over the last month, the department and the company have agreed that each Farmer’s Fridge machine will be treated, for the most part, as a restaurant — or “food service establishment,” per the health code. Every machine will require a permit, inspections and the same kind of letter grade posted everywhere from McDonald’s to Le Bernardin.

The agreement could have repercussions for a small and growing number of businesses that are seeking new and sometimes high-tech ways to sell fresh and convenient foods. “Companies like Farmer’s Fridge signal new changes to the NYC food space and we’re working to create the best enforcement structure to protect the health and safety of New Yorkers,” the department said in a statement.

The regulations laid out in Article 81 of the city’s health code state that vending machines do not require individual permits or inspections. The rules reflect the fact that most vending machines sell foods like soda, candy and chips with near-infinite shelf lives that, at least in the short term, don’t pose risks to public health.

The health department sees it differently. Salad greens, which make up a significant portion of Farmer’s Fridge’s offerings, are vulnerable to food-borne illness: Just last week, the Centers for Disease Control and Prevention issued a sweeping recall of all romaine lettuce grown in the Salinas Valley of California.

“Selling certain prepared foods from a vending machine can create a risk of food-borne illness,” the department said in its statement. “The Health Department worked with Farmer’s Fridge to be sure their equipment would hold food at safe temperatures, and that foods were properly labeled and from approved sources.”

New York regulators are not the first to be baffled by the oxymoron of a vending machine full of fresh food. Health officials in Chicago, where Farmer’s Fridge opened six years ago, were also flummoxed at first by what, if any, permit should be required, said the company’s chief executive, Luke Saunders.

Eventually, he said, he was given a license to operate, along with a special sticker to display on every machine with Mayor Richard M. Daley’s name on it — even though Rahm Emanuel was mayor at the time. The company also has machines in Philadelphia, Milwaukee and Indianapolis, and started operating in New York and New Jersey in July.

It may seem surprising that Farmer’s Fridge has come under scrutiny. The company’s machines, which are mostly in corporate cafeterias and hospitals, have more food-safety features than many traditional vending machines. The internal temperature of each machine is taken every five minutes and uploaded to company servers. Should a refrigerator reach an unsafe temperature, it automatically stops dispensing food. The machines also track how long food has been inside, and will not release a product after its sell-by date.

Last week, according to Farmer’s Fridge, the health department ruled that its machines were food service establishments. The company was required to file an application and pay $280 — the same amount a restaurant would pay — for each machine.

And while the department has bent some of the rules — Farmer’s Fridge says it will not need to offer a restroom at every machine — the company has had to meet some of the standards for a restaurant.

For example, Farmer’s Fridge will provide the department information about where hand-washing sinks are available to its drivers who stock the machines. (In the case of one machine, in a public building lobby, Mr. Saunders said the solution may be the bathroom in a nearby bodega.) The company is also adding thermometers to its machines so inspectors can read temperatures without consulting company records.

The department’s move may affect other start-ups, like Fresh Bowl, a New York based fresh-food vending company with four Manhattan locations. A company representative would not comment on its current permitting status, though she said Fresh Bowl was in communication with the health department.

If all goes well, Farmer’s Fridge plans to reopen its machines starting next week, and to continue its rollout in New York and New Jersey. Mr. Saunders estimated the shutdown had cost his company about $150,000 in lost sales and legal expenses.

“It sucks when you’re on the receiving end of this, but on the whole it was not a bad experience,” he said. “New York regulators genuinely seem to be acting out the desire to keep people safe and understand a new business model. You always have to manage the chaos when you’re doing something new and different.”

Friendsgiving Has Become Just as Fraught as Thanksgiving

Turkey Trouble? At Butterball, Operators Are Still Standing By

The One Product R29 Editors Swear Has Improved Their Sleep