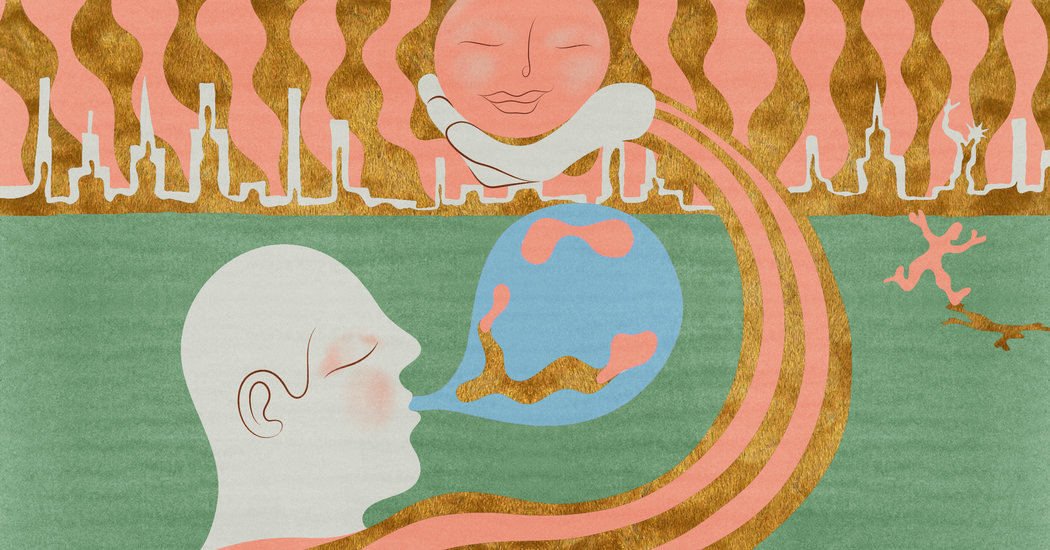 A few months ago, on a Megabus ride into New York from Philadelphia, my assigned seat was the front row of the bus’s upper level, providing an overwhelming panoramic view of the pavement ahead of us — like one of those 3-D IMAX experiences, except instead of being about volcanoes or sharks, it was about the slow crawl along I-95 into the dense web of Manhattan. Like most IMAX movies, this one made me nauseated about five minutes in. Rifling through my backpack for some headphones to distract myself, I found, instead, a small white pack of ginger gum that I bought on a whim months before.

The package, about the size of a deck of cards, had promised to protect me in perilous situations like cruise ships, airplanes climbing away from the earth or pregnancy. As I am no stranger to motion sickness and hangovers, it called to me. If the gum could deliver me from standard-issue horrors like those without any of the disorienting, sedating side-effects of Dramamine, could it also soothe the more existential varieties of unrest that come with everyday life?

Each tablet contains the equivalent of about one gram, or about a quarter of a teaspoon, of ginger. As the coating dissolves, you get one swift, heady thwack of the spice. In the same way that a ribbon of pickled ginger can cleanse the senses of the fishy oils in a bite of mackerel, or a gingersnap after dinner can soften the lingering taste of raw garlic in your mouth, the gum has a clarifying quality, overpowering whatever sights, smells and tastes are haunting you.

Ginger has been used since antiquity to aid digestion, reduce inflammation and settle uneasy stomachs, though it’s a bit of a tossup among contemporary scientists whether it really works better than placebos when it comes to nausea. In Chinese medicine, it’s used for its warming, soothing effect on the stomach. In ayurveda, it’s brewed into tea, dried into a powder and eaten raw before meals, and its nourishing power is used to ward off a variety of things including hiccups and ulcers. And every vomiting incident of my Western New York childhood was greeted with a small glass of Schweppes ginger ale on ice.

In movies, nausea tends to be a stand-in for a character’s shortcomings, whether the character is a novice sailor or a dainty woman with a weak constitution. In everyday life, it’s more of an embarrassing inconvenience. You can’t just stagger up to the captain of the Staten Island Ferry as you’re rounding Governors Island and ask him to please turn the boat around. There’s no asking for a sleeve of saltines halfway through a tasting menu.

When you’re a food writer like me, nausea is even more of a killjoy. My stomach is a tool that I need in order to do my job well, and I use it more or less as a giant dumpster for all of the experiences (good and bad) that I’m trying to fit into any given day. There are moments of doubt — tinges of dread when, a few hours after eating an ill-advised late-night batch of chicken wings from the Checkers on my corner, something starts to feel off kilter. More often, it’s impossible and fruitless to try to trace the origins of the feeling when it wakes me up at 4 a.m. or hits just as I’m stepping into a subway car — and it’s instantly compounded the moment I think too much about it.

Ruminate too much on a hangover or the squishy sound of your own heart valves during an echocardiogram, and the queasiness will collapse in on itself and become insurmountable. Sometimes a flicker of adrenaline turns itself into panic, which turns itself into a churning stomach, and suddenly you can’t remember which came first — the panic or the churning. You can’t tell anymore if you’re scared to be stuck on a train underground while feeling vomit-prone, or if you’re just scared to be stuck underground at all.

Part of the fun and the terror of living in a city of eight million people is everything that you can’t control. You can do your best to plan out the minutiae of a day, never anticipating that you’ll overhear a surgeon’s conversation about cauterizing brains, or see a subway magician pull a live rabbit out of a hat, or unwittingly find yourself in the midst of a stranger’s marriage proposal. Sometimes, I find myself reaching for some kind of eject button that doesn’t exist, but the ginger gum is the closest thing I have to a semblance of control. It’s a way to reset my palate and my disposition so that I’ll have the fortitude to face all of the looming unknowns of the day.

It’s hard not to get caught up in the sense of suspense when a boat pushes off from the shore, a Megabus hits the highway or a train pulls away from the platform. It’s too late to turn back, but too soon to know how it will end. Having a pack of ginger gum in my bag has become a talisman against this sort of spiraling; there’s a sort of Pavlovian placebo effect at play, and I start to feel better the second I hear the tiny pop of my fingernail’s puncturing the foil-topped gum compartment. It’s part cure but also part superstitious ritual — a soothing set of tiny actions that makes the ground beneath me feel solid again.