The Way to a Better Meatball 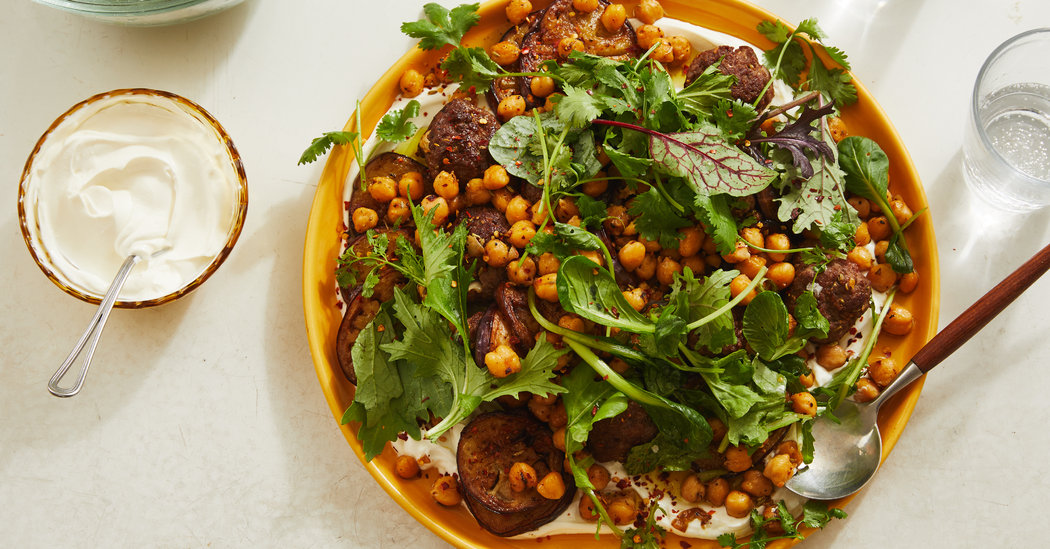 Good morning. Alison Roman likes her meatballs crisp, her eggplant, too, and she never puts sauce over them but under, so that she can thrill to the crunch. This week, for the Food section we printed overnight and sent out in vans and sedans to deliver to the vicinity of the front porches, stoops and porte-cocheres of our newspaper subscribers, she gave us a fine new recipe to celebrate those textures, for lamb meatballs with chickpeas and eggplant (above). It’s a layered, restaurant-style dish that is fancy without being too complicated, and you could rustle it together in under an hour for dinner tonight.

Another option: a no-recipe recipe, a simple prompt to cook instinctually on a weeknight, with improvisation in your heart and speed on your mind. To wit: sautéed duck breasts with five-spice powder, alongside roasted eggplant and a pile of rice. For the rice, make rice as you usually do, or according to the instructions of Tejal Rao. For the eggplant, split a couple of small ones lengthwise, hatch their interiors without splitting the skin, and paint them with honey cut through with a little olive oil and cider vinegar, a bunch of kosher salt and freshly cracked black pepper, a few cloves of garlic roughly chopped and shoved into the crevices of the vegetable, then roast them in a hot oven until they start to collapse.

Then, for the duck, a lesson I learned from the wily kitchen magician Manny Howard. Hatch the skin of the breasts as you did the eggplant, cutting deep into the fat without scoring the meat of the bird, and season the breasts aggressively with more salt and pepper and a lot of Chinese five-spice powder or the North African spice blend ras el hanout. Slide them into an oil-slicked sauté pan set over medium heat, and slowly toast the spices on the skin of the bird, allowing everything to get crisp on what the marine engineers call a slow bell. Let that go a long time, being careful not to burn the spices or the skin.

Turn the breasts over and allow the meat to cook until it is just past rare at the center. Then, let them sit on a carving board for a few minutes while you assemble the rice and the eggplants on plates or serving platters. Slice the duck breasts thickly against the grain and serve, maybe with a scattering of sliced scallions across the top.

I have other ideas for you, of course, if meatballs and duck are not in the cards. I love this new recipe from Melissa Clark for roasted sausages, grapes and onions in a vinegar-spiked sauce, which would be great with polenta if you’re serving a family filled with growing humans, or with a sharp green salad if you’re not. I feel similarly about these Cheddar biscuits that Erin Jeanne McDowell came up with as well, unapologetically reminiscent of the ones served at Red Lobster, and a marvelous accompaniment to a platter of a Yucatán shrimp.

And if all that’s a little too much for you, try Ali Slagle’s recipe for cauliflower adobo, a vegetarian take on a Filipino essential, and serve it with rice.

There are many thousands more recipes you could cook this week waiting for you on NYT Cooking. You do need a subscription to access them, yes. Your subscriptions are what allow us to continue to do this work that we love. (And if that love’s reciprocal? Think about getting someone a gift subscription!)

You can find further cooking inspiration on our Instagram page (Krysten Chambrot’s miso-peanut butter cookies, wow!), and on our YouTube channel (here’s Priya Krishna making her Indian-ish baked potatoes). We’re on Facebook, as well, where we maintain a lively community of home cooks that you may wish to join. And of course we’re on Twitter. We’re journalists. We’ll be the last ones there.

Housekeeping: Please write if you run into problems with anything. We’re at cookingcare@nytimes.com and we will get back to you. We aim to please.

Now, here’s some news you can use: Julia Moskin taste-testing plant-based meats for us. Also in The Times today, Eric Asimov on an Oregon winemaker adapting to climate change in her vineyard; Priya on the Diwali caucus on Capitol Hill; and restaurant reviews from Pete Wells, Tejal Rao and Ligaya Mishan.

It really doesn’t have anything to do with food or cooking, but you need at least to watch the pilot for “The Politician” on Netflix. It’s delicious to watch good actors work.

Jack Kerouac died 50 years ago Monday. In The New Yorker this week, Michael Schumacher presents journal entries Allen Ginsberg made in the wake of the news, diary and poem alike: “At dusk I went out to the pasture & saw thru Kerouac’s eyes the sun set on October universe, the first sun set on the first dusk after his death.”

Finally, here’s Peter Kaminsky, old salt and cookbook genius, who first introduced me to the pleasures of burning meats and fruit, writing in Anglers Journal about huge trout in Iceland’s biggest lake. This guy! I’ll be back on Friday.

A 5 Minute Wind Down Routine For Hectic Days

Famous Single Women I Want To Be When I Grow Up