These Armenian Flatbreads Stuffed With Greens Are the Perfect Snack 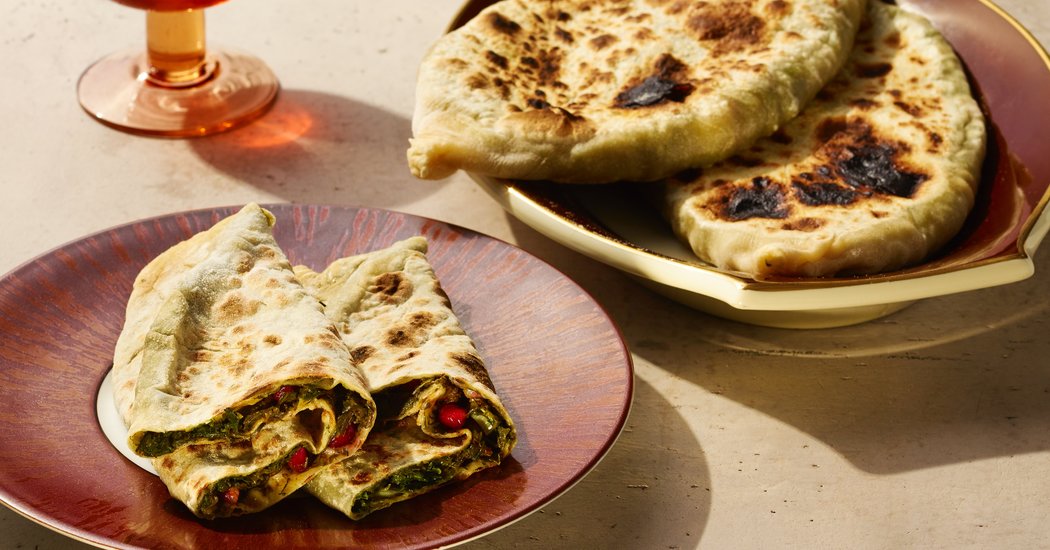 Rusana Sayadyan threw down a ball of dough the size of a tangerine and rolled it out into a big, floppy disc, lifting the edges to spin it around. Thirteen years ago, she was an apprentice at a bakery in Armenia, learning to make jingalov hats — the football-shaped flatbreads stuffed with a dozen varieties of herbs and green leaves. Now she was here, in Los Angeles — an expert — teaching someone else. She pushed back her puffy white bonnet with the back of her arm and mixed a handful of greens with salt, oil and paprika. After she scooped the mixture onto the dough, she used her fingers to pinch it shut, sealing the greens inside, then flipped the disc onto a hot griddle.

Zhengyalov Hatz, where Sayadyan works, opened in November. It has a few locations in Armenia, but this is its first in America. The bakery doesn’t bother with a food menu. What would be the point, when it sells only one thing? Everyone who walks in is there for hot jingalov hats the size of a newborn, and they’re likely to be greeted with the only question that matters: “How many?” Sayadyan makes more than 100 each day, chopping sorrel and spinach, beet leaves and dill, cilantro and scallions, with a sharp knife that makes clean cuts, so the greens stay green. The key to a good jingalov isn’t just the dough, she told me, which is nothing but flour, water and a little salt, kneaded until it’s smooth. The key is the greens — washed, thoroughly dried and mixed together in the right kind of ratio, so that sour leaves creep up on the sweet ones, and so that the final bread is tangy and juicy.

In “Lavash,” an Armenian cookbook written by Kate Leahy, John Lee and Ara Zada, the jingalov recipe suggests pomegranate seeds to add more tang, and some home cooks add finely chopped fruit leather made from sour plums to create the same effect. When the authors were in Armenia, researching the book, they learned that some resourceful jingalov vendors will even add citric acid to mimic sour greens, when wild sorrel and other key leaves are out of season.

When she was growing up in Los Angeles, the journalist Liana Aghajanian ate her grandmother’s version of jingalov, in which the greens were dressed with melted butter instead of oil. And later, she went to Nagorno-Karabakh, in the mountains of the South Caucasus, a region famous for its jingalov, and where women set up stalls to make it fresh on the streets. They work so fast, they make it look it easy — pinching the dough together in just a few seconds and flipping it confidently. The bread is filled with a number of herbs and wild greens, Aghajanian explained, as many as 10 to 20 kinds. Earthy, tender greens like chard, spinach and purslane might be the bulk of the mix, but tarter leaves like sorrel, radish and dandelion mess with the flavor, adding dimension and acidity. Herbs like dill, chervil, cilantro and tarragon can change its direction, too. Many of the greens used in Nagorno-Karabakh are indigenous to the area and impossible to find in Los Angeles. But Armenians from the diaspora make their own versions, wherever they are in the world, subbing in what greens are available at grocery stores, window boxes and backyards. “Food isn’t a static thing,” Aghajanian told me. “We take it and we change and that’s one way diasporans have connected with that region.”

If you can bring yourself to wash, dry and finely chop a few pounds of greens — whatever’s available where you are — the work of making jingalov hats is mostly done. Prepping the greens is a small project, but the dough itself comes together in a few minutes. Pinch it shut — messily is fine — and the flatbread cooks with no oil, on a hot griddle, until it’s lightly speckled with brown char. Then eat the bread plain, before it’s cooled all the way down, and the insides are still steamy. It doesn’t need anything on the side.

Sayadyan forms the bread into perfect almond shapes, huge and precisely symmetrical, with no holes, evenly thin all the way across. Each one is indistinguishable from the next. It’s very unlikely you’ll do the same on your first try, but as long as it’s stuffed full of generously seasoned greens, even a wonky, lopsided jingalov is a joy to eat.

A 7 Day Diet Plan For Men