How to Build a Pretty Macrobiotic Meal Like a Jewelry Designer 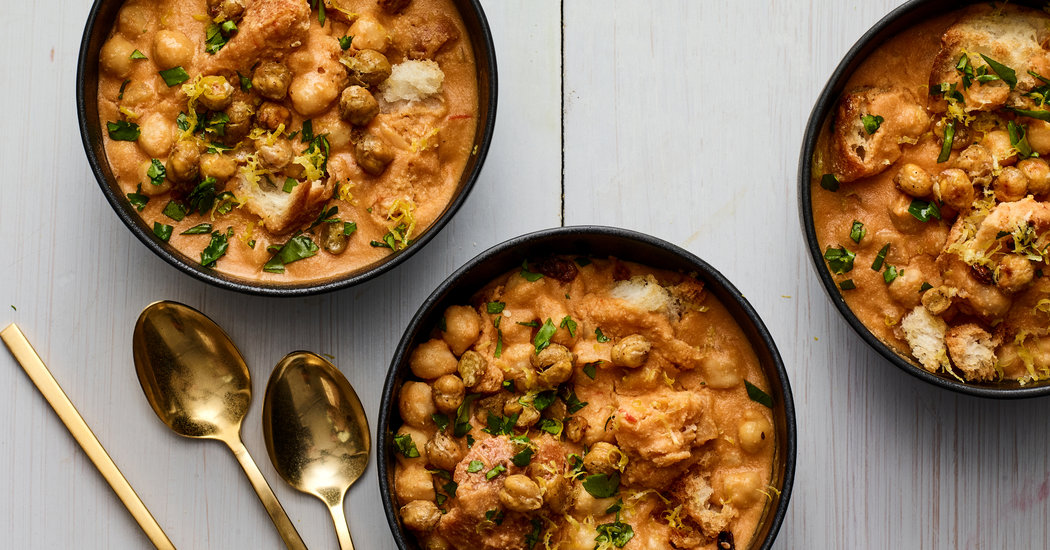 Do you have a desert island bean? Joe Yonan does, and it’s the chickpea.

Mr. Yonan, the food editor of The Washington Post, adores all beans, so much so that he wrote an entire cookbook starring them, “Cool Beans” (Ten Speed Press, 2020). But he does play favorites, and the chickpea, with an earthy yet mild character that goes with nearly anything, comes out on top. Especially when it’s simmered with loads of garlic and cumin, like in a Tunisian lablabi.

In Tunisia, lablabi is a classic chickpea soup or stew that’s eaten any time of day — for breakfast, lunch or dinner — and there are countless ways to make it. Sometimes it’s served over chunks of bread for thickness, sometimes it’s served thin and brothy. You can top it with an egg, a mound of herbs or a dollop of harissa, or you can leave it simple and plain. To Mr. Yonan, it hits all the right notes: spicy from the harissa, sour from the lemon, rich from the olive oil.

But he does take some liberties in his version of the dish, which is based on a recipe from Anissa Helou’s cookbook, “Feast: Food of the Islamic World” (Ecco, 2018).

“I had this compulsion to change the textures and make it creamier, then add a crunchy garnish at the end,” Mr. Yonan said.

To get the crunch, he bakes za’atar-coated chickpeas until they’re crisp and golden. For the creaminess, he purées some of the cooked beans in a blender with olive oil, then stirs them back into the broth.

His tweaks make for a stewlike soup that’s deeply satisfying and full of varying textures, both silky smooth and crunchy.

It’s also adaptable. I’ve made it in a pot on the stove, and in an electric pressure cooker. Both worked well, though the pressure-cooked chickpeas were slightly more tender. And tenderness is imperative for this kind of recipe, so they break down completely in the blender without leaving any gritty bits to annoy your tongue.

As for the inevitable question of substituting canned chickpeas for the dried, Mr. Yonan says not to for the soup, because you’ll lose too much flavor in the broth.

Dried chickpeas might take longer to cook, he said, but their complex flavor is worth it. And that’s true whether you’re stuck on a desert island, or cozied up in your kitchen with a fragrant pot of chickpeas bubbling away on the stove.

Yes, You Can Have A Baby If You Only Have One Fallopian Tube

How to Build a Pretty Macrobiotic Meal Like a Jewelry Designer

The Agriculture Queens of Louisiana

‘Like The Camera Wasn’t Even There’: Capturing Nude Cooks

Venus Is Entering Aries, So Expect Sparks To Fly