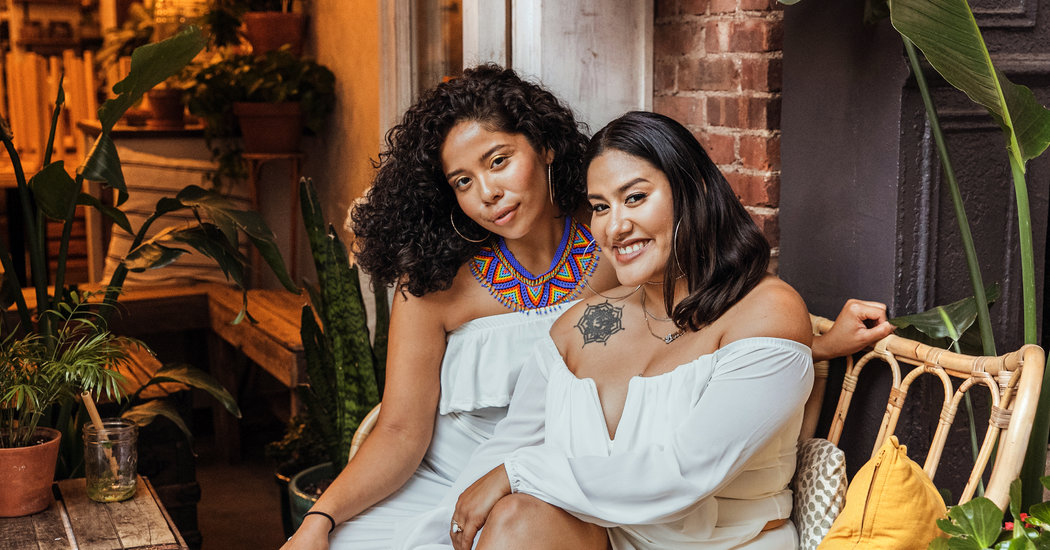 Veggie Mijas is a collective of over 300 nonbinary, female-identifying people and women of color in 12 chapters across the United States, and the group — originally founded by Amy Quichiz and Mariah Bermeo — facilitates community building through vegan potlucks, cleaning up community gardens and hosting youth seminars to teach children about the importance of growing their own food.

“Veggie Mijas is about reclaiming what a plant-based lifestyle looks like, which isn’t just about not eating meat,” said Ms. Quichiz, 24, a native of Queens, N.Y., who is Peruvian and Colombian. “It’s about what we can do for our communities, and about reflecting on the systems around us that impact the choices that we make.”

In 2018, following her move back to New York City after college, Ms. Quichiz started asking for recipes from other Latinx people in her community as part of her own many attempts to start eating healthier in the aftermath of late-night binges as a student. She started an Instagram account and then a website as a resource for recipes and community. The response she got prompted her to start the collective.

For Ms. Quichiz, her frequent attempts to start eating better were interrupted by what she said were her lack of knowledge and systemic racism that creates food deserts in many poorer neighborhoods. The result is what some members of Veggie Mijas refer to as “white veganism,” and a lack of resources when it comes to eating well.

“Mainstream vegan spaces, both online and in person, aside from being predominantly white, have been middle-class and able-bodied,” said Brandie Skorker, 33, a Veggie Mijas organizer from Boston.

“We need spaces where we can talk about the food justice issues we’re so passionate about and come up with solutions while creating bonds and community,” Tammy Arias, 25, who started a chapter in Miami, wrote in an email.

Here are some solutions.

Consider every aspect of food: production, how it’s labeled and how it’s being sold.

“Just because it says ‘organic’ doesn’t mean it’s healthy,” Ms. Quichiz said, noting soy as an example. “It’s technically good for you, but you’re not supposed to eat it all the time, and it’s not necessarily ethically grown. The revolution we want doesn’t include capitalist brands profiting off people of color. It’s about supporting ourselves by learning what’s good for us.”

Know where your food comes from

The easiest way to know about your food is to grow it yourself, which is an unrealistic expectation for many. But you don’t need your own farm; volunteering at a community garden is a great way to gain access to land on which to plant, while also engaging with your community.

Farmers’ markets are another way to be conscious of where your food comes from. In New York, for example, farmers’ markets accept food stamps. Veggie Mijas — mijas is a Spanish term of endearment — offers an online directory on its website that helps you find a farmers’ market in your community.

Write down your parents’ recipes

Learn about the plant-based foods your parents ate and incorporate them into your diet. When Ms. Quichiz started eating a vegan diet, she took home a bag of quinoa from Whole Foods. Her father laughed and said he used to eat quinoa as a poor child in Peru. Finding out the history of different vegetables and recipes shows you how they have been commodified, Ms. Quichiz said.

Looking into your cultural background can also teach you about other ways food can be important. “Food is medicine,” she said. “Our ancestors made healing tools and survived because of it.”

But don’t be afraid to change those recipes

Another problem the women have encountered, even within their own communities, is that people believe they can’t cook traditional dishes without meat and dairy products. When Ms. Quichiz recently spoke at the University of California in Santa Barbara, a student told her she “didn’t know how to go vegan as a Salvadoran, because she would miss her food too much.”

For Ms. Skorker, healthy options were generally inaccessible in her community in Vermont, so her friends would just opt for fast food. When she was 25, she wanted to make a life change and sought out community to help her do so but wasn’t always met with enthusiasm.

“The reactions to me saying I’m vegan in the ’hood is something I’ve learned not to take personally,” she said, “because veganism can be expensive. And in places where vegetables don’t grow and folks rely on meat and milk, paying $14 for a bag a grapes is just not an option.”

The collective spreads the word online and at events, as well as through what Ms. Quichiz calls “the old-fashioned way”: printing homemade fliers and passing them around. When it comes to creating a new chapter, anyone can contact the group through its website.

There are benefits to a vegan diet, even if it is not 100 percent of the time

Not everyone can manage to be completely plant-based all the time, because of finances, health or other limitations. “A lot of people militarize veganism, and it’s important not to do that,” Ms. Quichiz said. “You have to figure out what it means for you.”

That can include where you shop, what you wear, how you recycle and what you buy.

“When we talk about access — whether it’s fast fashion or fast food — even though I’m rooting for you to buy that $5 shirt because it’s affordable, you have to be conscious of why it’s so cheap,” Ms. Quichiz said. “Thinking about those things are the first step.”

This Creamy Chickpea Pasta Will Win You Over

Fondue Is Just the Beginning

A Sprawling Menu and Goan Cuisine at Cardamom in Queens