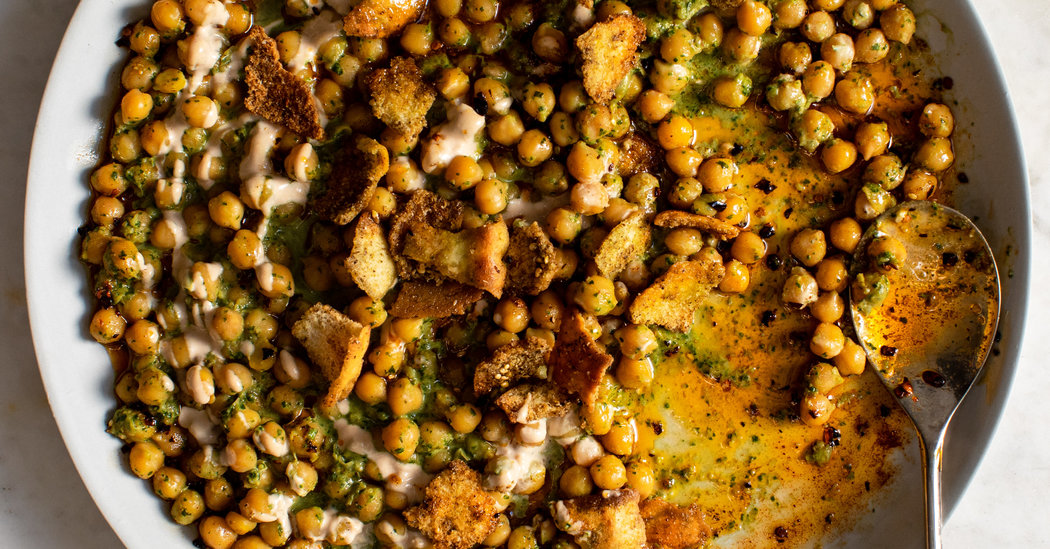 LONDON — In the process of making sure that bread, one of the most popular but also most perishable staples, doesn’t end up in the trash heap, cuisines the world over have used every tool at their disposal to find delicious recycling options.

The famous British love of desserts, to mention an example close to my heart, has given us bread-and-butter pudding (a pillow of warmth and steamy comfort), apple charlotte and summer pudding (semispheres of sweet soaked bread enveloping cooked seasonal fruit) and treacle tart (a tart filled with molasses and bread crumbs). For Brits, dairy, fruit and a spoonful of sugar help a slice of white bread go down in a particularly delightful way, especially when there’s an extra jug of fresh custard in the vicinity.

In southern Europe, on the other hand, yesterday’s bread doesn’t come into its own bloated with sweetened milk or cream but, rather, upon sucking up considerable amounts of olive oil, vinegar and the juice of a fresh tomato … or three. Spanish pan con tomate (bread rubbed with tomato, drizzled with olive oil and sprinkled of salt) and Italian pappa al pomodoro (a Tuscan soup) and panzanella (a chopped salad) are the more recognizable dishes among many.

In the Middle East, the equivalent of panzanella is fattoush, a salad peppered with fried pieces of flatbread called khubz. The name “fattoush” comes from the Arabic verb “fatt,” which means to break up or crush, referring to the pieces of broken bread in the salad. The word is also the origin of an even more exciting Arabic dish using stale flatbread, and that is fatteh.

Fatteh is difficult to define because there are countless regional versions. What they all have in common, though, is the layering of distinct elements, one of which is bread, onto a platter. In vegetarian variations like mine, the lamb is left out. I also chose to go a little less traditional and place the bread on top, rather than on the bottom, to keep it more crispy.

Other traditional versions might include yogurt or tahini. Fattet djaj, for instance, has bread in it, shredded chicken, whole chickpeas, broth, a layer of yogurt sauce and a topping of pine nuts. In Gaza, a thin flatbread called saj or makouk is dipped in stock, which is often loaded with garlic, lemon and chiles, and topped with freshly cooked white rice and toasted nuts. It is then finished off with cooked chicken or other meats.

The list of ingredients that could go into a fatteh — from eggplant, to broad beans, to tomatoes, to different pulses, meat or fish — can be as lengthy as your imagination allows. Just as long as there’s enough delicious juice to soak up, an old piece of bread could be the best excuse you’ll ever have for a little rummage around your kitchen cupboard or fridge in pursuit of a seriously multilayered feast.

With these pungent, tangy flavors you will want an incisive white that refreshes but does not intrude. That means lively acidity and freshness, which leaves many choices. If you’d like a sauvignon blanc, I’d steer toward a lean and herbal style rather than tropical fruity. Grüner veltliner from Austria would work well, though the same advice holds. Unoaked chardonnays from Burgundy could be delicious, like those from the Mâconnais or village-level Chablis. You can range far with these wines. Assyrtiko from Santorini or vermentinu from Corsica would both go well. If you don’t mind rosé in cold weather, it would be great, as long as it’s dry. If you like regional pairings, try a white or rosé from Lebanon or Israel. Prefer a red? Beaujolais often works with dishes suited for white wines. ERIC ASIMOV

Optimum Nutrition Opti-Men Review (What Can It Do For You?)