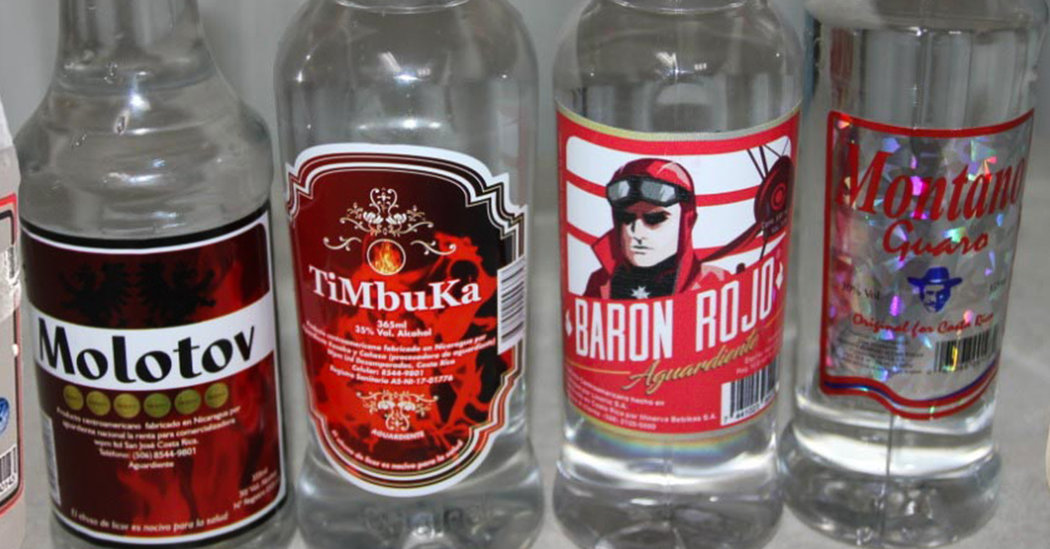 Nineteen people in Costa Rica died from tainted alcohol over the past two months, according to health officials, who have issued a national alert and confiscated around 30,000 bottles of alcohol.

The deaths in June and July span the country, and most likely were caused by methanol poisoning, according to a statement the country’s health ministry issued on Friday. At least six brands of high alcohol content liquors are known to have been confiscated.

At least four people were treated for methanol poisoning in a hospital in San Jose, the capital, and suffered from irreversible blindness and tremors, according to The Tico Times, a Costa Rican newspaper.

President Carlos Alvarado Quesada said Friday on Twitter that he was sorry to hear about the deaths and that he had instructed authorities to figure out who was responsible.

The confiscated brands include Guaro Montano, Guaro Gran Apache, Star Welsh, Aguardiente Barón Rojo, Aguardiente Timbuka and Aguardiente Molotov, according to the health ministry. The agency recommended that people avoid selling or consuming any of these brands until the alert has been lifted.

The victims included 14 men and five women between the ages of 32 and 72, according to the health ministry. Most of the deaths occurred near or in the capital: Seven people died in San Jose; four in Cartago, a smaller city about 16 miles east; and one in Heredia, about six miles north. But the issue reached coastal areas as well. Three deaths occurred in the western region of Limón and two in the eastern region of Guanacaste.

Methanol poisoning typically occurs through the consumption of counterfeit or improperly produced alcohol products. The specific cause of this outbreak was not yet clear, but such problems sometimes arise when properly branded bottles of liquor are refilled and resold with cheaply produced bootleg liquor.

While processing alcohol, methanol is naturally produced, said Dr. George Koob, the director of the National Institute on Alcohol Abuse and Alcoholism. Commercial alcohol manufacturers then remove it before bottling. The problems emerge when alcohol is distilled at home or on the black market without building in a system for removing the methanol. Low levels of the sort found in a home-brewed beer are not likely to be harmful, he said. But the high levels present in hard liquors can be deadly.

Identifying methanol poisoning can be challenging because the symptoms may closely resemble intoxication at first — and they do not show up until the methanol has been metabolized, often as long as 14 to 18 hours later. Drowsiness, lack of inhibition, vomiting, vertigo, a severe headache and abdominal pain are common signs, according to the World Health Organization. Hyperventilation, breathlessness, vision issues and convulsions may follow. In severe cases, the patient can fall into a coma or be left irreversibly blind.

“If you suspect you have more than a regular hangover, you may want to get the hospital as fast as possible,” said Dr. Koob.

In some methanol outbreaks, fatality rates have been as high as 30 percent, with as many as 800 deaths, according to the World Health Organization. In the past decade, outbreaks have hit Cambodia, the Czech Republic, Ecuador, Estonia, India, Indonesia, Kenya, Libya, Nicaragua, Norway, Pakistan, Turkey and Uganda.

Nearly 20 percent of alcohol sales in Costa Rica and nearly 30 percent of those in the Dominican Republic involve illicit alcohol, according to a report by the International Alliance for Responsible Drinking. Figuring out which alcohol has been improperly produced is not always straightforward, the report states. One hint in the recent outbreak was the cost of the product, according to La Nación, a Costa Rican newspaper. Most of the affected products cost around $1.74 a bottle.

In SoHo, Fresh Fruits and the Tarts They Inspire

In SoHo, Fresh Fruits and the Tarts They Inspire