A Seafood Pie for the Feast 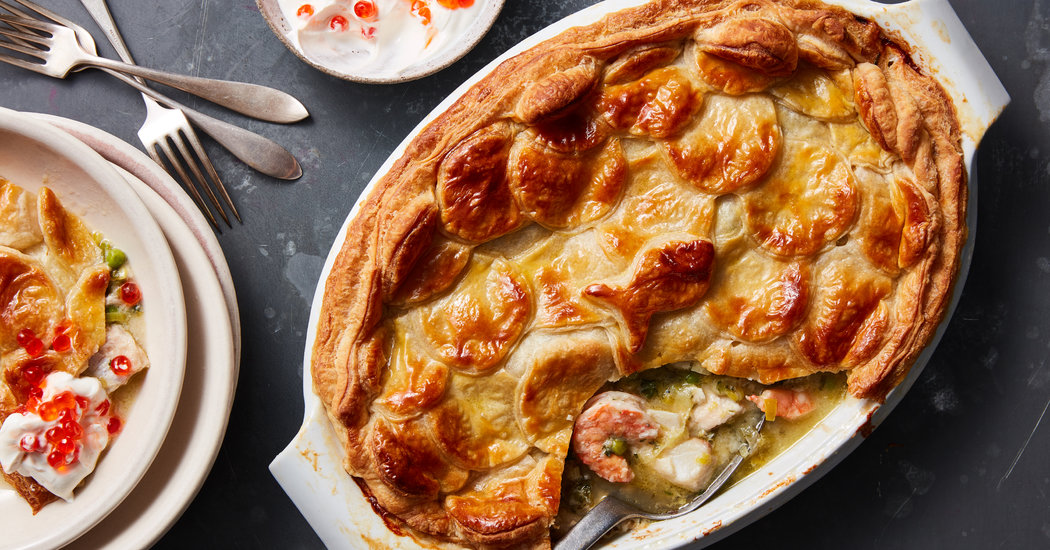 A fish pie, creamy on the bottom, covered in mashed potatoes on top, is a classic cold weather staple across the British Isles. Like its meaty cousin, shepherd’s pie, it has a cozy appeal as inviting as a fluffy rug next to the fire. But filled with seafood rather than lamb, a fish pie makes for a much lighter meal.

Diana Henry, the London-based food writer whose latest book, “From The Oven To The Table” (Mitchell Beazley, 2019) celebrates the joys of homey one-pan meals, calls fish pie the ultimate in comfort food in Britain.

“Here it is regarded a bit like crumble,” she said, referring to the dessert. “There is always a sigh of contentment as you put fish pie on the table.”

This version — a perfect centerpiece for a blowout holiday meal — is a little more elegant than most. Instead of mashed potatoes, it’s topped with a buttery puff pastry crust that turns delicately golden as it bakes.

I recommend buying the puff pastry dough. As delightful and company-worthy as fish pie is, even the fanciest ones don’t require the fussiness of a homemade laminated dough. Do find a puff pastry brand that uses butter instead of shortening because you can really taste the difference. Or use your favorite pie crust recipe instead. Pie dough may not puff up, but it will taste wonderfully rich, giving you handmade crust bragging rights.

I created this pie with Christmas Eve in mind, as a fun challenge for the Italian-American celebration Feast of the Seven Fishes. Using a total of seven fish was one of my goals (and if you count the clam juice and the optional caviar garnish, I just made it). That said, the pie will be just as festive with four or five different kinds of seafood, so don’t let a meager selection at your supermarket deter you. It’s really the scallops and shrimp that take the pie up a notch, so do try to include them.

Then, feel free to use whatever kinds of mild, firm chunks of fish you can get. Pacific cod and wild Alaskan pollock are two sustainable choices. Sometimes you’ll find them frozen, in chunks, and those are perfectly fine. Just thaw them before adding to the sauce.

You can make the filling for the pie the day before baking it, and even roll out the pastry then, too. But eat it right after cooking. That’s when the pie is at its most glorious, served straight from the oven, fragrant and warm.

A Festive Cake With a Big Reveal