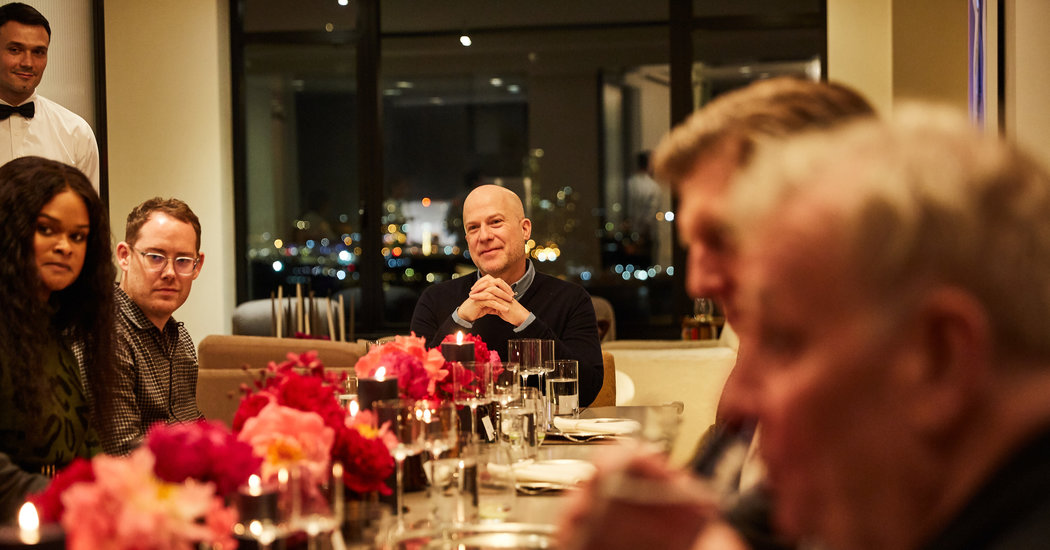 It’s tempting to call the author Richie Jackson’s new book, “Gay Like Me,” a memoir or an epistolary — but it’s really a manifesto, a 156-page letter from a gay 54-year-old father to his gay 19-year-old son, Jackson Wong, about what it meant to be gay when the writer was young in New York and what it means to be gay now. In that way, the work is a magnanimous gesture of generational transference: a cheat sheet on queer history; a lecture about safe sex; a call to get angry, harness one’s otherness and ultimately claim individuality. But it’s also one man’s personal history, a timeline of decades spent pursuing fatherhood as well his (nonbiological) L.G.B.T.Q. family at large.

That the author’s eldest son is gay was both unexpected (as such news usually is), and a catalyst for Jackson, who spent his career as a television, film and theatrical producer, to finally commit to paper his thoughts and wisdom: “When I rejoiced that you were gay, I was really wishing for the good parts — the community, the camaraderie, the creativity. The incredible beings who populate our community, who against all odds are themselves,” he writes. “But you can’t be gay with just the good parts: Your life daily will be touched by all the difficult parts, too. The fight, the struggle, the challenges, will make it even more valuable, even more worthy.”

Ultimately, Jackson says, he wanted to write the book that he felt he needed when he was growing up, back when he looked to late-20th-century memoirists, essayists and fiction writers to “learn how to be gay.” So to celebrate the book’s launch, and his own entrance into this lineage of queer authorship, Jackson and his husband, the theater producer Jordan Roth, recently hosted a dinner party at their West Village apartment, gathering some of their favorite contemporary L.G.B.T.Q. writers for conversation over a relaxed meal. It was a broad, varied group, a room full of thinkers who’d followed each other’s work but rarely met in person, from the eminent author Edmund White to the playwright Matthew Lopez to the memoirist and screenwriter Thomas Page McBee. Some guests, like Camille Perri and Raquel Willis, had started their careers in journalism and were now branching out, while others, like Lane Moore and Michael Arceneaux, had published books of essays that were as personal as Jackson’s, whose editor, Jonathan Burnham (the president and publisher of the Harper division of HarperCollins), was in attendance with his boyfriend, Scott Rothkopf, the chief curator at the Whitney Museum of American Art.

Both Jackson and Roth, who is increasingly a fixture on the international fashion circuit, often host guests in their home — they have a system in place, down to the catering and stemware and elegant corner dining table. But the added joy of this night came from shining a brighter light on Jackson and his literary accomplishments: “Now that my book is out, I’m learning how to walk in the world in a completely new way,” Jackson says. “Sometimes I feel reborn.” As the dozen guests milled about, discussing the imperiled state of L.G.B.T.Q.-focused media or regaling White with tales of contemporary gay sex (the children were not in attendance), it became clear that the evening was also a kind of salon, a throwback to an era when gay people gathered exclusively among one another to celebrate and get mad and express their true selves. “When I first got to New York in 1983, you would find yourself in spaces where you were around only gay people,” Jackson says. With assimilation and progress, of course, those sorts of safe spaces have become less customary or necessary. And yet to create your own majority, in a beautiful home over a delicious meal, no less, remains an empowering and vital act of generosity. “It’s obvious,” Jackson adds. “You have to get your gay stories from gay writers.” Here’s how the night came together.

Roth and Jackson like to invite a group of people over “just because it’s Thursday night — or who don’t know each other, or who have no reason to find each other at the same table,” Jackson says, which necessitates building in extra time at the beginning of the party to welcome everyone, extend introductions and allow people to get comfortable with each other in their corner living room, where through the wide windows you can see the city’s lights glinting off the Hudson River. On this particular occasion, guests spent much of the evening configuring themselves in small groups, weaving between each other: White and Lopez discussed the legacy of AIDS, Roth and Willis complimented each other’s looks, Perri and McBee compared notes about Hollywood. Inviting everyone to socialize before sitting around the table meant that the dinner itself felt like a continuation, rather than the inception, of a sprawling conversation.

Go Family-Style, but on the Side

The table was arrayed, simply, with Calvin Klein glassware and plates and flatware from the Italian company Match. However, Jackson and Roth prefer to present their meals, which are prepared by their own culinary team, nonchalantly in a banquet-like spread on the nearby sidebar. This approach to family-style dining limits clutter and prevents the food from being the sole focus of a meal, letting human interaction take center stage. It also allowed guests to follow their own dietary restrictions and preferences with minimal fuss, as everyone created their own colorful plates of, say, citrus-glazed salmon — “I would date this salmon,” Willis joked — or Spanish-spiced chicken, farro with porcini mushrooms, shawarma-roasted purple cauliflower and mixed greens crowned with edible flowers. “We always do buffet because we feel it’s more casual,” Jackson says. “We want it to feel not so stodgy.”

Though a pastry chef baked a few treats to celebrate the release of Jackson’s book — including a seven-layer cake with fresh raspberries, plus a chocolate-and-orange layer cake and white chocolate torte that were both vegan and gluten-free — the couple typically ends such parties with a bounty of their favorite baked goods from a rotating roster of iconic New York bakeries and chocolatiers. For this one, they brought in chewy chocolate chip and dark-chocolate “explosion” cookies from Mah Ze Dahr bakery in the West Village, plus double-chocolate gluten-free pecan cookies from the famed Dominique Ansel, whose shop is also nearby. Guests couldn’t stop passing around the cakes and cookie plates — proof that, sometimes, it’s better to leave a few key details in the hands of pros.

Decorate With Proportions in Mind

“Our entire dining room, which Jordan created, is designed to encourage intimate conversations,” Jackson says. The custom table in polished concrete is longer and narrower than is typical so that people can form intimate groups and actually hear each other — its dimensions and gray color evoke a New York City sidewalk. The chairs are vintage Steiner, but reupholstered in a sumptuous-but-comfortable Castel “teddy bear” fabric. Flowers are nonnegotiable, of course, but this night’s arrangements — peony and orchid varieties in red and pink (the hues of which matched Roth’s sweater), clustered in small bunches in amber apothecary bottles by the florist Frank Fiore — were a reminder that a single, low line of blooms adds visual interest without being a distraction.

Switch Up the Seating

For dinner, guests were assigned places via simple name cards; the hosts separated themselves and made interesting calculations about who should sit next to whom. Though Jackson and Roth were at opposing ends, their final party trick was to swap seats halfway through the meal, which provided an unexpected jolt of energy to conversation that was, perhaps, lagging a bit between bites of food. It’s a dead-simple, foolproof idea to steal: “Did you notice, after the dinner, nobody got up from the table?” Jackson recalls. “Everybody stuck around and kept talking — perhaps because it was so fun to watch Edmund White hold court.”