Inside the Pizza Convention, the Cheesiest Event in Atlantic City 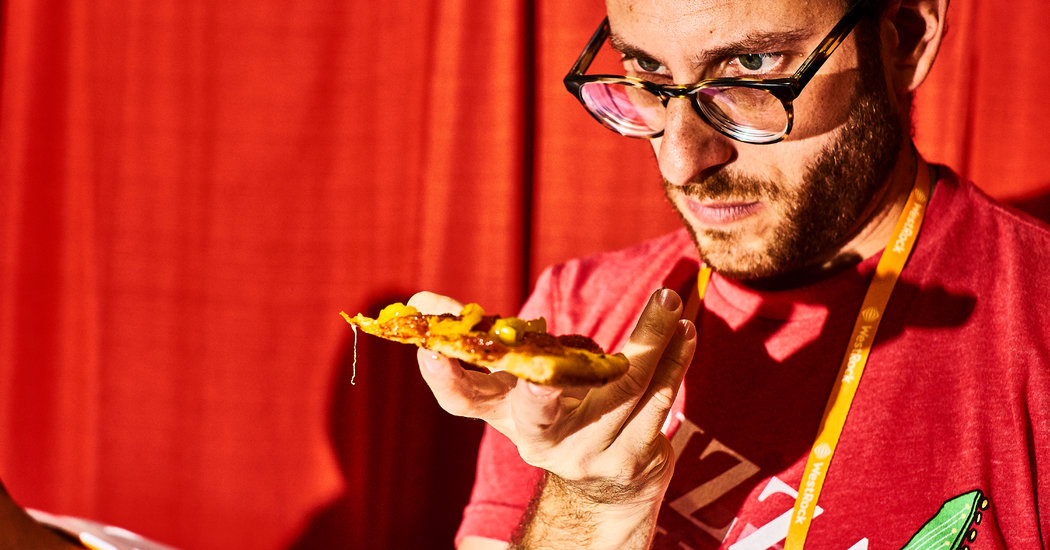 Early one morning last month, Scott Wiener pressed his face up to a slice of pizza and inhaled. He held it aloft, checking its floppy bottom — “looking under the hood” is what he calls this well-practiced move — then daintily tore off a puffy pinch of crust.

Mr. Wiener, a Pizza Today magazine columnist and the owner of a Brooklyn-based pizza tour company, was secreted away in a back room of the Atlantic City Convention Center, judging pies in late September at the Pizza & Pasta Northeast trade show.

“White Cheddar?” he wondered aloud after a bite, while his fellow judges checked the ingredient list on a handwritten note card supplied by the contestant. He was right.

Mr. Wiener takes his duties seriously. Like the rest of the judges, he lives, breathes and believes in pizza. He was among his people: pizza people, who can toss dough acrobatically, drop technical terms like cornicione — it’s the edge of the crust — and wear shoes printed with pepperonis.

They also wear pizza-spangled socks, neon-colored pizza-covered pants, and sew-on patches of melting slices with a dagger through the middle, and all manner of tattoos: chubby-cheeked pizza-makers tossing dough, psychedelic slices, and at least one heart ribboned with the slogan “pizza for life.”

Mr. Wiener, who also holds the Guinness World Record for the number of pizza boxes in a collection (595 and counting), is kind of the mayor of New York City pizza people, who had gathered at what is a smaller, regional offshoot of the annual International Pizza Expo in Las Vegas.

Both are the rare conferences where standard convention characters, like call center salesmen and quote-unquote booth babes, cross paths with hundreds of food nerds who can all recite from “The Pizza Bible.”

“I call it Jesus camp,” said Jenny Bello, referring to the religious vibe of the pizza shows, which she attends regularly. Along with her husband, Mark, she runs the nine-year old Pizza School NYC on Grand Street on the Lower East Side.

The Bellos were actually married in a ceremony officiated by Mr. Wiener, and all three are now seasoned pizza show veterans who tend to take the newbies under their wings.

That included a guy who looked like a bike messenger named Ben Stix. He represented the Nashville-based vegan meat company, the Be-Hive, and was walking the floor with a sack of faux pepperoni samples. The Bellos made him offer one to John Arena, an elder statesman of the pizza world and a member of the World Pizza Champions team, which is why he was dressed in a bowling jersey with his name on the back.

“It tastes like pastrami,” said Mr. Arena. It was mostly a compliment.

Mr. Stix and Mr. Arena had been hanging out near the booth run by Mike Kurtz, who makes a hit pizza topping called Mike’s Hot Honey. Mr. Kurtz, who is also pretty good at making pizza world connections, perfected his product working at Paulie Gee’s pizza in Brooklyn, where he still occasionally picks up a shift.

“This is our community,” Mr. Kurtz said. “I see friends of mine, customers of mine.”

Mr. Kurtz was dressed head-to-toe in burgundy, the same color as the hot honey he sells. His outfit also includes a bomber jacket for a shtick he developed involving the George Steinbrenner character from “Seinfeld” and the idea that everyone is trying to steal his recipe. Or something like that.

Mr. Kurtz had stepped out of his booth to talk to Angelo Womack, a co-founder of what is described as a “pizza lifestyle brand” called Rad Times Pizza, and Serhan Ayhan, whose family owns the confusingly named Boston Pizza in Queens.

“This is like pizza family all around,” said Mr. Ayhan, who hosts a Detroit pizza-style pop-up at his actual family’s Greek-style pizza shop in Astoria, Queens.

One easy way for a newcomer to join the family is to place in the competitions.

“If you score high, you can go from a relatively unknown to a star,” said Vincent Rotolo, a native New Yorker and former competitor who now runs Good Pie, his Las Vegas pizzeria.

Mr. Rotolo was there in part to support his “legacy,” as he calls the younger crop of pizzamakers. He had trained several taking part in this year’s contests.

Mr. Rotolo brightened as the judges’ results were about to be announced in the final minutes of Pizza and Pasta Northeast, and a crowd swelled toward the seven still hot ovens. “What’s beautiful is somebody’s life is about to be changed right now,” Mr. Rotolo said.

Like 33-year-old Vincent Gallagher, who just moved back to the East Coast after working in a San Francisco pizzeria. He came to the show alone, knowing no one, and won the competition for Neapolitan-style pies, one of the most difficult categories. He was now heading home to his wife with a $3,000 giant check, a pocket full of business cards, and a big gold trophy cup.

“We’ll drink tomato sauce out of it,” said Mr. Gallagher, who apologized to those gathered around him that he couldn’t stay in Atlantic City after the show to hang with the pizza people. He had a new puppy to take care of.

Mr. Wiener was also headed home. He had pizza duties. Just a few days later he’d be playing pizza mayor again at a fund-raiser he runs on behalf of Slice Out Hunger, which required ordering pies from more than 50 pizzerias.

What Was Kept in This Stone Age Meat Locker? Bone Marrow

Their Friends Come for Dinner — and Remake Their Home

Their Friends Come for Dinner — and Remake Their Home