Korean-Inspired Dishes at Umma by Noodlelove 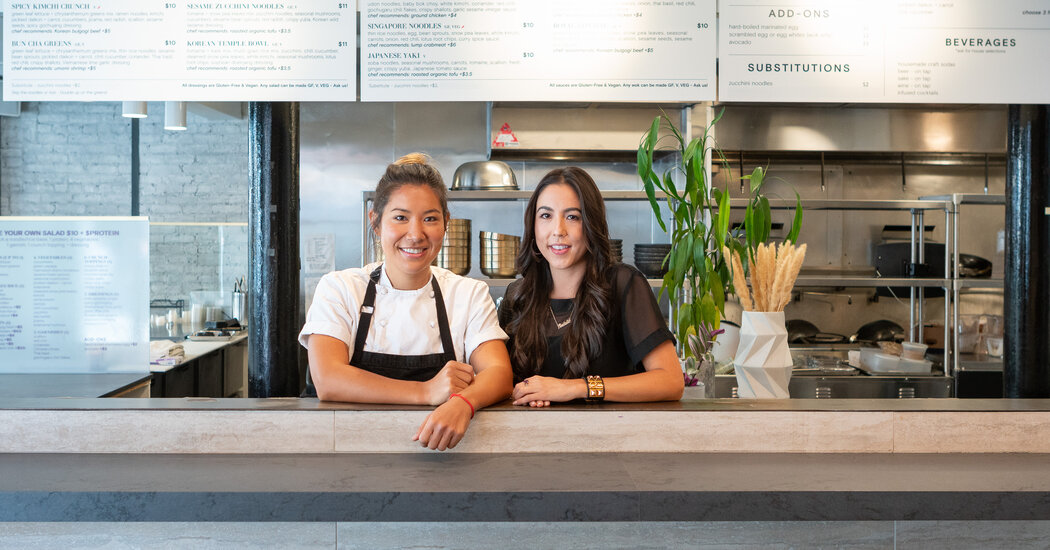 Natalie Camerino, whose family is Korean and Italian, traveled throughout Asia, and opened Noodlelove two years ago. The counter-service restaurant served bowls based mostly on noodles, with multiple add-ons. But now, with little of the lunchtime traffic that was her bread and butter, she’s going more formal with a sit-down restaurant. There are 24 seats outdoors, and another eight seats will be added when reduced-capacity indoor dining is permitted at the end of the month. She has also hired the chef Tabitha Yeh, who honed her skills at Per Se, Noma and Bar Masa, to create a Korean-inspired menu that skews toward comfort food. Umma translates from Korean as “mom.” Ms. Camerino said the goal was for the food to make people think of home, but to have a creative, modern twist. On the menu you’ll find Korean-style fried chicken in steamed buns, bulgogi cheeseburger dumplings with Wagyu beef and cheese sauce, bibimbap fried rice, ddukbokki rice cakes with glass noodles and vegetables, and Seoul alla vongole combining a clam sauce broth with wonton noodles, napa cabbage, scallions and gochugaru. The Noodlelove menu remains available for takeout and delivery. (Opens Wednesday)

The global dining excursion at Turnstyle Underground Market in the Columbus Circle subway station now includes paella. Though Turnstyle’s “official” reopening won’t happen until next week, this newcomer is already up and running. Alex del Gallego, whose family owned restaurants serving Spanish and Venezuelan fare in San Cristóbal, Venezuela, and his wife, Lorena, offer paella to go for one or to serve three or four ($10.95 to $35.95). They come in microwaveable plastic containers. The choices are vegetable, chicken, seafood, and land and sea with seafood and vegetables, and include proper saffron rice. Hearty salads, empanadas and skewers of chicken or shrimp are also served for eat in or to go.

It appears that one result of the pandemic is that a number of restaurants that closed are taking advantage of newly available real estate, reopening in new or expanded locations. Among them is this Guyanese and Caribbean restaurant specializing in Creole food. The original restaurant, in Georgetown, Guyana’s capital, dates from 1960. Clinton Urling, a son of the owner, opened a tiny branch in East Flatbush two years ago with his brother, Hubert Urling Jr. Now, after a pause, it has reopened in Crown Heights, in a larger space, allowing for an expanded menu that includes roti flatbreads and sweets, like milk fudge, along with its usual hearty stewlike soups and barbecue chicken. For now, there’s takeout and delivery. Indoor dining will be added starting Sept. 30.

This Chelsea Market establishment since 2015 has set up shop in DeKalb Market Hall with its partner, Ronnybrook Farm Dairy, serving American food with ingredients from nearby farms. Here, its specialties are fried chicken sandwiches and milkshakes.

The annual South Beach Wine and Food Festival held in February managed to slip in just under the wire, before any pandemic restrictions were announced. For the New York installment, from Oct. 2 to 11, the events will be mostly virtual. But there is a lineup of in-person dinners at restaurants from Oct. 6 to 11. Most are extremely limited, and festival organizers prefer to sell each table, which can seat from two to 10, to a single party. Around 30 restaurants, including Adda Indian Canteen, Rezdôra, Portale, Daniel and Gabriel Kreuther, are participating. The chef Gabrielle Hamilton is reopening Prune in the East Village, which closed early in the pandemic, just for this dinner, seating 10 at one table. Dinners are $200 to $500 per person, with proceeds benefiting the Food Bank for New York City and No Kid Hungry.

With Betony and Clocktower on his résumé, Mr. Logue, who studied and worked in Italy, is the new executive chef at Tribeca’s Kitchen, a diner-style restaurant that is undergoing an upgrade. The restaurant is owned by the family of Andreas Koutsoudakis Jr., who died of Covid-19 in March.

This Dublin native is the new executive chef at Alfie’s Bar & Kitchen in Hell’s Kitchen, where he’s turning out fish and chips, but mostly American fare.

5 Recipes That Are a Sure Thing in an Uncertain Time

A Dish That Reflects Our Nation: Okra Soup

A Dish That Reflects Our Nation: Okra Soup