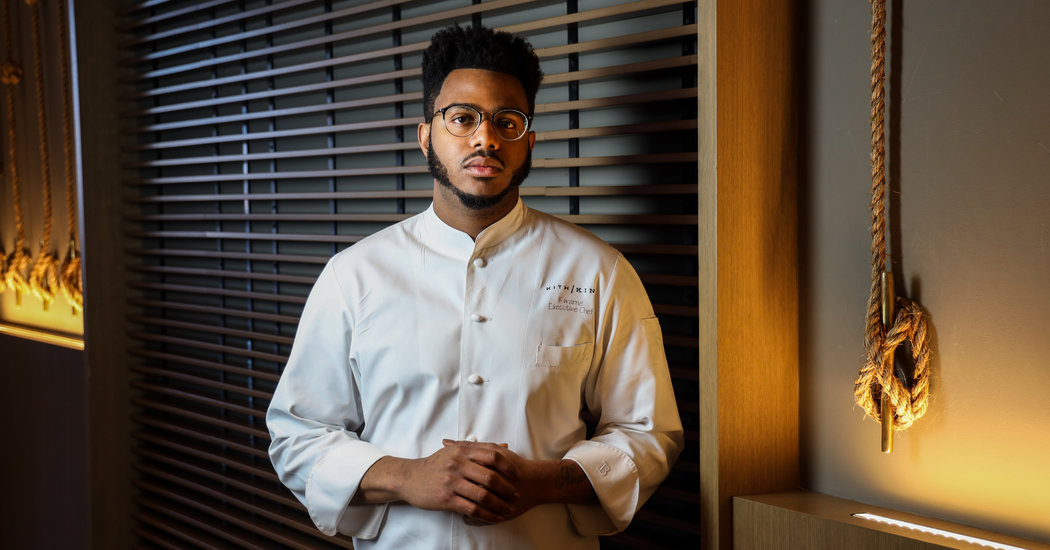 A month ago, the chef Kwame Onwuachi reopened Kith and Kin, the restaurant on the Potomac River in Washington where he established himself as a national talent and a leading voice for Black workers in the culinary profession.

Today, he said that he has resigned from the restaurant in order to seek an opportunity to work as a chef in a restaurant he owns himself.

“Something that profits off of Black and brown dollars should be Black-owned,” Mr. Onwuachi said. “It’s something that’s very, very important to me and something that I want to achieve in the future.”

The InterContinental Hotel Group, which operates Kith and Kin and the hotel in which it sits, the InterContinental Washington D.C. — The Wharf, is still operating the restaurant. “We are excited for the future of this innovative, landmark restaurant and look forward to sharing more details soon,” said James Ryan, general manager of the hotel, in a prepared statement.

Mr. Onwuachi said that his decision was not directly related to the pandemic. He said, though, that taking time off from Kith and Kin, which was closed from March until June, gave him time to think about what mattered to him. For three weeks in April, he returned to the Bronx, where he grew up, working with World Central Kitchen to prepare meals that were given away to Mott Haven residents and emergency medical workers.

“It was inspiring to cook for the community,” he said. “It wasn’t, ‘Oh the nuances, this curry doesn’t have enough anise seed in it.’ They were just like, ‘Thank you for this food.’”

He is not sure where his next restaurant will be located. But he is sure that wherever it is, he will be in the kitchen. “I’m going to cook, I was born to cook, I have to cook,” he said. “But I do need to take some time to think about how to build a better future. And I need ownership to do that.” He also hopes to resurrect Philly Wing Fry, two outposts of which closed in Washington after gaining some renown for their cheese steaks made from dry-aged rib-eye.

For Mr. Onwuachi, Kith and Kin was a chance to dust himself off after an earlier and more rarefied restaurant, the Shaw Bijou, failed less than three months into its run. At Kith and Kin, which opened in 2017, he changed gears. He imbued the menu with historical associations of slavery and the African diaspora, leaning more heavily on home-cooking traditions from West Africa, the Caribbean and New Orleans. When he accepted the Rising Star Chef of the Year award from the James Beard Foundation last year, he called himself “my ancestors’ wildest dreams.”

Esquire named Mr. Onwuachi the Chef of the Year in 2019 and placed Kith and Kin among the best new restaurants, even though the place was two years old by then. “Sometimes a great restaurant takes a while to hit its stride,” Jeff Gordinier, the magazine’s food and drinks editor, wrote.

That same year, Mr. Onwuachi published a memoir, “Notes From a Young Black Chef.” The book, which is being made into a movie, discussed racism in the hard-driving kitchens where Mr. Onwuachi had trained, provoking a conversation that has come to seem even more timely in the past few months.

Ms. Velez, who was nominated for the James Beard Foundation’s Rising Star Pastry Chef award this year, said that the pandemic and the ongoing protests about the killings of Black people in police custody had reordered some of her priorities.

“In our industry we are always typically fighting to keep the doors open,” she said. “Once the doors were blown off the hinges, I had time on my hands and was able to think things through.”

One of the things she thought through was her desire to “do things for the betterment of other people.” In June she and two other pastry chefs founded Bakers Against Racism, an “online virtual bake sale” to benefit organizations that try to help Black people and communities. So far, she said, the group had raised nearly $1.9 million. She said she felt that the owners of Maydan and Compass Rose were sympathetic to her career goals and her social aims.