Now Is the Time for American Sparkling Wines 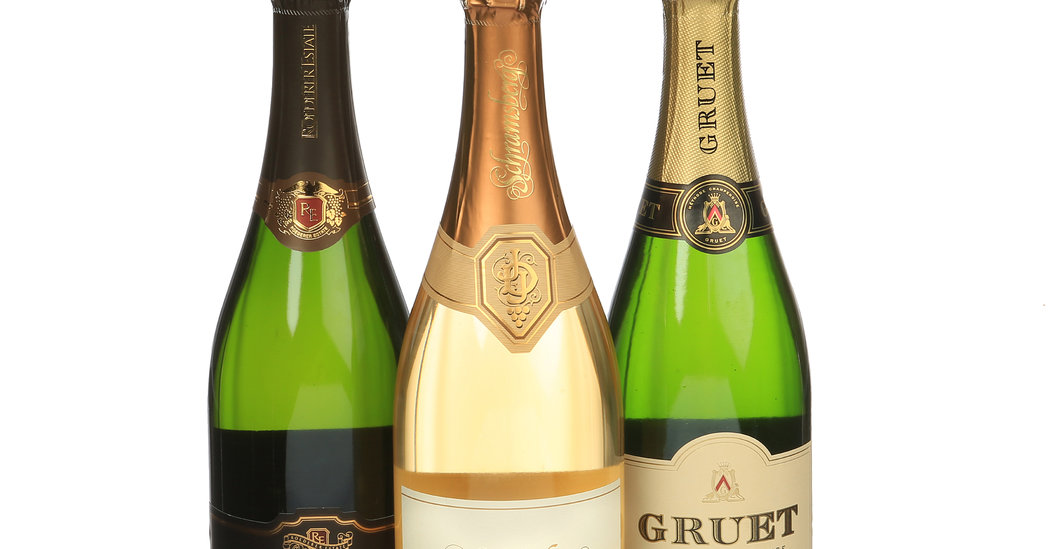 Almost every region in the world that produces still wine makes some form of sparkling wine as well. Given this bounty, why would consumers choose American sparkling wines?

One reader raised a similar point, wondering why, if sparkling wines from Europe are exempt from a recent 25 percent tariff, I had offered a lineup of three American bottles as our Wine School subject over the last month.

My initial thought was, “Well, why not?” But that seemed a little flip. The query leads to a deeper question: What do these American sparkling wines offer, if anything, that distinguishes them from the myriad others available?

Wine School is intended to explore these sorts of questions. We try the wines, compare them to others that we have consumed, determine whether they appeal to our taste and then finally place them on a mental map of desirability.

And isn’t that what we instinctually do anyway? You go to a movie, consider how you feel about it and debate it with friends and family. You compare the French fries at one restaurant with those of another.

Why should wine be different? Yet it often feels arcane and intimidating, as if an opinion can have no value unless one understands the intricacies of production, knows the soils in which the vines grow, can name the forest where the oak in the barrels was harvested.

These elements absolutely help to understand wine. But they are by no means essential to judging whether you like a wine.

With that in mind, my initial response to the reader’s question seems less flip and more common sense. Why wouldn’t you want to try these American sparkling wines? How can we make sense of them otherwise?

As I do each month, I suggested three bottles. The idea is for all of us to try the same wines. That’s sometimes not possible, so I suggest some other possibilities as substitutes.

To clarify, these suggestions are not recommendations. That is, I’m not saying these are the best examples, or that you ought to like them. That’s for you to decide for yourself.

The notion was to try bottles at different prices. Two of these bottles, the Roederer Estate and the Schramsberg, come from California. Gruet is based in New Mexico, but actually used grapes from four states — New Mexico, California, Oregon and Washington — in this inexpensive cuvée.

Many readers pointed out other possibilities, citing excellent sparkling wines from Oregon, New York, even Illinois and Michigan. Points taken, and may I add that I’ve had superb bottles from Maryland, Vermont and Massachusetts as well?

These wines may be subjects for us in the future, though some of the wines suggested are not easy to find outside of their production areas. But their existence bears out my earlier point: Wherever you find still wine produced, you are likely to find sparkling wine as well.

If you compare the sparkling wines from historic wine-producing areas, however, you will see an important difference. Wines like cava from Spain, sekt from Germany, the crémants from France, Prosecco and Lambrusco from Italy — all of these are traditionally made from local grapes rather than from the dominant trio of Champagne grapes, pinot noir, chardonnay and pinot meunier.

In the United States, a country without longstanding viticultural traditions, sparkling wine producers in the 20th century made the entrepreneurial decision to take Champagne as their model.

The more ambitious ones used the Champagne grapes and made their wine by the same method as Champagne. That is, they fermented the grapes into still wine, then refermented the wine by bottling it with yeast and a sweet solution. The carbon dioxide produced by this second fermentation, with no escape, carbonates the wine.

Less ambitious sparkling wine producers took the Champagne model as a marketing idea. They often substituted easier grapes to grow and cheaper production methods, but they called their wines Champagne.

A 2005 agreement between the United States and the European Union prohibits producers outside the Champagne region of France from calling their sparkling wines Champagne. But it grandfathered in a few longtime producers like Korbel, which continues to use the jarring term “California Champagne.”

Nowadays, as other forms of sparkling wine have become popular, particularly pétillant naturel, more American producers have broadened their repertory, and are now using many different grapes. But the most focused sparkling wine producers, including the three I suggested, still cling to the Champagne model.

One of them, Roederer Estate, as you might guess, is a sibling of Louis Roederer, a superb Champagne house. Another, Gruet, was founded in 1984 by émigrés from Champagne who envisioned the high desert region of New Mexico as a great place for making sparkling wines. The third, Schramsberg, was founded by Californians in 1965 with no connection to Champagne except a determination to make world-class Champagne-style sparklers, which nobody in California was doing back then.

Pouring a glass of the Gruet was a challenge. The bubbles were so lively the wine practically foamed out of the glass. Eventually it calmed down, and I could sense the yeasty, bready aroma. On the palate the wine had a pronounced anise flavor at first. With time in the glass a toasty flavor developed.

Over all, the Gruet was simple but pleasing. It had no flaws that stood out — it would be far preferable to the sort of industrial Proseccos served at gallery openings and receptions — but it lacked finesse.

The bubbles were inelegant, as several readers pointed out. Dan Barron of New York called them, “big, loud look-at-me bubbles.” With grapes coming from four different states, the Gruet is a product with no sense of place. Still, should you expect more for $15?

The Roederer Estate at $22 was a big step up and the bottle most reminiscent of Champagne. The bubbles were much finer, the mousse, to use the French term for the froth that forms on the wine when first poured, was much gentler. The flavors hinted at red fruits, flowers and herbs. All told, the wine was deep, long and elegant. All of its grapes come from the Anderson Valley of Mendocino County.

Where the Roederer Estate seemed classic, the Schramsberg at $35, by contrast, was the most idiosyncratic. It, too, had a gentler mousse and more elegant bubbles than the Gruet, and its texture was fine. But with flavors of red and dark fruits and herbs, it tasted at first like a sparkling pinot noir.

Perhaps that was appropriate as the wine is 81 percent pinot noir, and the rest chardonnay. With time in the glass, the flavors settled down, and its pronounced fruitiness faded to a background note. It became a touch savory and saline.

In some ways, the Schramsberg seemed the most Californian of the wines, if you measure that quality by its sunny fruit expression. It’s worth pointing out that the Schramsberg was the only vintage wine of the three. You would expect it to show the character of the 2015 vintage: warm and drought-ridden. The other bottles were blends of multiple vintages, which gives the winemakers greater control of the character of the wine.

There was little consensus among readers on which they liked best. Most appreciated the value of the Gruet, the elegance of the Roederer Estate and the distinctive personality of the Schramsberg.

Preferences, however, differed. Martin Schappeit of Forest, Va., described the Roederer as “more subtle, more introverted and to me the most Champagne-like of the three wines.” But Neighome of Manhattan said, “Roederer is like the nice but uninspiring friend that has impeccable manners, never says a word out of turn and can be trusted to behave appropriately at all times.”

So why American sparkling wines, to return to the original question?

For one thing, you cannot ignore the prices. American wines are rarely better values than their European counterparts (tariffs not withstanding), but these are far cheaper than most basic Champagnes, which start around $35 a bottle. Is the $22 Roederer Estate a better value than the $45 Louis Roederer Brut Premier, the company’s nonvintage Champagne? Why not taste them side by side?

I think the Schramsberg offers the most interesting answer. It’s simply a different style of sparkling wine, though made with the Champagne grapes and by the Champagne method. This is a sparkling wine of Northern California with a clear sense of place. You can like it, or not. But its distinctiveness justifies its existence.

The T List: What to Try, Read and Know About This Week