Park Slope, Brooklyn, Gets a Beer Garden Built Into a Garage 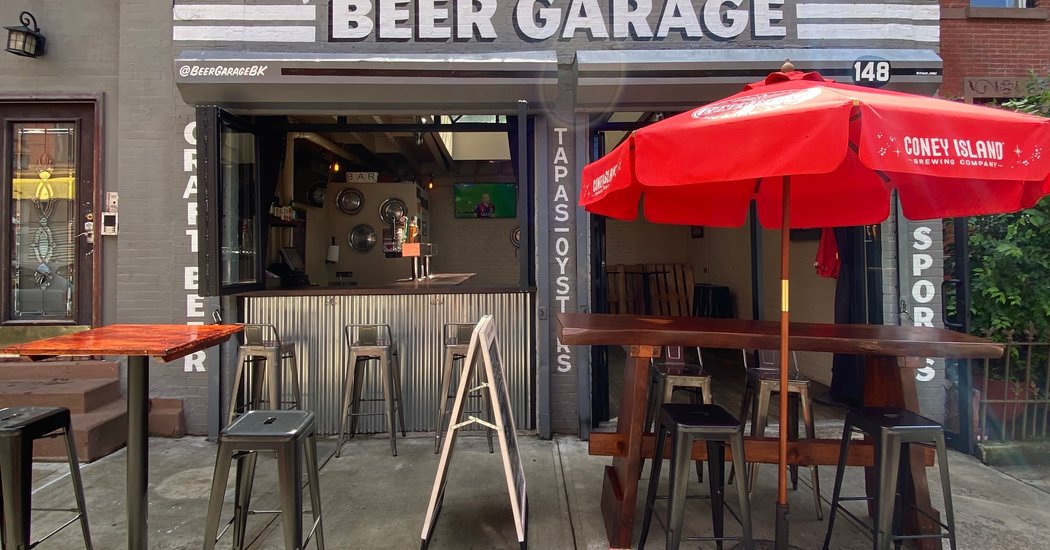 Marina Charny, the owner of Wild, a gluten-free Italian restaurant, planned to use a former garage she acquired next to her Park Slope location as a party room. But then she had another idea: a beer hall. She kept one roll-up door, and, for now, this spot is open with outdoor seating at socially distant high-top tables for about a dozen drinkers. She and her partner in this venture, Oleg Kaziev, offer 13 local craft beers on tap, and they’ll fill growlers. Wine, sangria and Prosecco are also poured. A raw bar and finger foods, like wings, fried calamari, guacamole, smoked ribs and pizza, are available. Once indoor dining is approved, there will be space for 50 at full capacity, about 25 well spaced.

Call it a mini-Intrepid. This small aircraft carrier (it was used for helicopters) is now parked at West Harlem Piers in Upper Manhattan. It’s ready to receive guests on its 4,000 square foot outdoor deck for crowd-pleasing food like burgers and lobster rolls and drinks like the spiked Steel Beach Lemonade. Michael Trenk, an owner of the Prohibition hangout on the Upper West Side, fixed the carrier up. There’s also a covered lower level which Covid-19 regulations prevent from opening. (Opens Thursday)

The plan was for this new restaurant to open for indoor dining this week. Not possible. So the owners, Key Kim and Mihyun Han of Kosaka in Greenwich Village, have pivoted to takeout and delivery, and have added 12 sidewalk seats. Hand rolls from the chef Sho Boo are the specialty. Done in beige and dark walnut and tucked behind a flower shop, the restaurant will eventually have a 22-seat sushi bar for a long list of maki rolls and a smaller omakase counter. But for now, the offerings are limited to four sets of four assorted sushi rolls, $20 to $25.

This restaurant, with the chef Marie-Aude Rose in the Roman and Williams Guild in SoHo, will have outdoor seating, shaded by umbrellas, into October. A terracelike platform extension runs along Mercer Street, with more tables on Howard Street, seating a generous total of 88 socially distant guests. That’s more than could be accommodated indoors in pre-pandemic times. Some new menu items include raw tuna in a vinaigrette, a merguez sausage sandwich and sautéed chicken with green beans and olive paste. Guests will also be able to order items from the Guild store to be delivered to their tables.

Daniel Boulud has long offered outdoor seating at several of his restaurants. Now, in compliance with the virus-control regulations, he has added it to his flagship, Daniel on the Upper East Side, for the first time. There are socially distant seats for about 35 diners along East 65th Street, most of them under the generous canopy. The menu is the same as his home-delivery menu at Daniel Boulud Kitchen, a service that began shortly after the lockdown rules went into effect. The outdoor tables are served from 5 to 9 p.m., Tuesdays through Saturdays, no reservations.

An outdoor restaurant modeled on an Austrian-style heurigen has been added to the Schaller & Weber portfolio. Jeremy Schaller has socially distant seating for 20 in an open-air area behind his Schaller’s Stube Sausage Bar. Charcuterie, cheeses, a speck sandwich, a Reuben pastrami sandwich, sorbets, beers and Austrian wines are on the menu. (Thursday)

Lucky are the restaurants on open-air rooftops. They’re ready for business, social distancing and all. This is a new one in the financial district from Michele Iuliano, the chef, and his wife, Anisa. It’s a third-floor gardenlike terrace with 4,500 square feet of space above the couple’s Gnoccheria Wall Street restaurant. In addition to the outdoor seating, there are tables for two in greenhouse enclosures. The menu features seafood in assorted panini, and also pizza, fried calamari and gnocchi. The entrance is on Bridge Street. (Wednesday)

Jungsik Gomtang Pop Up and Jungsik at Home

Jungsik, the elegant TriBeCa Korean restaurant, will branch out next year with a second restaurant at 151 West 30th Street. Called Jungsik Gomtang, it will serve beef broth with brisket and offal over rice or noodles. In the meantime, this pop-up will offer a sampling of the new place’s menu for pickup or delivery. Also available is the menu from Jungsik at Home, newly opened for takeout and delivery with a $45 tea and pastry box, $65 for a secret (chef’s choice) box and $75 for a celebration assortment of dishes. (Thursday)

There’s a new alternative to the sprawling indoor DeKalb Market Hall in Downtown Brooklyn: an outdoor market where a dozen of the hall’s food vendors are now stationed, Monday to Friday, through Oct. 7. And there’s more to come. Among the temptations are offerings from Katz’s Delicatessen, Jiangbing’s Chinese street food, Kotti Donor’s kebabs, Pierogi Boys dumplings and Likkle More Jerk for Caribbean jerk chicken. As part of the project, there’s Craft & Carry’s Beer Garden, with suds from local brewers and seats at socially distant tables, which are also open to people getting food from the market.

This Saturday and Sunday, this new agency to promote the diverse Queens restaurant scene has organized a food crawl in Elmhurst and Jackson Heights. Participants buy a guide for $20 that lists a dozen restaurants. The price supports the restaurants, local food pantries and more. Food is extra. There’s also an Instagram photo contest with restaurant gift certificates as prizes. Among the restaurants on the tour are Birria-Landia in Jackson Heights, and Tangra Masala and Lamoon in Elmhurst.

What began as a takeout- and delivery-only branch of the Major Food Group’s Manhattan restaurant a few months ago will open for socially distanced dining outdoors. The chefs, Mario Carbone and Rich Torrisi, are on hand. (Friday)

This Hudson Valley cidery will open its taproom and patio for indoor and outdoor drinking this week. Ciders on tap and by the bottle, and cider variations like mead, low-alcohol ciderkin and cyzer, a mead-like hybrid, will be sold. They also carry other New York State ciders, wines and beer, cheeses and other foods. (Friday)

The chef made her name at Chumley’s, then went on to a brief tenure as executive chef at Gotham Bar and Grill, which Pete Wells awarded three stars in a New York Times review. Now, she’s the chef-in-residence at the Mayflower Inn & Spa, Auberge Resorts Collection, an elegant country retreat in Washington, Conn., which was previously owned by Robert and Adriana Mnuchin. (Their son, Steven, is the treasury secretary.) Ms. Blamey, who will be on the job through Sept. 7, offers a garden menu in the dining room, $130 for three courses, Thursdays through Sundays. It features locally grown ingredients in preparations like Spanish mackerel with eggplant and white soy. The Tap Room menu will include a burger, for which Ms. Blamey earned praise at Chumley’s. Both restaurants are operating at 50 percent capacity and also have outdoor seating.