Rioja Gran Reserva, a Wine Beginning to Be Shaped by Time 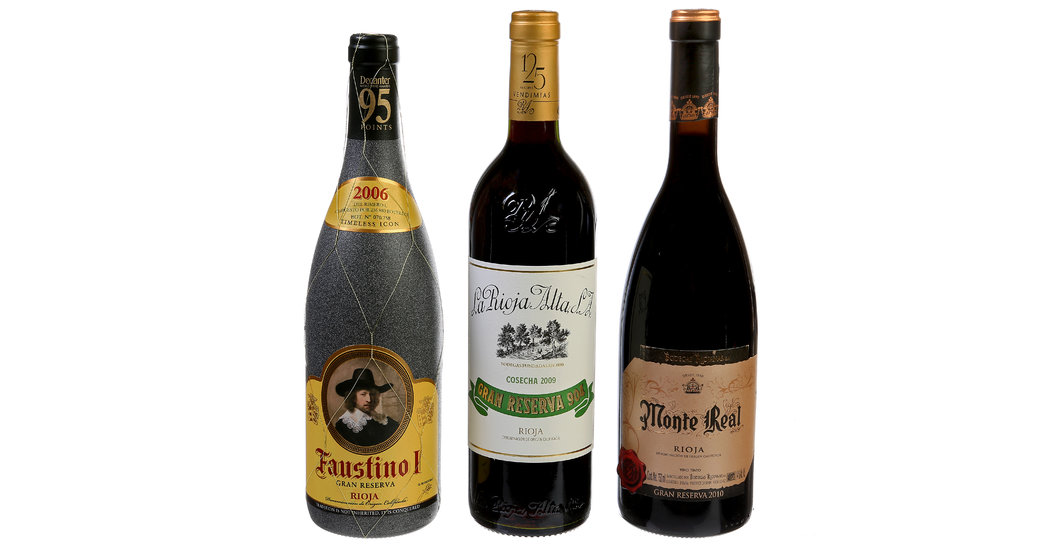 It’s been widely accepted in the wine world for years that people can no longer be expected to age wines as they might have half a century ago.

For one thing, the wine-drinking public has changed enormously. Where once the market for wines that aged along glorious arcs was small, wealthy and dynastic, interest in wine today has become far more democratic.

Wine lovers no longer necessarily have cellars or the means or space to construct one. Those who would enjoy drinking age-worthy wines are much more likely to live in fourth-floor walk-up apartments in Brooklyn or Tokyo than they are to occupy stately manors.

An adage had it that you drank wine cellared by your parents, and bought wine for your children. But those “Downton Abbey” days are long gone.

So much else has changed, too. Restaurants could once be relied on to hold bottles in their own cellars until the wines were ready. Now, sommeliers must rush them to the wine list as soon as they are purchased, as they cannot risk delayed returns on their investments.

The world is awash in fascinating wines that require little or no aging at all. While many of these wines have ancient origins, their appearance in the global economy is relatively recent. And they are generally much less expensive than bottles for aging.

Confronted with these new realities, many producers of age-worthy wines changed their thinking. Rather than advise consumers to wait 10 years until they opened, say, a good Bordeaux, as was the old custom, they have altered their methods of production in an effort to make wines that can be enjoyed younger, that are no longer as tannic, astringent or impenetrable as they once were.

Here at Wine School, we understand that the world changes. Wine is different than it was in the mid-20th century, and generally for the better. Even so, getting to know aged wines is a crucial step, if only to understand how aging affects wine.

For that, it’s worth tasting wines at all levels of aging, from young through adolescence and middle age to doughty senescence. This is by no means easy or inexpensive, though certainly possible with long-term planning.

Even though many wines that once demanded aging — whether Bordeaux, Barolo, Napa cabernet sauvignon or Burgundy — can now be consumed younger, these wines still benefit from additional aging. Some that we have tried in Wine School, like Pomerol and Bandol, would certainly have been better with a few more years under their corks.

One category, however, tries to make life easier for all lovers of aged wine. That would be our subject over the last month, Rioja Gran Reserva, in which the rules of the appellation require that wines be aged at least five years by the producers before they can hit the market. Many are even older than that by the time they are sold.

This system of equating quality with age is out of step with current thinking that the potential of a wine is more a function of the distinctiveness of its terroir.

Within Rioja, a debate over this point drags on. More than a few producers no longer employ the official terms indicating a wine’s aging before release, like crianza (three years), reserva (four years) and gran reserva.

Instead, some label wines simply by their provenance, as is now the custom in so many other parts of the world. Since these wines generally don’t use label terminology like gran reserva, they are not bound to age the wines before sale, so they don’t.

At Wine School, we are sympathetic to arguments in favor of terroir. Yet we also cherish traditional styles. And we are grateful that some of the greatest Rioja producers, like R. Lopéz de Heredia, are simultaneously traditional and progressive. Lopéz ages its gran reservas longer than any other producer before they are sold, but these wines are also identified as products of single vineyards.

Even with the presale aging in the cellars of the producers, these wines, still seemed relatively young. Yes, they can all be consumed with pleasure now, but their potential will not have been explored. Even gran reservas are generally purchased with the idea of aging them further.

So why are we opening these bottles now?

Well, for the purposes of Wine School, they are at least a little older, the Faustino I more so than the others. And they convey a notion of what can happen early in the aging process.

They all share one characteristic that I love in gran reservas: a mellow, cushioned texture and flavor. That is, rather than the firm, possibly rugged, astringent tannins from grape and oak that you might sense in younger, age-worthy wines, the tannins in these wines feel as if they’ve been sanded down by time to a softer, more comfortable state.

In general, I don’t much like the overt presence of oak in any wine, whether the darker tones of French oak, as is often encountered in more modern expressions of Rioja, or the paler, more herbal American oak, which is more typical of old-school Riojas.

But American oak seems to meld seamlessly with the fruit of traditional Riojas, which primarily comes from the tempranillo grape, often augmented by graciano, mazuelo or garnacha. Those last two grapes are better known to Americans by their French names, carignan and grenache.

This combination of grapes, oak and age gives gran reservas their characteristic burnished feeling, like a comfortable old leather chair in a warmly lighted, wood-paneled room.

The 2010 Monte Real, the youngest of the three wines, was 100 percent tempranillo. It was medium-bodied and not particularly concentrated, though its spicy, herbal flavors lingered in the mouth, as did its tannins. I liked its grace, and imagine it will develop complexity, but it did not strike me as a wine that would improve for decades.

The 2009 La Rioja Alta 904, 90 percent tempranillo and 10 percent graciano, was likewise spicy and herbal, with a soft fruit flavor, yet it had more concentration, complexity and intensity, with an underlying earthiness. This was a lovely wine now, but I think it will get much more interesting over the next 20 years.

The 2006 Faustino I — 86 percent tempranillo, 9 percent graciano and 5 percent mazuelo — was the oldest of the three. Judging by the color of the wine, just beginning to fade around the edges from ruby to brick, it was, not surprisingly, the most evolved.

Its tannins were still wound up, but the aroma was getting interesting, spicy with dried flowers and balsam. On the palate, it had the mellow fruit-and-oak combination I love, with a tobacco, mineral component as well.

I have to say, the opaque, frosted Faustino I bottle with the Rembrandt label is kind of strange. “Timeless Icon,” the label reads, which seems a little egotistic for an understated wine. Further down is a motto, “Tradition Is Not Inherited, It Is Conquered,” which seems like the sort of nonsense a pro wrestler would scream: “Can you smell what Faustino I is cooking?”

I decanted each of these wines and drank them over the prolonged course of four days, just to see what would happen. They all improved, a further indication that these were still young, sturdy wines. Readers who likewise decanted, even if they did not follow the wines for as long, also saw improvement.

Although her wine was a 2010 reserva, not a gran reserva, Martina Mirandola Mullen of New York found decanting was beneficial. Before decanting, she described the wine as “the definition of ‘in your face.’ ” After 24 hours in a decanter, she said, “The wine is now like Grace Kelly or Audrey Hepburn, not overstated but dazzling.”

Some were not enamored with the Riojas, but most readers liked them.

“If good wines are meant to be transporting this one worked,” said Peter of Philadelphia, who drank a 2010 904. “I felt like I should be sitting [in] a wood paneled room with animal heads on the wall.”

My favorite comment, though, came from Giuseppe of Boston, who said he was now 81 and proudly kept an empty 1981 Muga gran reserva on a shelf next to some other cherished old bottles.

They bring back great memories, he said, and concluded, “Aging is a wonderful trip for both wine and life.”

Banh Mi That Travels the World at JoJu