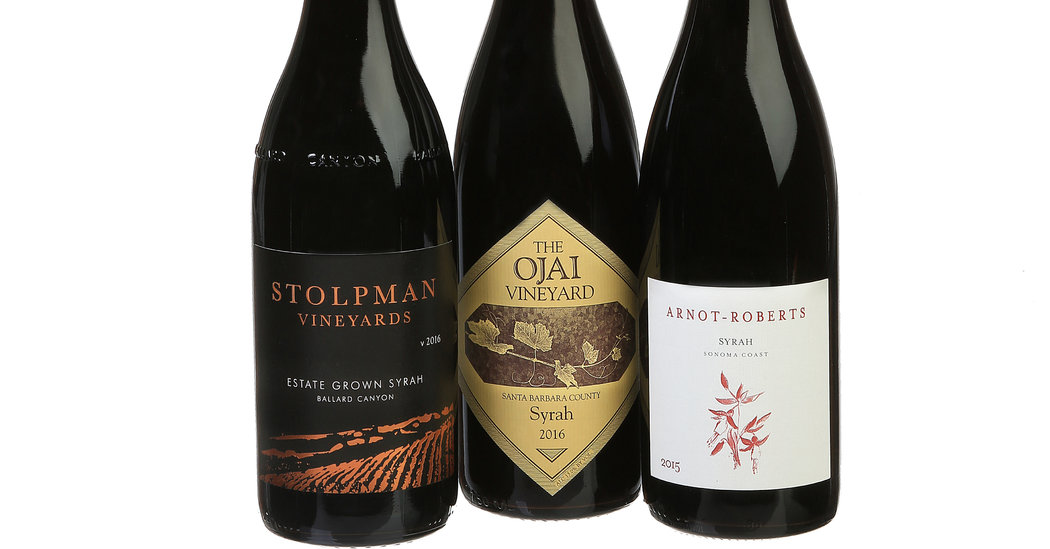 Some wines confirm assumptions. Others shock the system.

Good syrah, especially when made using traditional methods like fermenting the grapes with their stems, can be one of those jarring wines. Depending on one’s experience and expectations, it can delight or appall.

I adore syrah, and the more extreme, the better. Yet when I recently opened a bottle of Louis Sozet Cornas 2014, a traditionally made syrah wine from the Northern Rhône Valley of France, for dinner, a friend did a double take.

The Sozet Cornas, made in tiny quantities by an aging vigneron, epitomizes how unusual these wines can be. Its set of flavors — peppery, meaty, herbal and earthy — was one my friend had never encountered in a wine before. He was intrigued, but he was not sure whether he liked it. Or whether he didn’t like it.

His reaction was a valuable experience. For him, it was an introduction to a radically different sort of wine, which, to his credit, he did not reject out of hand. For me, it was a reminder of how a wine that I have come to know well and love might be perceived from a fresh perspective.

Shock value can be intriguing, but it alone is not enough to make a wine worth drinking. Here at Wine School, we seek out wines that are distinctive — a quality that in an exaggerated or unexpected form can be shocking. But something more is necessary as well.

Distinctive wines have identities derived from the inherent characters of the grapes, the places they were grown and the people who produced them. They must also be delicious, a subjective quality that varies like one’s musical taste.

The aim of Wine School is to help all of us develop our own sense of deliciousness, our own taste. That might sound like a silly goal. Does anybody really need help to determine whether they like sauerkraut or mushrooms or any other food that has its partisans and its skeptics?

Wine, though, occupies a fearsome pedestal that can intimidate drinkers into meek acceptance or provoke an equally unfortunate reaction of bullheadedness in an effort to prove oneself fearless.

Either way, the result is not a direct evaluation of the wine itself but a response to wine’s generalized aura.

The hope here is that we can try all manner of wines, eliminate those voices in our heads telling us what to think and focus entirely on our own reactions. In pursuit of that goal, each month I pick a particular type of wine and suggest three bottles for you to drink in a relaxed environment with friends or family.

For the last few weeks we have been drinking California syrah, which is generally much less extreme than the bottle of Cornas I opened. Yet the wines still managed to surprise a few readers.

The three bottles I recommended were: Stolpman Vineyards Ballard Canyon Estate Grown Syrah 2016; the Ojai Vineyard Santa Barbara County Syrah 2016 and Arnot-Roberts Sonoma Coast Syrah 2015. They ranged in price from $28 for the Stolpman to $45 for the Arnot-Roberts.

“Whoa,” said Dan Barron of Manhattan on taking a whiff of the Arnot-Roberts. “Never smelled anything like that before!”

Ferguson of Princeton, N.J., who tried the Stolpman and the Ojai, described the wines as “not sweetly fruity but feral fruity,” which I thought was apt. “These were wines with character and I liked them, but I don’t think everyone would,” she said.

I’m sure she is correct about that. The beauty of good wines in general is that they have points of view. Unlike the supermarket wines we drank in Wine School a year ago, which are focus-grouped and crowd-tested for the broadest possible appeal, effectively sanding off all rough edges until they achieve the homogeneous appeal of a news anchor, these wines are presented as is.

That is, they convey the character of the grapes as seen through the prisms of the places in which they are grown and as they have been shaped by the people who produced them. That is the formula for good wines, which, like good books, theater or food, are not intended to appeal to everybody.

None of the three California syrahs tasted quite as unusual as the old-school Cornas, but the 2015 Arnot-Roberts came closest. Possibly, this was because the grapes were fermented entirely with their stems (the same traditional method used in the Cornas) rather than destemmed, a more modern technique that generally yields a darker, fruitier wine.

These days, most conventionally fermented red wines are destemmed. But retaining the stems, sometimes called whole-cluster or whole-bunch fermentation because the bunches of grapes are left intact, still conveys a meaningful stylistic and cultural message with a handful of red grapes, particularly syrah and pinot noir.

The Arnot-Roberts was snappy and savory, with an earthy, meaty set of aromas and flavors that included violets, herbs and olives. It was intense, yet light and full of energy. Its alcohol level was just 12.5 percent, partly because the grapes came from relatively cool areas of the Sonoma Coast, and partly because that is the preferred style of the producers.

By comparison, the Ojai was less intensely savory and herbal. It was still floral, with syrah’s characteristic meaty, peppery, olive aromas and flavors, but it had a spine of red fruit, perhaps because the syrah was blended with 22 percent grenache and 3 percent sangiovese.

I hadn’t realized this in advance. Most syrahs are either 100 percent syrah or blended with a little viognier, as is traditional in Côte-Rôtie in the Northern Rhône. But all varietal wines in California may be blends, so long as the variety after which a bottle is named makes up at least 75 percent of the mix.

The Ojai was still an excellent wine, I thought, aromatic and lively, but less exotic than the Arnot-Roberts. Most of the grapes came from the eastern part of the Santa Rita Hills in western Santa Barbara County.

The Stolpman comes from Ballard Canyon in eastern Santa Barbara County, a warmer site compared with the Sonoma Coast or Santa Rita Hills, and the wine tasted riper and lusher than the other two. It had some herbal qualities, more anise and menthol than leafy and brambly, but it was by far the most mainstream of the wines, in the sense that the primary flavor was fruit.

Though it was 100 percent syrah, and 50 percent whole bunch, it still was the least distinctive of the three, and harder to immediately identify as syrah. Nonetheless, it was balanced and energetic, not bad at all.

It was evidence, though, that the character of syrah is hugely dependent on where it’s grown, as was pointed out by one reader Randall Grahm, the longtime proprietor of Bonny Doon Vineyard and a leading advocate for California syrah (who, by the way, recently sold the brand to WarRoom Ventures, a small wine company).

In California, it has often been planted in sites that were too warm, yielding generic red wines without the character that, in an extreme version like the Sozet Carnas, can make you sit up and take notice.

These three wines offered a sort of sliding scale of syrah, with the Arnot-Roberts furthest on the distinctive edge. Of course many other variables go into winemaking, like, as Mr. Grahm also mentioned, clonal selection. But site is crucial.

Most readers seemed to have liked both the Arnot-Roberts and the Ojai, which Martin Schappeit of Forest, Va., called “funktastic.” The Stolpman, however was divisive. VSB of San Francisco called it good syrah, but Pat Rooney of Chicago found an “unsubtle jammy quality” that was a turnoff.

Interestingly, it was generic fruitiness that people found to be an issue rather than the more distinctive qualities of syrah that can be polarizing.

Regardless of how people feel about the grape, the quality of the syrahs from California is getting better and better, and the grape has spread far from its home in the Northern Rhône, with great examples coming from Washington State, Australia (where it is often known as shiraz) and South Africa.

Intrepid readers might want to revisit the Rhône syrahs we tasted earlier, from Crozes-Hermitage and St.-Joseph. And if you’re looking for a winter treat, I highly recommend tracking down a bottle of Cornas.