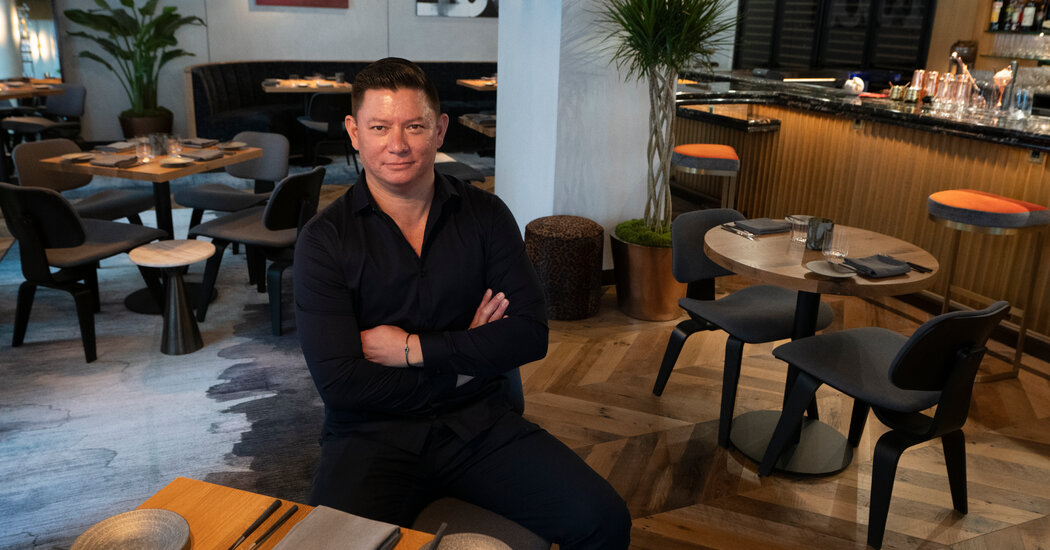 The original plan was to open a year ago, then construction delays and the pandemic altered that schedule. Now, Shaun Hergatt, the highly regarded Australian chef who has made a 20-year career of high-end cooking in New York, is finally opening his own restaurant. Because of pandemic restrictions, it won’t be exactly as planned. The restaurant, in the as-yet unopened Dominick Hotel, will have 40 seats under heat lamps in the outdoor plaza to one side of the hotel. (Mr. Hergatt said outdoor seating was originally planned for next year but expedited.) The interior dining room, with lofty ceilings and modern décor blending industrial materials, will seat just 30. “I cut my team by half due to the restrictions, down to 17 from 30,” Mr. Hergatt said. “Fortunately, my menu was always going to be quite simple.” It emphasizes vegetables and seafood and, in its present form, is fairly concise. Some snacks, like shiso tempura with shrimp, and nori chips with salmon, are to be followed by warm and cold small plates, including scallops with avocado and yuzu, sushi rice with fish and cured egg yolk, and chicken dumplings in pork broth. Larger plates feature fish like black sea bream and amberjack grilled over charcoal. (Opens Friday)

At the start of the month, Ravi DeRossi, the restaurateur with a collection of vegan places in the East Village, announced that he had created an umbrella company, Revolution Hospitality, to cover them. But there were issues with that name, so now the group is called Overthrow Hospitality. This new Filipino restaurant, replacing his Indian spot, Night Music, is the first restaurant to open as part of the new group. The chef, Raj Abat, offers a menu of small plates, including lumpia, roasted mushroom adobo, sinigang root vegetables in tamarind broth, and garlic fried rice. Kamayan, a lavish array of dishes for the table, is $50 per person.

This ode to the Provence region of France from Civetta Hospitality, the group that owns Amali, on the Upper East Side, and Calissa and Jimmy’s Food Truck, in the Hamptons, is not your typical Rockaways surfer hangout. It is in a luxury seaside apartment complex, and offers socially distanced dining outdoors, indoors and on the roof. The south of France is represented on a bistro-style menu, with bouillabaisse, crispy artichokes with aioli, and a tuna burger on brioche. But there are also classics like onion soup and steak frites. French aperitifs and wines from Provence, with plenty of rosés, of course, complement the food. The airy dining room has colorful accents that suggest Picasso and Matisse.

There’s now a pizzeria tucked inside the Zucker’s Bagels appetizing store in the Flatiron district. Matt Pomerantz and his partners, Dan Pace and the chef Rich DiBari, thought that producing New York-style pizza in the bagel oven was not out of place, especially if you dust the crust of a pepperoni pizza with “everything” seeds. So, along with smoked salmon on a bagel, you can get pizzas, full-size and individual, for takeout and delivery.

This new counter-service spot in the shopping concourse at Rockefeller Center is owned by Homer Murray. His father, the actor Bill Murray, celebrated his 70th birthday at the ribbon-cutting last week. The menu features tacos and rice and salad bowls, with a choice of pork, beef, chicken or vegetables, plus assorted condiments and other add-ons.

The changing cast of characters at the DeKalb Market Hall will now include a branch of Eyal Shani’s Israeli street food cafe, similar to the one he has in Chelsea Market. (Thursday)

This Midtown seafood restaurant is one of the lucky ones. Even with required social distancing, it can seat about 100. It also has an outdoor plaza with room for another 100 seats or so. The restaurant has reopened, with new chefs, Tim Jocz and Michael Aungst, who have added a scallop crudo with celeriac, kohlrabi and apple; mushroom carbonara with linguine; king crab tagliatelle; pan-roasted monkfish with braised cabbage, mustard and prosciutto; and a squash lasagna layered with vegetables and ricotta. The dining room has also been redecorated with handsome dark wood accents. (Wednesday)

Hiroki Odo, the chef and owner of the kaiseki restaurant o.d.o., is opening several expensive, secluded pop-ups on a very limited basis. First, there is o.d.o by ODO Whiskey Lounge, opening Thursday, where $200 buys a two-hour tasting of vintage Suntory Japanese whiskies, paired with food, in four courses plus two cocktails. The food on small plates might include Japanese beef jerky, pickled Spanish mackerel, and tiger shrimp with ginger jelly. There is socially distanced seating for 12 indoors and another six on an outdoor terrace. Also, a brief omakase restaurant run by the well-known chef, Eiji Ichimura called — are you ready? — Chef Ejii Ichimura’s Omakase Dining Experience at the Westerly, operates Friday and Saturday evenings, through Oct. 17, with seatings for 10 at 5:30 and 8:30 p.m.; $350 gets you 12 sushi courses, plus four additional courses by Mr. Hiroki.

Elizabeth Green opened Seabird, a casual seafood restaurant, four years ago. Now, after months of being closed because of the pandemic, she has reopened, but with a new name and focus. Planted offers plant-based fare and some seafood items, including shrimp risotto and crab cakes. Also on the menu are roasted eggplant, summer rolls and hand pies, filled with ingredients like corn and edamame.

This is what they’re calling the spacious garden behind Ladurée in SoHo now that the dinner menu is a collaboration, open Wednesday through Sundays until the end of October, between that pastry and tearoom restaurant and Bagatelle in the meatpacking district. In addition to many of Ladurée’s specialties, the new menu features a seafood tower, pan-roasted halibut, seafood pasta and côte de boeuf. The garden, where safety protocols are observed, has its own entrance.

Spotting the Risks of Indoor Dining