The Case for Sausage Rolls 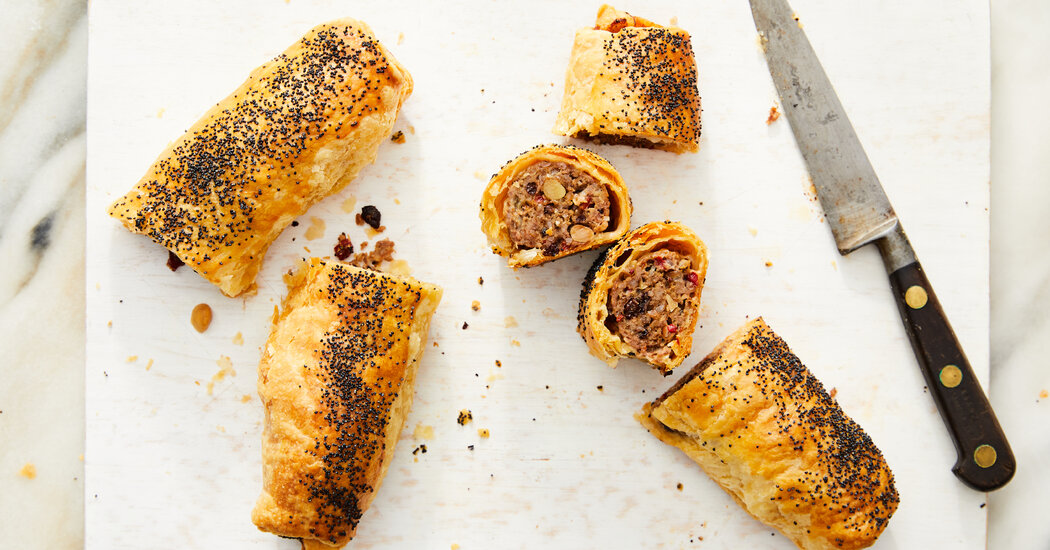 Good morning. Melissa Clark delved into the world of Australian sausage rolls this week, with an article about Paul Allam, an owner of Bourke Street Bakery in Sydney and Manhattan, and accompanying recipes stuffed with lamb, harissa and almond (above), pork and fennel sausage and vegan mushroom and leek. Sausage rolls are a mainstay of Australian school cafeterias and gas stations alike, and traditionally served with ketchup. These are not those sausage rolls, though. They merely evoke them while offering deliciousness on a higher plane. Set yourself up with some store-bought puff pastry and give them a try. You won’t be sorry.

And, in keeping with childhood pleasures, have chocolate chip cookies for dessert. For those, take a look at Charlotte Druckman’s article about the British baker Ravneet Gill and her recipe for “perfect” chocolate chip cookies, which among other things omits vanilla from the ingredient list. Her reasoning’s great. Vanilla’s too expensive now. “It was an everyday ingredient, and now it’s not,” she told Charlotte. “It’s like a special-treat ingredient.” You won’t miss it.

You may not want to make those today, of course. It’s Wednesday, after all, and for many that’s the worst day of the week to cook, when cooking seems most like a chore. If that’s you, fall back on an old standard, or just improvise, no recipe required. I did that last week in a kind of funk, warming garlic in olive oil with a little oregano and some red-pepper flakes, then adding canned chopped clams to the pan and a splash of white wine, and cooking it all down into syrup. I made some spaghetti then, built up my sauce with heavy cream and a huge amount of grated Parmesan, added the pasta to the pan with a splash of the water I’d cooked it in and mixed everything around until it was perfect. It was a delicious dinner, rich and velvety, and my funk dissipated with each bite.

Many thousands more recipes appropriate for weeknights are waiting for you on NYT Cooking. Go browse among them and see what you like. Save those recipes to your recipe box. Once you’ve cooked one, rate it. And you can leave notes on them, too, if you have any, either for yourself or for the benefit of your fellow subscribers. (Dozens of people work to bring you these features and recipes. Subscriptions are what make that possible. If you haven’t taken one out already, I hope you will think about subscribing today.)

We are, of course, available to help should anything go wrong along the way, either with your cooking or our technology. Just write us at cookingcare@nytimes.com, and someone will get back to you.

Now, it’s a very long way from peas and quail, but I strongly urge you to read Ayad Akhtar’s “Homeland Elegies,” a great American novel for a deeply divided America, filled with beautiful language and, as Dwight Garner noted in The Times, a kind of Gatsby-like flair.

Still more: this excerpt in Slate of Sarah Smarsh’s book about Dolly Parton, “She Come by It Natural.”

Finally, some new music to play us off: Mdou Moctar, “Chismiten,” brought to my attention by the dark lord of popular music, Jon Pareles. I’ll be back on Friday.

When the Stars Are Out of Alignment