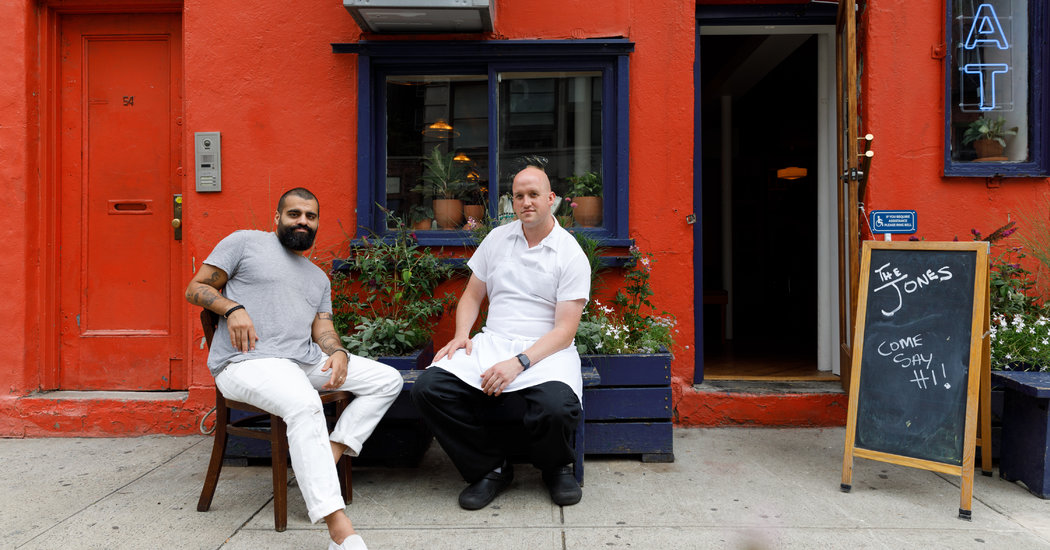 At his latest restaurant, Gabriel Stulman has given something of a nod to the Great Jones Cafe, in the cafe’s former space in NoHo. “I like places that existed a long time, that have history and legend,” he said. The new place is named after regulars’ nickname for the cafe, and Mr. Stulman is also keeping the exterior bright orange with blue trim — “Mets orange and blue,” as he said the former owner, Jim Moffett, described it. After Mr. Moffett died two years ago, the building’s owner approached Mr. Stulman to take over the space. It’s tiny, with 34 seats inside, including the bar, and will serve breakfast and lunch for now, and eventually dinner. Jack Harris, a partner and the executive chef at Mr. Stulman’s Fairfax and Bar Sardine, is in the kitchen. Like Mr. Stulman, he was inspired by Clamato, a trendy Paris bistronomie. The emphasis here will be on vegetables and seafood, and Mr. Stulman plans to offer a muffuletta sandwich at lunch. (Great Jones was known for its Cajun food.) French decorative touches abound, and the banquettes are covered in Moroccan kilim fabric.

The chef Russell Jackson’s tasting-menu restaurant, which started taking reservations with prepaid tickets online a month ago, opened last week. Seats for September at the counter-service dining room are now available, and October reservations can be made starting Sept. 1. Mr. Jackson, who has an advisory panel of four people, including Dominique Crenn, the Michelin-starred chef from San Francisco, serves farm-to-table fare with a California vibe.

A year-round kiosk selling pizza and gelato across the street from the flagship Eataly in New York is the latest from the chain, which just bought out Mario Batali’s minority stake in the company. A Turin specialty, pizza al padellino, a small pizza with a crust that’s crunchy on the outside and soft inside, will be on offer. Topping options are margherita, with mozzarella and tomato; verdure, with ricotta and zucchini; and gricia, combining onions, guanciale and pecorino. The kiosk is decorated with cityscapes by Patrick Vale, a Brooklyn artist. Soft drinks are available now; wine, cocktails and beer will come in the fall. (Opens Friday)

On two weekends (Aug. 23 through 25 and Sept. 13 through 15), the outdoor courtyard on the West 76th Street side of the museum will serve beer, wine, soft drinks and bar snacks (cash only) from 6 to 8 p.m. A replica of George Washington’s headquarters tent is set up on the lawn.

Southern Indian fare like idli lentil nuggets, fried kingfish, chickpea puffs, and dosas with various fillings share the menu in this 60-seat spot with a few cross-cultural creations like an Indian chile dog and idli poutine. The chef and an owner, Sruthi Chowdary, has entered into a partnership with Godavari, a national chain of more than two dozen Southern Indian restaurants. (Opens Wednesday)

This cafe owned by Missy Robbins and Sean Feeney next to their restaurant Lilia has had students from the Food and Finance High School in Manhattan as interns for part of the summer. On Aug. 27, the students will take it over, and from 7 a.m. until noon they will sell the baked goods they have made, with the proceeds benefiting their school’s coffee shop.

This is a satellite of Yaso, two Shanghainese restaurants in Brooklyn formerly called Yaso Tangbao. This new Manhattan spot with counter service has a menu of noodles and dumplings, and specializes in dry noodles (not in soup). It also sells a few packaged items like duck feet from Toofy Duck in Flushing, Queens, to eat in or take out.

The flagship store for this chain that specializes in a hybrid of New York and Montreal bagels is reopening Thursday after extensive renovations following a fire.

A public food hall with a broad range of offerings, including Sicilian-style pizza, Spanish tapas, Israeli hummus and pita and some kind of Southern fare is being created by the chef Franklin Becker, to open in about a year at the school’s new Manhattanville campus.

Dale Talde, a minor partner in this restaurant, and the other owners have called it quits.