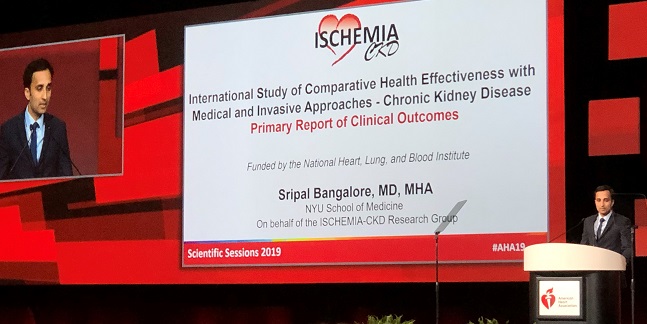 The results in this high-risk population show no impact on clinical outcomes or quality of life.

The lack of benefit with invasive treatment was seen across a variety of other clinical outcomes, and, in fact, there was an increase in stroke relative to conservative management. Moreover, a composite safety endpoint of death or new dialysis was more frequent in the invasive arm (HR 1.48; 95% CI 1.04-2.11).

A separate quality-of-life analysis failed to show a positive impact with the invasive approach; this is in contrast to the main ISCHEMIA trial, which did demonstrate a symptomatic benefit.

Bangalore said he was “kind of surprised” by the results regarding clinical outcomes. “We were hoping that in a high-risk group of patients we potentially could find a benefit,” he told TCTMD. “It was one of those [situations] where we felt like potentially there is a benefit but we have to make sure there isn’t excess harm up front to offset the potential later benefits.”

He noted that physicians have tended to err on the side of caution and not perform invasive procedures in patients with advanced CKD and stable coronary disease for fear of harming the kidneys. The message from ISCHEMIA-CKD, Bangalore said, is that “if you do the procedure the way it was done in the trial, it’s safe, but routinely doing these procedures in these patients to prolong life or reduce MI is likely not beneficial.”

Asked about the lack of relief with the invasive strategy, Bangalore noted that there was a low symptom burden overall in the trial, with only about 12% of patients with daily or weekly angina and half without any at all. “If you’re less symptomatic, you still won’t get any symptomatic benefit from this,” he said. Bangalore added, however, that the trial does not address whether highly symptomatic patients or those presenting with a cardiac event might have something to gain.

Commenting for TCTMD, Somjot Brar, MD (Kaiser Permanente, Los Angeles, CA), stressed that “this is a strategy trial, not a direct comparison of medical therapy versus PCI and CABG. This is a very defined, specific, stable population where known comorbidities or factors that identify patients who’d benefit from revascularization were excluded.”

He raised some questions about the trial, including regarding how complete assessments of serum creatinine were, noting that the acute kidney injury rates were much lower than expected based on the risk profile of the population.

Nevertheless, Brar said, the trial “shows that a medical therapy-first approach in the very select population of patients with CKD may be reasonable. Clinicians should have a discussion of the pros and cons with each patient and take patient factors into consideration when deciding between a conservative or early-invasive strategy.”

It was important to single out patients with advanced CKD for this trial, Bangalore said, because they represent a growing population in the context of exploding diabetes and obesity rates and have largely been excluded from contemporary trials pitting an invasive strategy versus conservative management in stable ischemic heart disease. There were only 16 such patients in COURAGE, 20 in FAME 2, and none in BARI 2D, he pointed out.

Physicians have responded variably to that dearth of evidence, with some extrapolating the data from the trials to the advanced CKD population and performing invasive procedures and others avoiding interventions in the absence of an acute event because of a fear of harming the kidneys. But even in the case of acute MI, patients with kidney disease are much less likely to undergo PCI than those with normal renal function, Bangalore said.

The ISCHEMIA-CKD trial, conducted in 30 countries, included 777 patients with advanced CKD (estimated glomerular filtration rate less than 30 mL/min/1.73 m2 or on dialysis), stable ischemic heart disease, and at least moderate ischemic on an exercise or pharmacologic stress test. Median age was 63, and 31% of patients were women. Slightly more than half (53%) were on dialysis. Of the remaining patients, 86% had stage 4 and 14% had stage 5 CKD.

Patients were randomized to a routine invasive approach—coronary angiography followed revascularization in appropriate patients—plus optimal medical therapy or to optimal medical therapy alone (patients in this arm were treated invasively if their symptoms worsened or there was an emergent reason). Ultimately, coronary angiography was performed in 85% of patients in the invasive arm and 22% of those in the conservative arm, with revascularization performed in 50% and 12%, respectively. Revascularization was primarily done with PCI (85%), with CABG used in the rest.

Through a median follow-up of more than 2 years, the rate of death or MI did not differ between the invasive and conservative arms. A subgroup analysis, however, suggested that invasive management might be beneficial in those with severe ischemia at baseline and that optimal medical therapy alone might be better for those with moderate ischemia (P = 0.02 for interaction).

Most other clinical outcomes occurred at similar rates in the two trial arms, although stroke was increased with a routine invasive strategy (HR 3.76; 95% CI 1.52-9.32). Bangalore noted that there was only one stroke in each group within the first 30 days, indicating that most strokes—and the between-group difference—were not related to the procedures. “Is it just because these patients are too sick and they have strokes down the line regardless of the procedure? We are looking more into the details,” he said.

Brar said the fact that the difference in stroke emerged beyond the immediate postprocedural period suggests that the finding is due to chance.

In the trial, the researchers put in place various measures, including customized hydration, use of a heart/kidney team with a nephrologist, and strict limits on contrast agents, to protect against procedure-related kidney injury. That resulted in an acute kidney injury rate of about 7%, much lower than the expected rate of 30% to 60% in this type of population, Bangalore said.

Renal outcomes appeared to be worse with a routine invasive strategy, however. Risk of the composite of death or new dialysis was higher in that arm (HR 1.48; 95% CI 1.04-2.11), driven by an increase in the risk of new dialysis.

Overall, patients had a low symptom burden at baseline, with about 12% experiencing daily/weekly angina, 39% experiencing angina several times a month, and 49% having no symptoms at all.

There were not substantial overall changes in the SAQ summary score, angina frequency score, and quality of life during the course of the trial, and they were no greater in the invasive arm.

In the patients with daily/weekly angina, there appeared to be an early benefit with the routine invasive strategy at 3 months in terms of the SAQ summary score, but that difference had disappeared by 12 months and 3 years.

Bangalore said he “wasn’t too surprised” by these results, because these types of patients tend to be less symptomatic. ISCHEMIA-CKD enrolled a low number of patients with daily or weekly symptoms and may therefore have been underpowered to detect a quality-of-life difference between groups, he said.

A second explanation for the lack of a quality-of-life difference could be related to the etiology of chest pain in patients with advanced CKD, which may be related to both epicardial and microvascular disease. “So fixing an epicardial stenosis may not fully benefit this group of patients,” he explained.

Spertus noted that because enrollment in ISCHEMIA-CKD was skewed toward less-symptomatic patients, they might not have been able to detect a benefit in the more-symptomatic groups.

Despite the neutral results in terms of clinical and quality-of-life outcomes, Glenn Levine, MD (Baylor College of Medicine and Michael E. DeBakey VA Medical Center, Houston, TX), who served as a discussant following Bangalore’s presentation, said ISCHEMIA-CKD helps fill an important gap in knowledge. He noted that revascularization guidelines do not specifically address patients with CKD “due to a paucity of useful randomized data.”

He pointed out some caveats to consider when interpreting the trial. The results do not apply to patients with recent ACS, unacceptable angina despite maximal medical therapy, or significant heart failure because they were excluded, he said. In addition, he said,“it seems unlikely that all centers routinely do and will exactly follow the very careful measures to limit contrast and minimize contrast nephropathy used in this study.” Moreover, only half of the patients had multivessel disease, only 80% in the invasive arm underwent angiography and only about half underwent revascularization.

“That said, this was as well-designed and -executed a trial as one can practically do in the real world,” Levine stated, calling it a “monumental achievement.”

These findings will help inform future guidelines, he indicated. But for now, he concluded, “I will generally not go searching for ischemia and CAD in most severe and end-stage CKD patients, absent marked or unacceptable angina, and will treat them with medical therapy alone.”

Drinking zero-calorie cola isn’t doing anything for you – BGR

These are the laziest states in America, CDC study finds – Fox News