Jeffrey and Susan Rothenberg were looking to downsize when they recently moved from their four-bedroom home in northern Bergen County, N.J., to a two-bedroom condominium in Cliffside Park. Now they’re not only closer to New York City, but they also have sweeping views of the city and the Hudson River from their 25th-floor unit in the Winston Towers complex.

Across the Hudson River from Upper Manhattan — and just seven and a half miles northwest of Times Square — the borough of Cliffside Park packs 25,000 people into one square mile. It offers easy access to New York City by bus or ferry, with housing prices that are more affordable than those in the city.

And unlike more suburban towns in Bergen County, Cliffside Park has an urban atmosphere that recalls neighborhoods in Brooklyn or Queens, with a mix of apartments, stores and prewar homes on narrow lots. 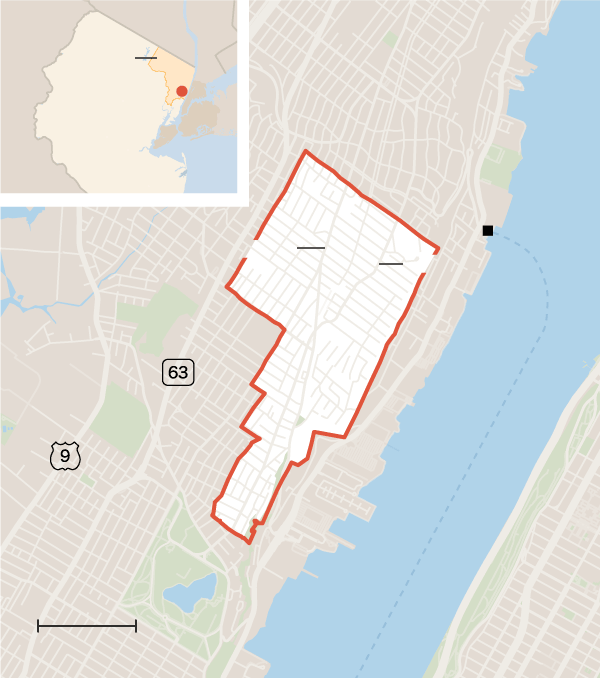 “A lot of people scoff at the idea of coming to New Jersey, but they don’t realize how close it is,” said Ani Whitney, 49, a television news producer, who moved to Cliffside Park from Greenwich Village in 2003 with her husband, Wil Whitney, 48, a brand manager for a sneaker retailer. The couple decided to make the move after visiting friends in a Cliffside Park co-op called Apogee.

“I was just floored by the view of the river and the space they had,” Mr. Whitney said. “When they told us how much they paid, we were in.”

The Whitneys, both of whom work in New York City, said the commute by bus or ferry takes about 45 minutes. And they are happy with the diversity of Cliffside Park, which is about 30 percent Hispanic and 17 percent Asian. “My daughter is exposed to different ethnic groups in school, which we like a lot,” Mr. Whitney said.

Kaya Abe Magee, 56, a floral designer, moved to Cliffside Park from Bernardsville, N.J., to be closer to New York’s flower markets. “I can go to the city easily and come back for a little peace,” she said.

Ms. Magee’s son is heading to college in the fall, so she no longer has to live near his high school, the Peddie School in Hightstown, N.J. She recently bought a two-bedroom condo in a new building, One Park, on Adolphus Avenue. She declined to disclose the price, but two-bedroom units in the building range from about $800,000 to $1.4 million.

Cliffside Park, which sits on the stretch of riverside cliffs known as the Palisades, is just south of Fort Lee, overlooking the town of Edgewater and the Hudson River. According to the most recent census, it has about 11,000 housing units, including about 2,100 single-family homes and 2,300 two-family properties.

Bruce Elia Jr., 66, a builder and real estate agent with Keller Williams, grew up in the borough and has seen the housing stock evolve as a number of multifamily buildings have gone up.

“The biggest change is the mid-rise and high-rise” development, Mr. Elia said. “And it seems like it’s still continuing.”

Recent examples include One Park, a 14-story luxury condominium that opened in October, with 204 units priced from $500,000 to $4.7 million. The Centre, another example, is a 16-story, 314-unit luxury rental building in the heart of the business district, with retail on the ground floor; rents start at $1,875 a month for alcove studios and $2,750 for two-bedrooms.

Many of Cliffside Park’s older single-family houses on 50-by-100-foot lots have been replaced by attached duplex homes. “That’s the most popular product in town,” said Mr. Elia, who has built some of them. Units typically have three bedrooms and three and a half bathrooms, and are priced from about $700,000 to $750,000.

According to the New Jersey Multiple Listing Service and the real estate website Zillow, there were about 150 homes on the market in Cliffside Park as of July 1. Prices ranged from $199,000 for a studio condominium to $6.9 million for a five-bedroom, single-family house with river views.

According to the Multiple Listing Service, 347 homes sold in Cliffside Park in the 12 months ending July 1, up 21 percent from the same period a year earlier. The median sale price was $460,000 for condos and townhouses, up 10.7 percent from the previous year, and the median for single-family homes was $480,000, down 5 percent.

Anderson Avenue is the main shopping street, with small businesses including tailors, restaurants and boutiques. Several have been in town for decades — among them Miller’s Bakery, which open its doors in 1947; D’Amore Jewelers, founded in 1917; and Music Country, a record store that opened in 1934.

Cliffside Park has several popular Turkish and Italian restaurants, as well as the new Sedona Taphouse at the Centre.

Because the town is so compact and has its own shopping district, it is ideal for pedestrians, said Jeanne Grod, a real estate agent with Group 26 Realty in Edgewater, who has lived in Cliffside Park for 40 years. “You don’t even have to have a car,” she said.

Residents who are willing to drive can find chains like Target and Whole Foods in Edgewater, minutes away by car. The shopping malls of Paramus are a 15-minute drive.

Cliffside Park has about 3,100 students in four elementary schools, a middle school and Cliffside Park High School. Average SAT scores in 2017-18 were 515 in reading and writing, and 513 in math, compared with state averages of 542 and 543. About 80 percent of graduates enroll in postsecondary education.

Driving into New York City can take 30 to 60 minutes at rush hour, depending on traffic. The New York Waterway ferry from Edgewater to West 39th Street in Manhattan takes about 13 minutes; the fare is $11.25 one-way, or $336.25 monthly.

When Palisades Amusement Park opened on the Cliffside Park-Fort Lee border in 1908, it drew visitors from New York City and around the metropolitan area. Mary Ann Maiorana, 62, a lifelong Cliffside Park resident, remembers visiting the park often in her youth. “My cousins worked as lifeguards there, and our schools would have a class trip every spring,” said Ms. Maiorana, a real estate appraiser.

The park, which offered rides and a large pool complete with an artificial waterfall, inspired a 1962 pop song, “Palisades Park,” as well as several books. But many people who lived nearby eventually grew tired of the crush of traffic around the park, and the land was rezoned for residential use. The 38-acre site closed in 1971 and was replaced by the high-rise Winston Towers, on Palisade Avenue.