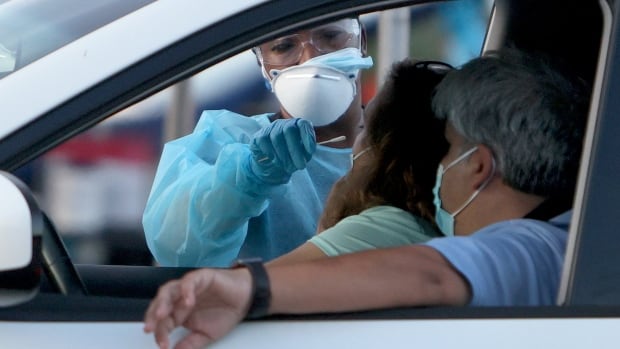 U.S. President Joe Biden plans to require all federal employees get vaccinated against COVID-19 and is expected to announce vaccination requirements for private companies that get government contracts which could affect millions more employees.

With U.S. COVID-19 cases surging among the unvaccinated, Biden will also lay out new steps schools and workplaces can take to mitigate the spread of the virus in a 5 p.m. ET speech.

‘Really bad timing’: How an Alberta cancer patient has been riding the waves of COVID-19

Many in the United States remain skeptical of the shots two months after Biden declared that Americans are “closer than ever to declaring our independence” from the coronavirus.

The president will sign an executive order on Thursday that applies to some four million U.S. government workers.

Any such requirements could affect millions more employees, including workers at hospitals that get government contracts to treat patients on Medicaid or Medicare, social welfare programs for the poor, disabled and older Americans.

“Our overarching objective here is to reduce the number of unvaccinated Americans,” she said, noting that 80 million still have not been vaccinated.

“We want to reduce that number, decrease hospitalizations and deaths and allow our children to go to school safely.”

Just over 53 per cent of all Americans are fully vaccinated, including almost two-thirds of the adult population, according to CDC data. The disease has killed more than 654,000 Americans.

Federal workers unions suggested they would accept the vaccine mandate. The employees will have a 75-day period to get vaccinated, and will be referred to human resources for counselling and possible disciplinary action if they do not get the shot, Psaki said.

The speech will also cover increasing testing and mask-wearing, protecting the economic recovery from the pandemic-induced recession, and improving healthcare for people infected with the disease, she said in television interviews.

“He’s going to speak directly to vaccinated people and their frustration, and he wants them to hear how we’re going to build on what we’ve done to date to get the virus under control and to return to some version of normal in this country,” she said.

Increasing infections have raised concerns as children head back to school, while also rattling investors and upending company return-to-office plans.

With 160,000 new infections a day, the country is “still in pandemic mode … That’s not even modestly good control,” Biden’s chief medical adviser Dr. Anthony Fauci told Axios, adding: “You’ve got to get well below 10,000 before you start feeling comfortable.”

The White House plans to offer booster shots providing additional protection to those who are fully vaccinated, a rejection of arguments from the World Health Organization and other advocates that with global vaccine supplies limited, rich countries should pause booster shots until more people worldwide are inoculated.

Abbott Laboratories and other test manufacturers are trying to boost production as cases soar, after having scaled back in recent months. CVS Health Corp recently imposed limits on the number of at-home tests customers can buy.

“It’s hard to find a test … they should be more available and accessible to people across the country,” Psaki said.

The White House said the federal government cannot mandate vaccines nationwide, but it has encouraged school districts, businesses and other entities to require shots.

Many school districts have mandated masks, despite heated controversy in some areas, and some have required teachers to be vaccinated or face regular testing.

As Courts Reopen, Divorce Filings Are on the Rise

‘Really bad timing’: How an Alberta cancer patient has been riding the waves of COVID-19

What COVID-19 precautions are being taken on voting day?

Why these vaccine-hesitant Indigenous women in N.W.T. decided to get the jab

A Sip of Paradise

3 Ways To Use Stories For Customer Research