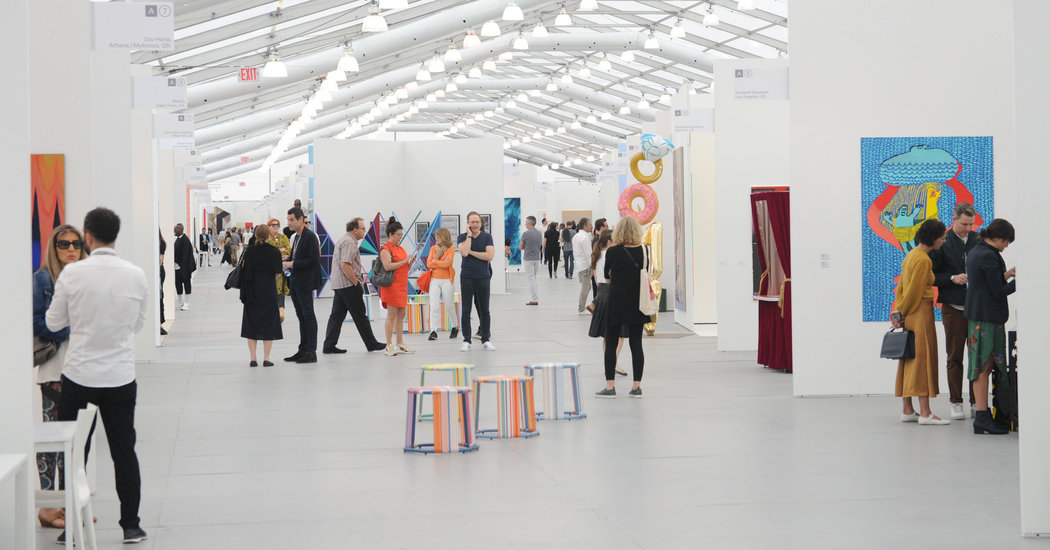 Art Basel Miami Beach is not only a fair, but also the linchpin of a whole event ecosystem.

In addition to copious parties, product debuts, panel discussions, exhibitions and champagne receptions, at least 18 other art fairs are taking place during Miami Art Week, which runs through Sunday.

They are often referred to as satellite fairs — though one of them, Art Miami, is actually more than a decade older than Art Basel’s Florida iteration.

“To me, it’s a moniker of respect,” Alexis Hubshman, the founder and director of Scope, said of the “satellite” term. “We’re not a competitor of Art Basel; we’re a complement.”

Serious and enthusiastic collectors are known to attend multiple fairs, though logistics can be a challenge.

Some fairs are in Miami Beach, with more than one setting up shop on the sand itself in purpose-built tents; others are in the artsy Wynwood neighborhood; and still more are in downtown Miami. Being stuck on a traffic-clogged causeway is one of the common experiences of fair week as buyers crisscross the area looking for something to catch their eye.

“I spend a couple days just hitting all the fairs,” said Arthur Lewis, a Los Angeles-based collector who is director of the fine arts division for United Talent Agency. He added that those visits come after he has scoured Art Basel, which takes place in the Miami Beach Convention Center.

Mr. Lewis, who specializes in what he calls “artists of color, work by women and emerging artists,” recalled discovering the work of Amy Sherald at one of the satellite fairs several years ago; Ms. Sherald has since become an art world star, best known for her portrait of Michelle Obama.

“I always go with the intent of finding something new,” he said. “You’ll never know what you’ll discover.”

Below is a sampling of some of the fairs that might provide a discovery, or 10.

Less of a satellite and more of a younger sibling, this fair takes place next door to Art Basel Miami Beach and is partly owned by the larger fair’s parent company. For its 15th edition, about 48 dealers will offer the visually striking presentations the fair is known for. Gallerists display everything from furniture and decorative objects to high-concept design installations that could be shown at Art Basel. Some programming will revolve around an ecological theme, “Elements: Water,” that is pertinent to South Florida.

“There are a few newcomers this year,” said the fair’s curatorial director, Aric Chen. “But people will still be able to see their Royères, Prouvés and Perriands” — French midcentury designers who are staples of the fair. Broadening the range of items on view, Mr. Chen said, are Kerr Fine Art’s ceremonial works from Africa and the Erik Thomsen Gallery’s medieval ceramic storage jars from Japan.

Now having its 30th edition, this downtown event was originally held in January, but it moved to December to sync up with the other fairs. “It’s been a successful transition,” said Nick Korniloff, the fair’s director. The nearly 180 dealers offer a wide variety of material, with an emphasis on big names of the modern era more than cutting-edge contemporary; the latter fuels the fair’s spinoff, Context Art Miami. “We offer better value to the collecting audience,” Mr. Korniloff said. “It’s a little more laid-back vibe, but the art is serious.”

This fair, which also has a New York edition in March, has a clear mandate. “We’re about emerging contemporary art, and showing people what’s new,” Mr. Hubshman said. “We like to think we’re breeding the next generation of collector.” For the 19th edition, more than 135 galleries are on hand in a pavilion built right on Miami Beach, and this year there is a dedicated section for Chinese contemporary art, with six dealers.

Can a fair be devoted to curing you of fair fatigue? Pulse’s 15th edition, which takes place in Indian Beach Park, is giving it a go. With about 65 galleries, “It’s a nice, digestible amount,” said the fair’s director, Cristina Salmastrelli, who noted a rich vein of Latin American art on view this year. Best of all, there’s a “wellness lounge” devoted to the theme “Calm in the Palms,” with cocktails and tapas available for purchase. “We want to avoid that you’re ticking off a checklist,” Ms. Salmastrelli said, “and you need to feel good to absorb the art.”

The organizers of the eighth edition of Untitled — with about 126 exhibitors from 28 countries gathered in a tent on the beach — are emphasizing its geographic range. Manuela Mozo, the executive director, noted that more than a third of the visitors are from outside the United States. Though Latin American participation has dipped a bit, she said, “We’ve seen a huge uptick from the Midwest.” More than half of the presentations are solo booths or focused on just two artists.

The 17th edition of this downtown fair will feature about 136 exhibitors. It is known as a poaching ground for Art Basel; many of its galleries have moved to the larger fair. “When they have space, they look to NADA first,” said Heather Hubbs, the longtime executive director. The reason, she said, was the credibility NADA has developed over time with “serious collectors.” She added that many solo booths by women will be presented this year, and noted one “microtrend”: Southern galleries, from Nashville, Atlanta and Athens, Ga., are in the mix.

Who Needs Special Effects When You Have Arts and Crafts?

James Joyce: Exhuming bones and resurrecting house of The Dead

Ordering groceries from Walmart? You can save $10 with this code.