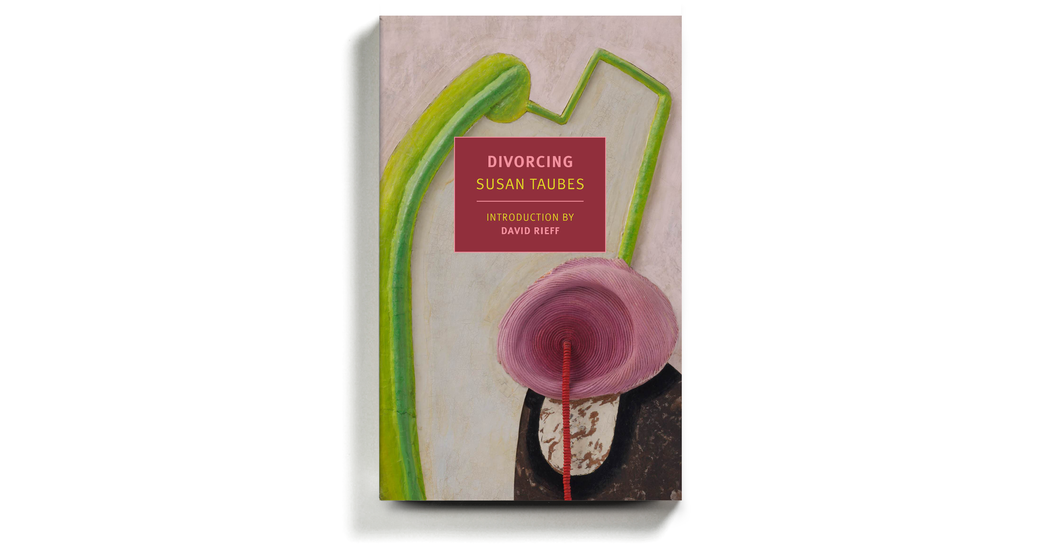 Because there are many things to say about Susan Taubes’s remarkable 1969 novel “Divorcing,” and many of those things concern the grim side of both real life and life in the book, I’d like to start by saying that it’s funny. It’s not a comic novel, by any stretch, but neglecting to mention its humor would shortchange it and deform one’s initial idea of it.

Much of this humor comes at the expense of psychoanalysis. It’s possible there is more talk of analysis in “Divorcing” than in the entire filmography of Woody Allen. “Before you do anything,” one doctor in it says, “you need at least seven years of analysis. Minimum five; absolute minimum.”

While conversing with his sister-in-law, another man thinks: “How could he explain to Olga, who hadn’t read Freud, that his wife wasn’t really unfaithful,” that “it was her neurosis, she couldn’t help it.” Students at a medical school joke that Freud’s theory is a “technique grown-up men use to talk to juvenile girls about dirty things.”

If you’d heard of Taubes before this novel was recently reissued by New York Review Books, there’s a good chance it was in connection with Susan Sontag. Taubes and her husband, the philosopher and religious scholar Jacob Taubes, were among the closest friends of Sontag and her husband, Philip Rieff. After Taubes committed suicide in the ocean off Long Island in 1969, Sontag identified her body. (Sontag’s son, David Rieff, contributes an introduction to this new edition of the novel.)

Taubes had suffered from depression and previously attempted suicide. “Divorcing,” her first and only book, was published a week before she drowned. It received one notoriously dispiriting review in this newspaper, an aggressively chauvinistic assessment by Hugh Kenner, an acclaimed writer on literary modernism who sniffed at the “mild rewards” offered by “Divorcing” and said that its fleeting best qualities suggested that Taubes could have written instead a better, “very old-fashioned” book that “transcends the with-it cat’s cradling of lady novelists.”

“Divorcing” draws deeply on Taubes’s own life. Benjamin Moser, in his biography of Sontag published last year, offered this efficient description of Taubes, which doubles as a description of Sophie Blind, the novel’s protagonist: “Torn from Europe but estranged from America, alienated from the Judaism of her grandparents but unconvinced by the Freudianism of her father.”

Sophie, like Taubes, was born in Hungary, the granddaughter of the chief rabbi of Budapest and the daughter of an atheist psychoanalyst. Sophie and her husband, a scholar named Ezra who resembles Jacob Taubes, meet in New York, marry, agree that they won’t be so bourgeois as to sexually limit each other, and then travel the world, Ezra lecturing and doing research for a book he’s writing. Sophie eventually relocates with the couple’s children to Paris, where Ezra visits from time to time. At one point, she mentally catalogs her various lovers: one a married man, one an “outright bastard and pervert” (a candor she finds “positively refreshing”), another a bore who improves the circumference of her social circle and so on.

Ezra can’t believe she wants a divorce, given all the freedom she has, but for years she tries to convince him that it’s over. “The thought of being married to you drives me insane,” she finally says. (He immediately recommends she see an analyst.)

To back up and ask a fundamental question: Is Sophie alive or dead? In the opening pages, she tells us she’s been killed, hit by a car after leaving the hairdresser. One short section near the middle of the novel, formatted like a play, presents a kind of afterlife tribunal in which Ezra and Sophie’s father argue with orthodox Hungarian rabbis for possession of her soul. Meta moments like these in “Divorcing” more frequently feel like feints toward experimentation than an impediment to understanding. This is especially true in the novel’s second half, which more conventionally recounts Sophie’s early life in Budapest; her voyage, in 1939 at 10 years old, to live in America with her father; and a return trip to Europe later in life.

Introducing Sophie in her adult distractibility and distress and then going backward to show her family’s life in prewar Europe is a rewarding strategy. What could have seemed like a clever but shallow way to do some Freudian searching is much richer, a kind of historical novella within the novel, amplifying Sophie’s character and offering a detailed view of the world that made her. “Her sense of the matter was that things were generally hopeless and that there was no place for her anywhere,” Taubes writes of the adult Sophie. “The world in which she would have wanted to live had ended — before Hiroshima, before Auschwitz.”

In Budapest, we see Sophie’s family gathering to celebrate Passover despite none of them being particularly religious. “Religion was something old and shabby; it was a dusty ugly piece of furniture you were ashamed to have in your own house, even in the back room, but you couldn’t get rid of it any more than you could get rid of Grandmother.” We sit alongside relatives swapping family lore, like the story of the aunt who “escaped from Budapest at the time when they were shooting down all the communists, leaping on a moving train in her nightgown.”

Sophie’s relationships with her parents are beautifully drawn, most impressively in a pair of consecutive scenes recalling her childhood. In the first, her father makes her laugh with his impressions of people, including his patients. “Why did people really come to him, she asked; what was the matter with them, what did he do for them,” Taubes writes. “She listened very carefully so she could avoid this happening to her.” Then her father relates a series of anecdotes characterizing various people he’s treated.

In the following scene, Sophie interrupts her mother reading and the two have a tense conversation, its full emotional contours only partly understood by Sophie. “Do you know why you don’t love me?” her mother asks.

“To say something to stop her mother from continuing, Sophie said, ‘Because you’re always away.’ Now she was angry at herself. She heard that from others. She had no right to say it to her mother. She was glad when her mother was away.”

In one of the heavier-handed moments, Sophie tersely says to a therapist: “I must repeat my mother’s life.” From the start, Sophie’s lifelong love of travel is presented as part free-spiritedness and part coping mechanism, a way to deal with the “oppressive, superfluous” nature of time.

Time and history, as experienced both personally and collectively, are just two of the big ideas this novel leaves a reader pondering. Aptly, given all the psychoanalysis, “Divorcing” is also rife with thoughts about dreams: recounted dreams, dreamlike imagery, the uncertain blurring of dream and reality. Packing for one trip while remembering another, Sophie feels that it’s “disconcerting how the urgencies of dream and waking life correspond. At home in neither. The one who got up no more myself than the one dreaming.”

Even After Netflix Cancellation, The Society‘s Creator Has Hopes For A Season 2

Travel The World With Your Ears

Malcolm X, Laurence Fishburne and ‘the Theater of Your Mind’

Seth Meyers breaks down why coronavirus stimulus packages are a misnomer