Amid Impeachment Drama, a Bipartisan Celebration of the Arts

by admin
in Arts, Music
0 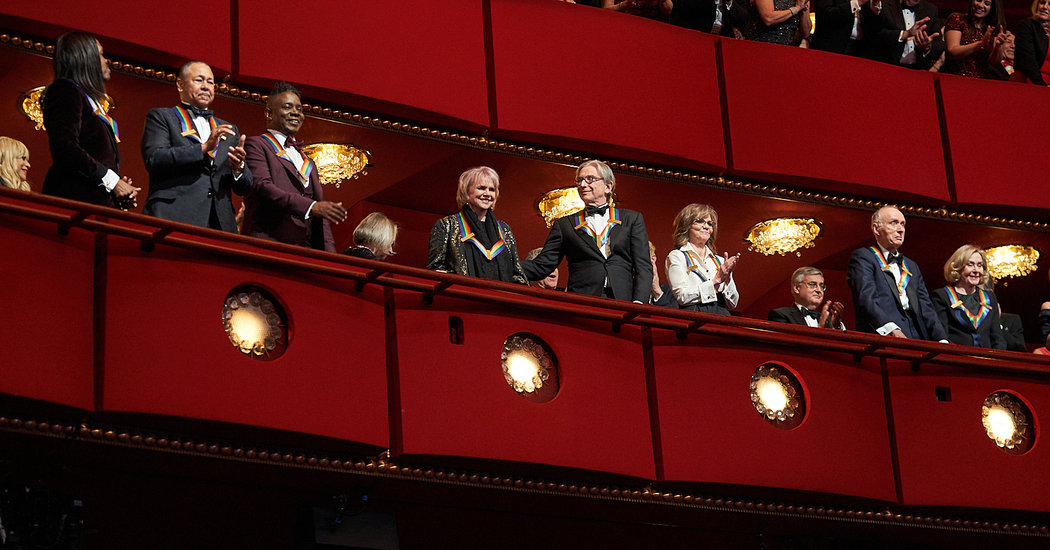 WASHINGTON — Speaker Nancy Pelosi of California, in a full-length gown, waved to a standing ovation from a star-studded menagerie of Washington on Sunday in the Kennedy Center Opera House, just hours before the impeachment inquiry was set to resume the next morning.

In the same box tier, acknowledged with a slightly more subdued round of applause, was Chief Justice John Roberts, the man who would oversee an impeachment trial, sitting near a cluster of cabinet secretaries representing the administration.

And by the end of the night, all appeared to be enthusiastically grooving (and singing along) to a cover of Earth, Wind & Fire’s “September,” with little mention of the fraught political moment or the president at the heart of it all.

The scene was not atypical for the Kennedy Center Honors, a historically nonpartisan affair that celebrates giants of the arts, culminating a weekend of festivities with glowing tributes to honorees. But the dichotomy of this Washington tradition — dozens of lawmakers, Washington denizens and acclaimed artists embracing a pause in partisan rancor to spend three hours singing, cheering and dancing — was all the more striking as the impeachment drama carried on through the weekend.

“Every once in a while, artists have an opportunity to say something pithy, witty, even provocative,” said Michael Tilson Thomas, the music director of the San Francisco Symphony and an honoree. “This is not the time.”

But with the allegations engulfing President Trump and his administration, some remarks appeared to take on a heightened significance, particularly at a Saturday night dinner at the State Department: Mr. Thomas noted his Ukrainian ancestry, while the actress Sally Field declared that the arts were needed more than ever as “truth is being challenged.”

And when Secretary of State Mike Pompeo joked “as I travel the world, I wonder when will I be loved,” referring to the Linda Ronstadt’s song “When Will I Be Loved,” the singer offered a stinging retort.

“I’d like to say to Mr. Pompeo, who wonders when he’ll be loved, it’s when he stops enabling Donald Trump,” Ms. Ronstadt said, to gasps and scattered applause.

But the artists present for Sunday’s ceremony, including those paying tribute to the five recipients of the Kennedy Center’s award for lifetime achievements in the arts, strove to underline their pursuit for the truth — and the role the arts plays in bridging divisions.

That theme was woven into the tributes to the honorees — Ms. Ronstadt, Mr. Thomas, Ms. Field, “Sesame Street” and the members of Earth, Wind & Fire — and sometimes emerged unprompted during the night’s events. Joseph Gordon-Levitt, chatting with Cookie Monster during a tribute to “Sesame Street,” said that the show’s lessons of “mutual respect, kindness and acceptances of others” were “something we could all use a little more of, especially these days.”

And in an unscripted moment between tributes, LL Cool J, the host of the gala, offered a monologue in tribute to the importance of the arts, reminding the audience that “we have to be mindful of this moment.”

“We would hope that art would bring us together as a nation, and make us all a little closer,” he told reporters earlier in the evening. “We don’t want to, by any means, undermine the freedoms of the artist to see challenging things and to speak their truth, but at the same time it’s nice to see people brought together.”

There were poignant tributes to those who had passed on, artists who were critical parts of the work being celebrated.

And the humans behind some of “Sesame Street’s” most iconic characters offered reporters a brief tribute to Caroll Spinney, who died Sunday morning and who was the original Big Bird and Oscar the Grouch. The tribute performance to “Sesame Street,” the first television show to receive the Kennedy Center award, was done in Mr. Spinney’s honor, said David M. Rubenstein, the chairman of the center.

“I’ve won a lot of awards in my life — this is just still so unique, and I just feel overwhelmed,” Ms. Field said in an interview Saturday, before formally receiving her award.

“And if that’s Tom Hanks over there,” she added, spotting her “Forrest Gump” co-star, “I’m going to die. Steven is here, and Tom is here?” she said, referring to Steven Spielberg. “I think I have to go home now.”

Mr. Hanks on Sunday delivered a tribute to her with a drawled “hey mama” — a reference to the “Forrest Gump” film — and Mr. Spielberg delivered a glowing speech.

Alumni from Mr. Thomas’s New World Symphony staged rousing renditions of Aaron Copland’s “Hoedown,” excerpts from Stravinsky’s “Firebird Suite” and accompanied Audra McDonald for “Somewhere” from “West Side Story.” (Lars Ulrich, the drummer for Metallica, joined in for a portion of the tribute.)

And John Legend, Cynthia Erivo, Ne-Yo and the Jonas Brothers came together for the grand finale of Earth, Wind & Fire’s “September” — with the entire opera house singing along.

The Kennedy Center Honors will be broadcast on CBS on Dec. 15 at 8 p.m. Eastern time.

‘I Lost My Body’ is the Netflix Oscar nominee you likely haven’t seen, but need to

Audrey Withers: The editor who led Vogue through the war