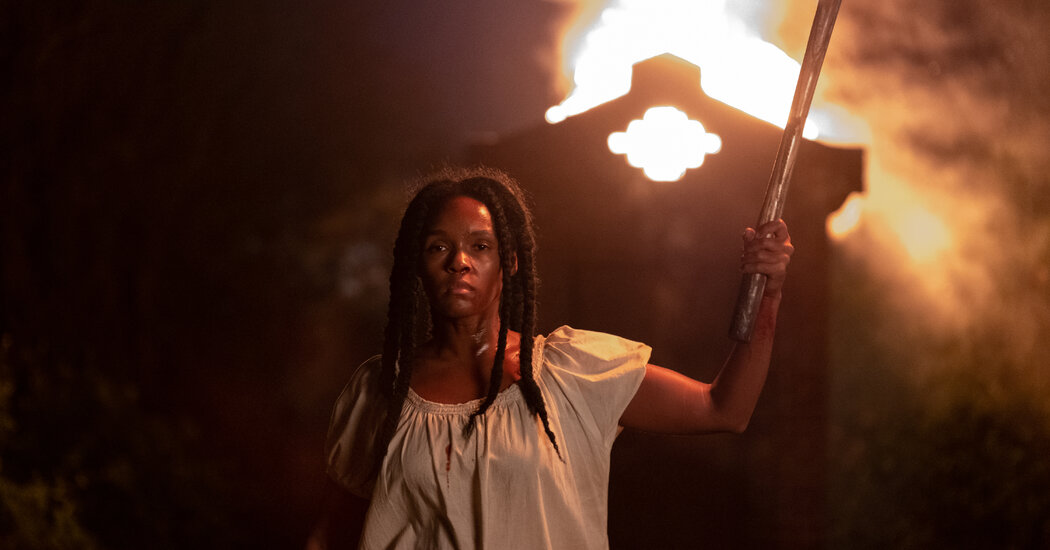 The wittiest thing about “Antebellum” is probably the title, though that also may be, at first, a source of confusion. The opening shot — an extended bit of cinematic bravura that takes in the pageantry and cruelty of a Louisiana plantation — seems to locate the action in the midst of the Civil War. Confederate officers circulate among the belles and the enslaved workers; later there will be some boasting about impending victory over the treacherous “blue-bellied” enemy.

So maybe “Antebellum” refers not to the Civil War that already happened, but to one that may be on its way. A chilling thought, for sure, and one that a horror movie might help us think. In the wake of “Get Out,” there is still plenty of scariness and satire to be extracted from the toxic matter of American racism, and there is great potential in a movie that connects the microaggressions of the present with the brutality of the past.

“Antebellum” is emphatically not that movie. Written and directed by Gerard Bush and Christopher Renz, and propelled by the charisma of Janelle Monáe, it lines up moments of possible insight and impact and messes up just about all of them.

That opening shot, for example, is a demonstration of impressive filmmaking skill tethered to a dubious cause, a sign that what follows will be slick, aggressive and muddle-headed. The camera glides through the grounds, disclosing decorum in the front and brutality in the back. Would-be runaways, including Monáe’s Eden, are subjected to savage punishment, a tableau of torture and murder that doesn’t so much depict dehumanization as participate in it.

The Black characters, Eden partly excepted, are mostly nameless and voiceless, forbidden by their masters from speaking to one another. Instead of singing while they work, they are ordered to whistle. The cotton they spend the day picking is burned when the work is done, a clue that the setting may not be the Old South we’re accustomed to seeing onscreen.

This is a place where Black suffering isn’t the byproduct of economic arrangements, but rather an organizing principle in its own right. The rapes, beatings, brandings and killings we witness are happening for fun.

And not only the fun of the designated villains, who include a Confederate commander (Eric Lange) and a hoop-skirted plantation mistress (Jena Malone). “Antebellum” operates according to the well-established logic of exploitation. The horrors in the first part are there to justify bloody acts of vengeance later on. But the transaction also works in reverse: The certainty of eventual revenge excuses the audience’s voyeuristic excitement at the nasty business that comes first.

If you want to preserve the movie’s surprise — not a very well-guarded secret in any case — you can stop reading now. What perhaps is not surprising is how “Antebellum” presents the lurid spectacle of a woman’s humiliation as if it were a fable of empowerment. Eden, it turns out, is really Veronica Henley, a best-selling author with a Ph.D. in sociology and a life of 21st-century professional and domestic near-perfection.

In between speaking engagements, triumphant television appearances and private yoga sessions, Veronica cocoons with her sexy, devoted husband (Marque Richardson) and their adorable young daughter. On a work trip to New Orleans, she treats herself to a night out with her two best girlfriends (Lily Cowles and Gabourey Sidibe, who supplies nearly all of the fun the movie has to offer).

There are some hiccups and annoyances in Veronica’s mostly charmed life, but she knows how to deal with rude hotel concierges and other obnoxious white people. Her work is full of can-do optimism and abstract buzzwords, painting a future of long-overdue individual and collective victory for Black women like her.

The middle section of “Antebellum,” which is a flashback to the hours leading up to Veronica’s kidnapping and enslavement, portrays her happiness as superficially as the rest of the film presents her degradation. She’s less a person than a signifier — an image of idealized success put on display for the purpose of being trashed.

Who would want to do such a thing? The answer “Antebellum” provides is as shallow as anything else: a bunch of evil racists is who, though the particulars of their methods and motives are left vague. That’s because the real beneficiaries of Veronica’s victimization are the filmmakers themselves, who seem to have reached for easy political relevance without grasping the political implications of what they were doing.

Strictly Come Dancing: How do you film during a pandemic?

Guggenheim Cuts Staff by 11 Percent Ahead of Reopening

A Lakeside Family Vacation Goes Awry in This Debut Novel

Emmys: Our Critics on ‘Watchmen,’ ‘Maisel’ and, Yes, ‘Tiger King’

Masks On in a Near-Empty Hall: Germany’s Theaters Return