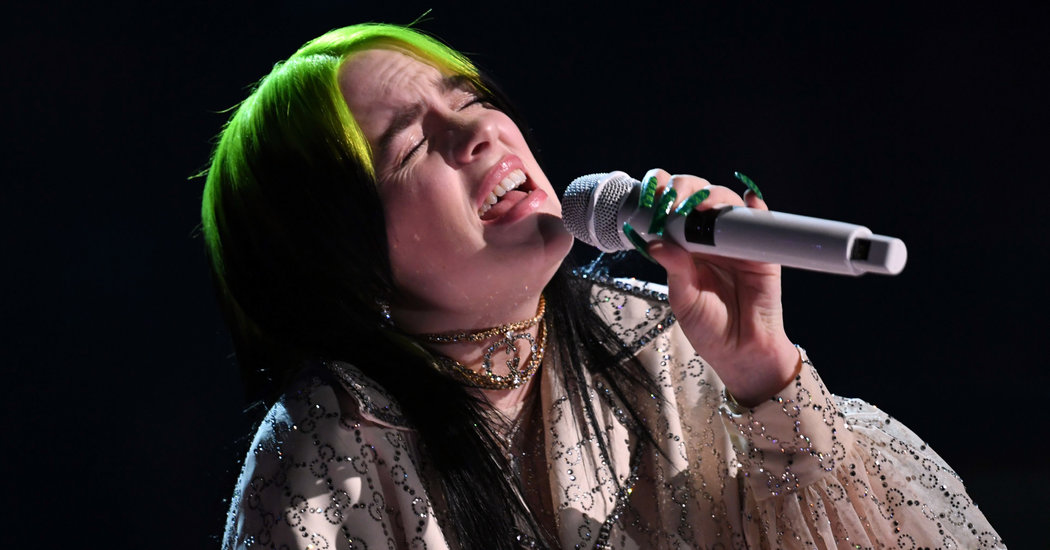 Billie Eilish and her collaborator and brother, Finneas, figured out exactly what goes into a James Bond movie theme, then made the assignment their own. “No Time to Die” has gusts of orchestral melodrama, hints of John Barry’s original soundtracks and a looming sense of fatalism. But it also applies Eilish’s breathy tone — melodic yet lingering just above a whisper — and her adolescent bluntness, as she wonders, “Was I stupid to love you? Was I reckless to help? Was it obvious to everybody else?” JON PARELES

Marian Hill, ‘Was It Not’

You know how when the fog hangs low over the city, the air can feel suffocating and exhilarating all at once? So moist it’s almost cruel? This is that. JON CARAMANICA

Cam, ‘Till There’s Nothing Left’

The song is an arena-country promise of uninhibited back-seat passion: a march with a spacious, booming beat, echoing guitars and a growing chorus of Cam’s voice, offering all she’s got. The video turns it into something much more ominous: one last fling during the apocalypse. PARELES

Migos featuring Young Thug and Travis Scott, ‘Give No Fxk’

On the one hand, this is predictable bloat — the dominant hip-hop stars of the last few years all phoning in second-tier verses. On the other hand, how striking it is that the bloat of the day can sound this strange, this melodically unhinged, this rhythmically unlikely. Plus, in the video, Young Thug is wearing a bondage harness and getting a manicure from a robot nail technician. One thing is clear: Automation will come for us all. CARAMANICA

As a drummer, the young British phenom Moses Boyd plays in cross-stitched, Tony Allen-influenced patterns, as open and rolling as they are forceful. As a bandleader and producer, he piles together deep synths, bass-rattling drum machines and ear-seizing samples; drawing on a vast range of influences from England, Africa and the Caribbean, he compiles a rich pastiche of electroacoustic textures, with a special composite power. “2 Far Gone,” a foray into future house featuring a cameo from the keyboardist Joe Armon-Jones, is one of many highlights — each one different from the next — on Boyd’s first official album, the remarkable “Dark Matter.” GIOVANNI RUSSONELLO

Few rappers sound like they’re having as much fun, lyric to lyric, as Flo Milli. A clever, cheerful lyricist with a voice that recalls “Clueless,” she was sharp last year on her breakthrough single, “Beef FloMix.” But “My Attitude” might be her best to date, a persistently tough blend of aw-shucks sexual candor and eye-rolling dismissals. All her raps are taunts. All her raps are teases. CARAMANICA

Niia, ‘If You Won’t Marry Me Right Now’

Anger, frustration, detachment, desperation, regret, bitterness, self-preservation and cold insight course through “If You Won’t Marry Me Right Now” from Niia’s new album, “La Bella Vita.” The tempo is unbudging; every slow chord change seems to struggle against gravity. She anatomizes a six-year relationship that has just “wasted so much time,” and with production by Niia and Robin Hannibal (of Rhye), each line moves through its own drama: a somber jazz-piano trio, floor-warping synthesizers, swarms of fiercely insistent voices and moments when Niia sounds painfully alone, still a long way from catharsis. PARELES

Each instrument in Carla Bley’s longstanding trio — her piano, Steve Swallow’s electric bass and Andy Sheppard’s whispery tenor saxophone — is both spare and versatile. Every player puts a premium on plain-stated melody, and gently evocative touch. As they entwine, the component pieces never feel amplified or redoubled by each other; there’s a quietness, a loneliness together, that gives this group (which began in the 1990s) its special intimacy. One of the great composers in jazz, Bley wrote three new suites for “Life Goes On,” the group’s latest offering, including “Beautiful Telephones,” with a stalking and circling melody that sounds at once wary and serene. RUSSONELLO

The banjo virtuoso Abigail Washburn studied Chinese language and culture before she took up the banjo, and amid many musical travels, including extended trips to China, she has collaborated since the early 2000s with Wu Fei, who plays the guzheng, a Chinese zither with a throaty tone. They have finally made an album together, due April 3. “Water Is Wide/Wusuli Boat Song,” a Scottish song intertwined with a traditional song from China’s Hezhe people, has their two voices and instruments calling and blending across cultural distances that sound much closer on purely musical terms. PARELES

While living in Rome in 2017, the pianist Jason Moran set about writing a piece a day, mostly short and simple things well-suited for solo piano. He came to record some of them on the Steinway grand at Sant’Andrea de Scaphis, a deconsecrated chapel from the eighth century that has become an art gallery, though it retains its old high-flown ceilings and moldered, exposed-brick walls. The brief and enchanting “For Love” is built on a lapping, ebb-and-flow melody, with a cascading feel that calls to mind his “Gangsterism” series. RUSSONELLO

Leesa mattresses are cheaper for Presidents Day than Black Friday

‘No Time to Die’: Hans Zimmer Takes Over as Composer on Bond Movie (EXCLUSIVE) – Variety