Booker Prize Is Rescheduled to Make Way for Obama’s Memoir 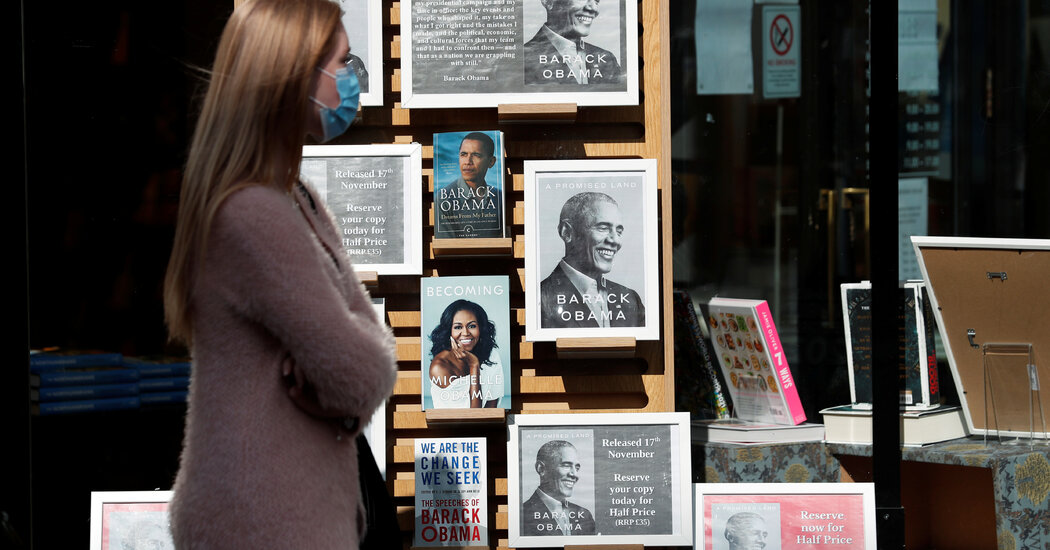 On Tuesday, the Booker Prize said it was moving its award ceremony, previously scheduled for Nov. 17, to Nov. 19 to avoid overlapping with the publication of Mr. Obama’s book.

“We thought it unfortunate that two of the most exciting literary events of the year — the announcement of the winner of the 2020 Booker Prize and the publication of Barack Obama’s memoirs — were due to fall on the same day, so we’ve decided to give readers a couple of days’ breathing space,” Gaby Wood, literary director of the Booker Prize Foundation, said in a statement.

It is unusual for the Booker, one of the most prestigious literary awards in the world, to delay its prize announcement for a single book’s release. The date change highlights how much gravitational pull Mr. Obama’s book has, with a first printing of three million copies and an all but guaranteed status as a mega best seller.

The Booker’s decision to move out of Mr. Obama’s way could also fuel new criticism that the prize, originally established in 1969 to honor writers from Commonwealth countries and the Republic of Ireland, has become too Americanized and increasingly focused on the U.S. book market. American authors have dominated the Booker nominees in recent years, following a 2014 rule change that made any novel written in English and published in the U.K. eligible.

Since the change, the American novelists Paul Beatty and George Saunders have won the prize; this year, out of the six shortlisted books, three are by American writers, while a fourth author holds dual Scottish and American nationality. Two years ago, a group of prominent writers argued that the foundation should ban American authors from eligibility, but the foundation was unswayed.

The Booker, which in previous years has been announced in October, will now be awarded directly after the National Book Awards, which will take place in an online ceremony on Nov. 18, potentially creating a logjam of coverage that could dilute the impact of the prizes.

“With them coming as close as they are to us, of course we’re concerned, we’re worried for our authors,” Lisa Lucas, the executive director of the National Book Foundation, which administers the National Book Awards, said in an interview. “It’s difficult to have a prize like the Booker, which didn’t need to participate in the American landscape in the years before their change, but now you have American books dominating the Booker list. They are now having to function on some level alongside our prizes.”

Both the Booker and the National Book Awards typically provide a sales bump to the winners, but the proximity of the prizes could result in less press coverage and fewer sales, in a year when debut and lesser-known authors are struggling for attention. As the pandemic and shutdowns forced many independent booksellers to close or shift to online sales, a critical outlet that drives discovery for debut authors, poets and writers of narrative nonfiction has nearly evaporated.

This year, debut novels account for four of the six books that are shortlisted for the Booker, including Douglas Stuart’s “Shuggie Bain,” about a child growing up in 1980s Scotland; and Brandon Taylor’s “Real Life,” which centers on a Black gay graduate student. Mr. Stuart was also longlisted for the National Book Award for fiction, along with the debut author Megha Majumdar for her acclaimed novel, “A Burning.” The other four National Book Awards longlists — nonfiction, poetry, translated literature and young people’s literature — all include debut authors as well.

The collision of major literary prizes and events isn’t just bad for marketing and publicity efforts. This year, it could cause significant logistical hurdles as well. Severe shortages at the printing presses, which are under financial strain, have made it even more difficult than usual for publishers to meet spikes in demand for particular titles. Prizes almost always drive sales, and often for titles that were not obvious commercial hits, so publishers and booksellers could be left short-handed.

Awards administrators are dealing with unprecedented challenges this year by moving their ceremonies online and holding judging panels over Zoom. Still, many in the literary world feel there is much to celebrate in 2020, with so many new books to champion.

“The winner is actually books,” Ms. Lucas said. “And getting them into the hands of people.”

Martin Amis Is Committed to the Pleasure Principle in Books

Seven reasons not to give up on poetry