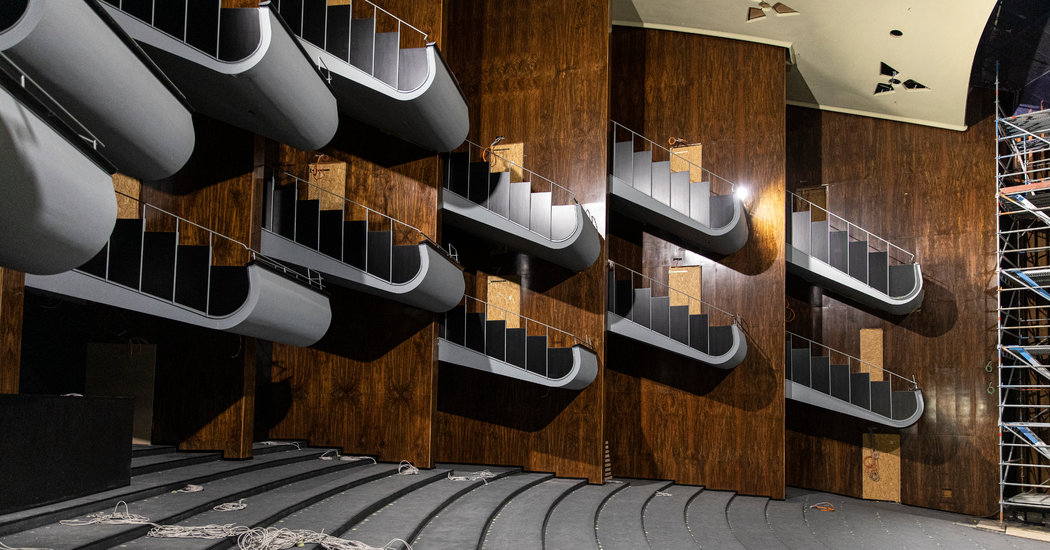 COLOGNE, Germany — “A fiasco,” said a local lawmaker, shaking his head grimly. “A shipwreck,” said a former head of construction for the city. The people of Cologne, known across Germany for their friendly cheer, lose their bonhomie when it comes to the renovation of their opera house and main theater.

Running eight years late and now more than twice over budget, the city building authorities now say they expect to hand over the keys in 2023.

The project has been rumbling on since 2011, when the city approved plans to revamp the 1950s concrete complex that houses both institutions, adding a new studio space and a stage for children’s opera.

But a report by the City Council outlined how rushed, inadequate planning and an oversight structure that left no one clearly in charge spawned a monster in the bowels of the building: a tangle of cables, pipes and ducts, laid by independent contractors working without coordination, that no one could unravel.

“Everyone just laid down cables wherever,” Mr. Wackerhagen said. “No one had overall responsibility.”

Until the authorities work out how to unravel the mess, construction is on hold — as it has been since 2016. Some of the completed work will also have to be torn out and started again.

Rising from a starting figure of 253 million euros, about $281 million, the most recent cost estimate is as high as €571 million. Including interest on loans taken out to fund it, the total bill is expected to reach €841 million.

And the Cologne opera-house saga is by no means an isolated case. Ballooning budgets and years of delay are becoming a regular feature of prestigious cultural construction projects in Germany. For a country that thrives on a reputation for efficiency and engineering prowess, its recent record is sobering.

In Hamburg, the spectacular glass-peaked Elbphilharmonie concert hall was delivered seven years late in 2017. The bill: €798 million, compared with an original budget of €186 million.

In Munich, the cost of renovating the Deutsches Museum, one of the country’s most visited, has spiraled. The federal government and the state of Bavaria earmarked an additional €300 million in November — on top of the €445 million already approved.

In Berlin, where a new airport is also running almost a decade years late, the Humboldt Forum, a showcase for the city’s non-European art collections, has been delayed for a year and is €49 million over budget. The new museum, in a reconstructed royal palace, is projected to cost €644 million if it opens as scheduled this September.

But even that delay and budget overshoot will be modest compared with the renovation of the Pergamon Museum on Berlin’s Museum Island. The work, originally scheduled for completion last year, is now likely to extend beyond 2023. The projected cost has escalated to €477 million, up from €261 million at the outset.

Against this backdrop, it is perhaps unsurprising that plans for a new museum of 20th-century art in Berlin have met with skepticism. Even before a groundbreaking ceremony in December, the costs for the museum, designed by the Swiss architects Herzog and de Meuron, had doubled.

One factor behind these runaway costs is that estimates are often deliberately understated initially to secure political approval, said Prof. Mike Gralla, the head of the construction management department at the Technical University Dortmund.

Such estimates, Professor Gralla said by telephone, represent “the political price” — a figure that is acceptable to the public but may not bear much relation to the actual cost. “Public authorities will only give approval for a project if it is within their budgets,” he said.

Arts projects are often overseen by culture officials in City Halls or state legislatures who may be out of their depth in handling major construction works, Mr. Gralla added. Germany’s particularly cumbersome construction regulations also add to the expense.

A decade-long building boom in the country has brought shortages of materials and labor and, with them, increased costs. Building companies have plenty of orders, and some hesitate to work for state-run bodies that are generally obliged to go with the lowest bidders, Professor Gralla said.

“The firms that offer the highest quality and greatest flexibility are not the cheapest, so they often don’t have a chance,” he said.

Germany’s local, state and federal governments spend lavishly on culture: In 2018, the last year for which complete figures are available, they gave out more than €10 billion in subsidies for the arts.

This is partly because the country is a historical fusion of small states and cities that were once run by princes and nobles, all determined to prove their cultural prowess. It is one reason that Germany has more opera houses than anywhere else in the world: 78, according to the German Theater Association.

The Cologne opera complex, built to replace the original theater destroyed in World War II, opened in 1957. Designed by Wilhelm Riphahn in a hard-to-define, monumental style, somewhere between Bauhaus and Brutalism, it is seen by many as a symbol of the city’s rebirth from the ashes of war.

Cologne’s opera company last performed there in 2012. After a spell in a tent on the banks of the Rhine river, it now performs at the Staatenhaus, a former trade-fair hall.

At the construction site, the stage is fully functional, equipped with hydraulics that allow soundless set shifts mid-scene and computer-operated winches to lift and lower scenery. The machinery must be regularly activated to keep it running smoothly.

The site is costing €80,000 a day while construction is on hold, according to Bernd Streitberger, a former City Hall construction official brought in as a crisis manager in 2016. But it will be more than three years before the state-of-the art technology delights an audience.

A visit below the stage, via a series of concrete staircases, made clear where things went wrong for the renovation project.

One subterranean shaft is a clogged-up jumble of orange and gray cables, some with loose ends, others jammed tightly through a hole in the ceiling. It was already filled to capacity, even though around a third of the cables it was supposed to accommodate have yet to be installed, explained Christopher Braun, a spokesman for Cologne’s city-run theaters, during a recent tour.

Planners have identified 700 “collisions,” where cables and ducts are blocking one another’s routes — and therefore also the air, water and electricity they are supposed to circulate, Mr. Braun said. They are still working out how much of the building will need to be dismantled and rebuilt to accommodate the technical infrastructure and meet stringent fire regulations, he said.

In makeshift offices a short walk from the deserted building site, Mr. Streitberger, the crisis manager, was coordinating a team of 40 people working overtime to formulate the plans.

“The organizational structure had broken down: There was no schedule, there were 63 firms involved, and the main technical planner had been fired,” he said. “We had to start again with all the contracts, we had to build a team, we had to seek a new technical planner. We had a huge problem.”

But then he struck a more hopeful note, saying: “We are back on course. We will solve it.”

Frankfurt and Stuttgart are also planning major upgrades to their opera houses. In November, the state of Baden-Württemberg, of which Stuttgart is the capital, announced an initial budget estimate to renovate and extend the city’s opera house and build an interim theater. The figure — €960 million, providing that there are no delays — is almost twice the budget of the David Geffen Hall renovation at Lincoln Center in New York.

The authorities there say they are merely being realistic.

“This is a very big project, and we want to make the costs as transparent as possible from the beginning,” said Gisela Splett, the official in charge of public building at the state’s finance ministry. “It’s important we lay our cards on the table.”

Call Charles Busch a ‘Drag Legend,’ if We Must Use Labels