Chills, Thrills and Challenging Films: Here Are 10 to Stream 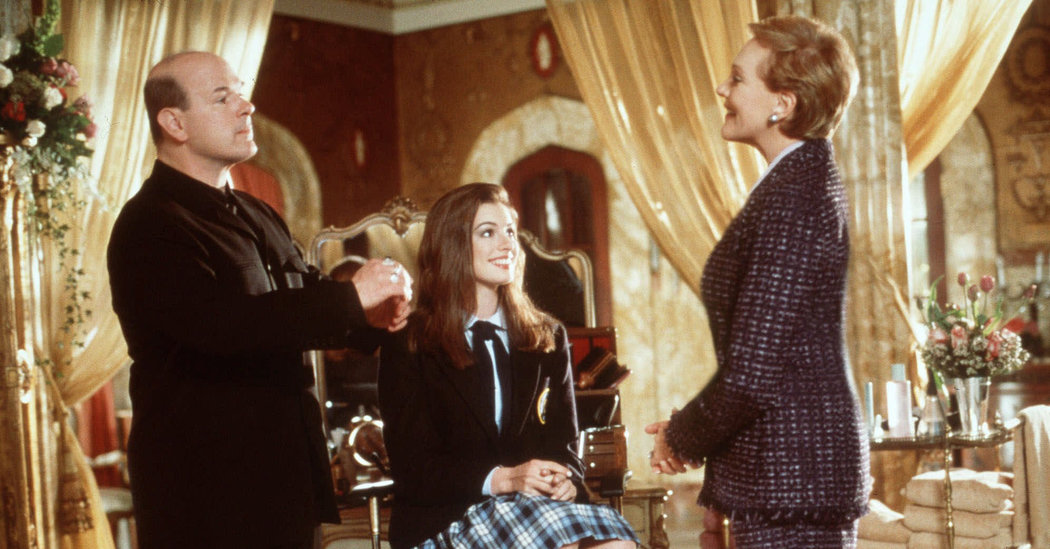 Nineteen years ago, a reluctant royal named Mia Thermopolis (Anne Hathaway) got a generation of girls to fetishize the foot pop (leg-lift action during a passionate kiss) in “The Princess Diaries.”

An awkward high school freshman whose grandmother shows up on her San Francisco stoop and drops the bombshell that — surprise! — she’s the princess of a fictional European kingdom called Genovia, the 15-year-old initially rejects her role as a ruler-in-waiting. (Her response to her grandmother’s pronouncement — “Shut up!” — is hardly canon in the princess playbook.)

But at the urging of her single mother — a free-spirited Caroline Goodall — she agrees to undertake weekly “princess lessons” with her grandmother, Queen Clarisse Renaldi (a regal yet wry Julie Andrews). As the monarch tries to mold Mia’s slouching and sauciness into courtly clout, she discovers that what her granddaughter lacks in grace she makes up for in heart. And Mia comes to see Clarisse as a human being rather than a stodgy head of state.

Mia’s wit, fierce independence and ability to rise to the occasion even when she’d much rather hang out on her fire escape with her 25-pound cat, Fat Louie, gripped me from the first fiasco. I find myself returning to the film during the pandemic as we all lounge on our own fire escapes, whether real or metaphorical. But it’s the supporting turns by Andrews and others that elevate the film to the cinematic equivalent of a warm, gooey chocolate-chip cookie guaranteed to soothe your soul even after seven hours of Zoom meetings. Here are three reasons I keep this rom-com in regular rotation.

The Hathaway-Andrews Battle of Wills

In scene after scene, Mia and her prim and proper grandma match wits and trade repartee. Andrews is a closet sass-master whose exasperated comebacks occasionally conquer her granddaughter’s endless loop of lip.

Andrews made her name as Henry Higgins’s cheeky pupil, Eliza Doolittle, in “My Fair Lady” on Broadway in 1956. But as a queen tasked with whipping her sulky granddaughter into shape, her firm approach isn’t without humor.

When Mia’s clunky Mustang dies halfway up one of San Francisco’s Russian Hill steep streets, sending her and Clarisse sliding into a cable car, the queen knights a police officer with the fictitious Genovian Order of the Rose, saving Mia from a ticket. An awe-struck Mia declares, “You are the coolest queen ever!” — a pronouncement she quickly forgets when Clarisse chews her out after the paparazzi corner her clad in only a towel at a beach party. But in the film-long feud of royalty vs. rebel, the conflict is one of exasperation rather than true enmity.

Everything About Joe (Or Joseph. But Never Joey.)

Héctor Elizondo’s Joe might be the best perk of Mia’s princess-ship: The head of Genovian security never panics; he gut-checks Clarisse when he thinks she’s being too harsh on her granddaughter; and, in a major wingman move, swoops in mid-thunderstorm with a limo to escort a soaked Mia to her inaugural ball. (True, her car has broken down, but he also guessed she’d try to run away.) He gets all the great one-liners as Mia’s chauffeur, bodyguard and eventual father figure. (“I’ve never put on pantyhose, but it sounds dangerous.”) The princess and the queen may be the main players, but as the counselor to both, Joe is the emotional linchpin of the film. Just don’t call him Joey.

In her silver-screen debut as a self-styled dork, Hathaway has the comedy chops of a stand-up star coupled with the vulnerability of a teenage girl who can’t figure out how to speak in front of more than two people without shaking. Genovia’s heir apparent may be scatterbrained and socially awkward, but she’s committed to her alternately endearing and exhausting tornado force of a best friend, Lilly Moscovitz (Heather Matarazzo). And I cheer raucously every viewing when Mia “cones” the queen bee cheerleader Lana Thomas (Mandy Moore). I love a well-deserved comedown.

Watch on Amazon, iTunes or Vudu.

Chills, Thrills and Challenging Films: Here Are 10 to Stream

Sacha Baron Cohen Duped Them. Here’s What They Did Next.

Horror Masks Are Never Just About the Monster

Where to Stream Carl Reiner's Best TV Shows and Movies

Walter Lure, Guitarist for a ‘Mythical’ Punk Band, Dies at 71