Conversations With Friends (Who Are Also Writers) 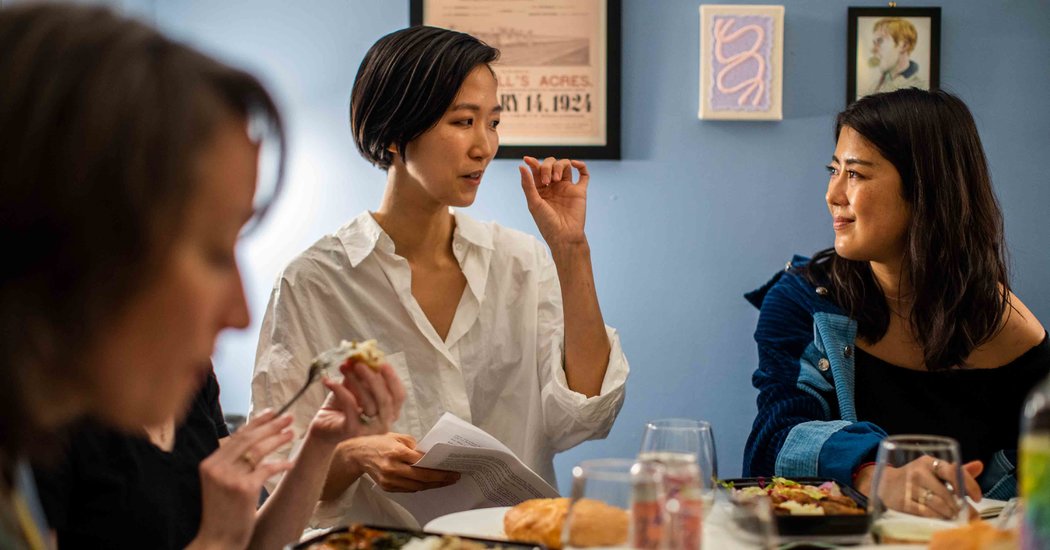 Jenny Zhang was in sweatpants, wrestling one Sunday afternoon with a short story that wasn’t coming together. She typed out an email to seven other writers: “Yo. Can we meet up next week? I have something that I kinda semi-urently” — the g key on her keyboard was broken — “need help on.”

The story, which jumped back and forth between plotlines, was intentionally nontraditional, and she didn’t want to lose that. The peers whose advice she sought, she said, “would let the jagged edges remain” while making the story “better than it was.” When she met with them, they helped her find the thread in the story, which she finished and included in her 2017 book “Sour Heart.”

Writing is often considered a solitary act, but some writers have figured out a way to make the process more collaborative even before editors, agents and other publishing professionals get involved. Zhang’s group, which includes Alice Sola Kim, Karan Mahajan and Tony Tulathimutte, has been meeting about every month since most of them were undergraduate students at Stanford University. Their sessions are highly structured, with deadlines for submitting drafts and detailed manuscript notes, while other groups gather more informally to talk about their careers, commiserate over deadlines or gossip about the publishing industry.

“You will feel like writing is very lonely and very difficult and very frustrating and that you don’t really know what you’re doing,” said the Chicago-based writer Mikki Kendall. But in a writing group, “you can talk to other people in that place and that are feeling their way out.”

For Zhang, the group grew out of a need for a more supportive space than the ones she was encountering in creative-writing classes.

“There would be, like, racist stories being put up and praised in workshops,” she said. “I didn’t have adults or published writers to look up to, so it was nice to have this horizontal space.” Over the years, aside from editing one another’s work, they’ve also turned to each other for advice on choosing an agent or applying to writing residencies.

That these groups are self-selecting means they can be modeled after their members’ specific needs. Last year, David Greenberg, who teaches history and media at Rutgers University, was on sabbatical working on a biography of Representative John Lewis when he decided to form a writing group to keep him accountable. He emailed about a dozen academics and journalists who specialized in history, and most of them were game.

“We have a certain degree of expertise and knowledge about both content and approach that makes it a particularly informed, high-level discussion,” Greenberg said. Critiquing a chapter of a forthcoming Judah Benjamin biography by James Traub, another member of the group, “We got in a big discussion about slavery and Benjamin’s slave-owning, and it led someone to encourage him to draw a more detailed portrait of slavery in New Orleans, where Benjamin lived.” One of the members also recommended a recent academic paper that helped Traub’s research on the topic.

Mira Jacob’s critically acclaimed graphic memoir “Good Talk,” which reflects on her life through the lens of race, sexuality and identity, came about partly through challenging discussions with her writing group. She left an earlier one, she said, after a member dismissed an early draft of her book as an example of what “was ruining America.”

Her new group, which includes the novelists Alexander Chee and Julia Phillips, is made up mostly of people of color, and Jacob said their conversations resulted “in my most vibrant book.” “Good Talk” closes with an open letter to Jacob’s young son, whose questions about race and politics frame the book. At first, Jacob said, the writing was made more difficult by her anger at having to write it, but the group pushed her to go deeper: Who was the anger directed toward? What did it mean to be angry in a letter to her son? What exactly was she trying to convey?

“I know I was really raw when we talked about it. I know I was kind of terrified. But I know also I never would’ve even gotten to that place with the other group because the only thing I would’ve been doing the whole time is saying, ‘No this is real,’” she said. “Writing for the voice that demands complexity of you and nuance of you, that makes you a better writer.”

Other groups get into everything but writing. The one that Ingrid Rojas Contreras, author of the novel “Fruit of the Drunken Tree,” belongs to doesn’t exchange work at all, instead focusing on providing mutual support and resources. Members take turns hosting each other in their Bay Area homes, cooking, drinking wine and sometimes using tarot cards for fun to answer career questions.

“I was interested in having community,” Rojas Contreras said. “Sometimes when you’re exchanging writing, that can be all that it becomes.”

But for Zhang and the other members of her group, there is value in developing long-term relationships with each others’ work, and it has helped them analyze how their writing is evolving over time. “It’s just a really deep and rich context,” Zhang said.

In October, they gathered in Tulathimutte’s Brooklyn living room, spreading takeout containers and open bottles of Brooklyn Lager and La Croix, to discuss one of Zhang’s new stories. The critique was frank (“I felt all over the place in the first few pages,” one member, Anna North, said) but meant to be helpful, not snarky. Tulathimutte noted that a side character was being used as a plot device, and in one case, the group went back and forth discussing just one line.

That session was the first time Zhang had felt comfortable submitting something that still contained some typos and redundancies — but that she knew would benefit from feedback from people she trusted, she said. “I was like, ‘It’s O.K. with these guys.’”

Can Stormzy, an Evangelist for British Grime, Seduce the U.S.?

Can Stormzy, an Evangelist for British Grime, Seduce the U.S.?